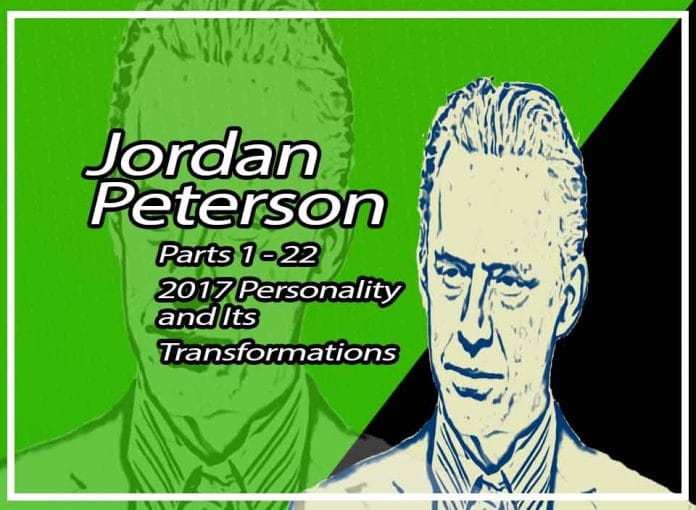 Hey I am Aki following a debate over the dinner table I decided to look into the so-called monster Jordan B Peterson and find out what all the fuss was about. Following a short review of his works, I settled on the Personality and Its Transformations series. If you follow the links in this article they will take you to the article with my opinion and also my study notes were taken while watching.

I won’t spoil anything but I promise not to pull any punches.

The combined lectures 02 and 03 of Peterson offer some historical context for the understanding of personality, suggesting that the clinical theories concerned with the transformation and improvement of personality and character are based on a classic narrative/mythological structure.

In this lecture, 04 and 05 combined, Peterson discusses the relationship between the initiatory structure typical of shamanism and the process of radical personality transformation, whether self-initiated or induced by a therapist. Order/paradise, chaos/the fall, re-establishment of order/paradise: this is the basic structure. The true paradise, however, is the identification with the transformation process itself, since all paradises fall.

In this lecture, Peterson discusses the great developmental psychologist Jean Piaget, who was mostly interested in how knowledge is generated and transformed. His analysis of how morality develops in children, which links early play with social cooperation and competition, is particularly profound.

The purpose of this lecture is to illustrate the basic psychological principles and theories of Dr Carl Gustav Jung, a student of Nietzsche and Freud, creator of analytical psychology, and a great interpreter of mythology and archetypes.

Peterson concludes his analysis of Disney’s Lion King, which contains many archetypes that Carl Gustav Jung identified and analyzed. Jung was a student of Nietzsche, a student of Freud, and the creator of analytical psychology.

09: Freud and the Dynamic Unconscious

Peterson discusses some of Sigmund Freud’s key theories in this 9th lecture, concentrating on his concept of the dynamic (living) unconscious in this lecture.

Freud and the Dynamic Unconscious Part 9

Peterson introduces us to Dr. Carl Rogers, a humanist psychotherapist in the phenomenological tradition, who was an expert in listening and embodied wisdom. On the value of truthful relationships, Dr. Rogers offers profound and practical lessons.

Peterson addresses the giants of existentialism in this lecture, the 11th in the 2017 series, which takes the philosophical position (1) that psychological distress and illness are inherent in Being itself, and (2) that taking responsibility through action is the appropriate response.

In this lecture, the 12th in the 2017 series, Peterson explores Heidegger’s phenomenological philosophy of Being through the interpretation of psychotherapists Ludwig Binswanger and Medard Boss. In phenomenology, the aim was to reduce the painful separation between object and subject which, among other consequences, led to the loss of meaning from existence.

13: Existentialism via Solzhenitsyn and the Gulag

Peterson illustrates the sociopolitical consequences of an individual’s inauthentic life in this lecture: the degeneration of society into nihilism or totalitarianism, often murderous in nature, using the work/death camps of the Soviet Union as an example. Additionally Alexander Solzhenitsyn’s The Gulag Archipelago. It has been called one of the greatest books of the twentieth century.

Existentialism via Solzhenitsyn and the Gulag Part 13

During this lecture, Peterson discusses the development of modern trait theory. Several psychological traits such as extraversion, neuroticism, agreeableness, conscientiousness, and openness to experiencing new things were discovered by psychologists with expertise in measurement and statistics, and the process of describing their physiological basis began.

Here, Peterson discusses the relationship between brain function at a deep level, as well as the five psychometric traits.

Peterson discusses the Big Five trait of agreeableness in this lecture, which represents the care system in the terms of Jaak Panksepp. It can mean cooperating versus competing, or complying versus not complying, or being tender-minded versus being tough-minded. Political correctness is also an important determinant of political beliefs, being the key element of a body of ideas referred to as politically correct.

In this lecture, Peterson discusses the Big Five trait of openness to experience, which is an amalgam of creativity and intelligence. Furthermore, Peterson discusses IQ: how it is measured, what it means, and the powerful impact it has on long-term life success, as well as the highly skewed Pareto distribution of creative production.

Peterson concludes his discussion of the Big Five trait of openness to experiences, which is an amalgam of creativity and intelligence. Furthermore, he discusses IQ: how it’s measured, what it means, how it predicts life success, as well as the highly skewed Pareto distribution of creative output.

Peterson details in this lecture how trait conscientiousness is the best predictor of success in life (especially for managers, administrators and students). That makes sense, right? Consciousness is made up partly of aspects of orderliness as well as industriousness, and orderliness relates both to disgust and to authoritarianism (especially among those low in openness to experience).

Peterson discusses the difficult and thorny problem of predicting performance (in academic, industrial, creative, and entrepreneurial settings); the practical utility of such predictions, in business and other environments; about the high economic value of accurate predictions (in hiring, placement, and promotion).

In this lecture, Peterson wraps up the 2017 Introduction to Personality and its Transformations. He discusses the psychology of belief and describes the individual’s potential and reality. Symbolically, yin and yang, order and chaos, are yin and yang to human beings, which evolved to live on the boundary between exploration and exploration-bound territory. There is freedom of information, maximization, and the discovery of meaning that relieves the tension of tragedy.

Jordan B Peterson Challenge – Why He Offends So Many

Following a dinner party debate Jordan Peterson came up, and one of my friends, well, a couple literally raged about him. The level of the outrage got me thinking about how one person can be so divisive yet still have a platform? Have to start somewhere in my expose on Peterson and his alleged crimes against humanity. I found a 2017 Personality and Its Transformations from the University of Toronto and have decided to break down what I saw and call out anything I find that smells fishy; before this journey, I had not previously heard of Jordan B Peterson. What you will find are the rough notes I have taken while watching the video and some major takeaways, plus anything that needs to be called out will be called out.