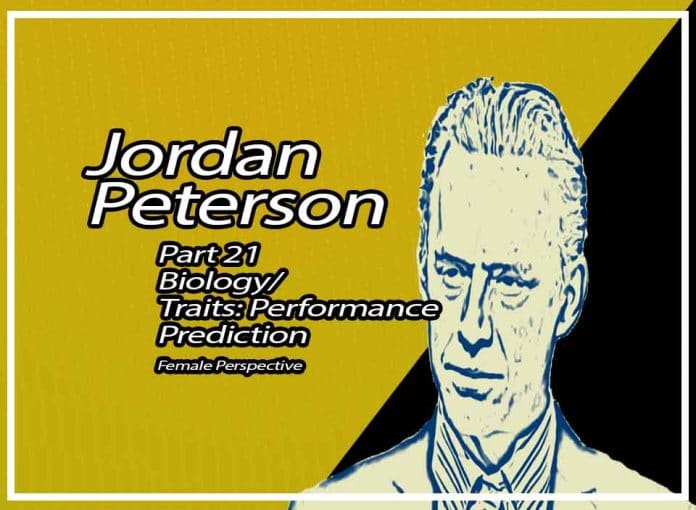 Welcome as were near the end of my Jordan Peterson experiment, have I found some of his material confronting? Yes. Offensive? No. He so far has shown a level of articulation and delivery most of us can only dream of and his work has made my life journey a little better in case you missed my last review and study note check them out here:

In this lecture, Jordan discusses the hard problems of predicting performance: academic, industrial, artistic, and entrepreneurial; the practical application of such prediction in business and other situations; and the enormous economic worth of accurate forecast.

Rather than attempting to change your temperament, match your career to it. Although considerable adjustment is possible, the five personality traits and IQ are strongly influenced by biological factors (particularly in environments where differences are allowed to flourish).

Holland, for example, has a rather open admission policy right now. That means that everyone has the opportunity to attend college. However, the failure rate in the first year, for example, is now very high; you could argue that this is a perfectly reasonable price to pay for open admittance and the opportunity to give everyone a chance. But you could also say, Well, that’s a waste of time for people who flunk their first year of college or university. It’s not an enjoyable experience for them. It’s incredibly expensive in terms of time, effort, and resources. And perhaps it would have been better for them and society if they had been able to discern whether they possessed two sets of attributes that were required to boost their chances of success.

There’s the practical utility of potentially offering to schools, universities, and workplaces, in general, the possibility of picking people with a higher than average chance of success. It’s much more problematic, for instance, if you’re choosing not so many entry-level personnel in a company since you may persuade yourself that you’re more interested in bringing in more individuals and letting them fail or succeed in the job.

As you flatten out the sociocultural environment, suppose you take everyone and provide them with optimal nutrition and optimal access to information, which you’ve pretty much done, by the way, with a computer, right, because how do you give someone more access to information than to provide them with a Web-enabled computer? To learn more, click https://youtu.be/Q7GKmznaqsQ?list=PL22J3VaeABQApSdW8X71Ihe34eKN6XhCi .

Wow again this should be mandatory for school leavers, what value can you add and have some pride in what you do. Also, I love how he explores the workplace dynamics and acknowledges work distribution. However, it works both ways and just because someone has money does not mean they should be able to lord over you.

Carl Jung and the Lion King (Part 1) Jordan B. Peterson...