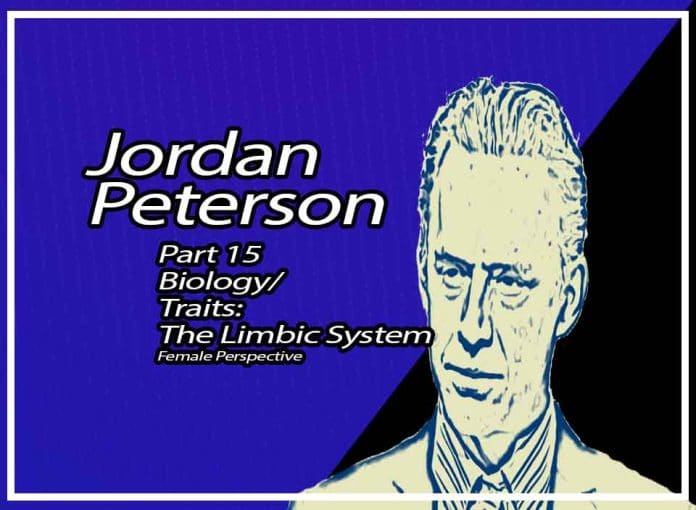 Yesterday I have to say that while Peterson took a less storytelling approach he managed to explain the concept of the Big 5 well, and in a way, they add value. In case you missed yesterday you can check it out here:

Peterson has court my attention with this title, the Limbic system, as you know our limbic system is responsible for our behavioural and emotional responses, especially those needed for survival: feeding, reproduction, and raising our young, as well as fighting or fleeing. I often wonder who it really in charge. Lets get into it:

Biology/ Traits: The Limbic System – A Personality Guide By Jordan B. Peterson

As we move toward more biological aspects of the personality, we move forward more deeply in physical theories and other such findings that help us understand clinical psychology and its practical aspects. This lecture aims to introduce the discussion of the link between deep, subcortical brain function and the presence of the five qualities discovered by psychometric researchers, which will continue in subsequent lectures.

Once you define a term in psychology, it should be accurate to the atomical to pharmacological level.

Jordan used several papers by well-known psychiatrists and biologists to state the fact. The research includes A model of Limbic System and basal ganglia: Applications To Anxiety And Schizophrenia by Gray J.A. The report was published in 1995 at Gazzaniga. The study also includes The Cognitive Neurosciences, published through Cambridge MIT Press. The paper consists of the findings of the behavioural and personal informational processing which the Limbic System processes. It also includes the involvement of the dorsal and ventral systems to generate emotions affecting a person’s personality. Besides these theories, there are a number of more theories you can look for that are discussed by Jordan in the lecture.

Jordan shows an illustration video known as the Monkey Business Illustration. The video has a number of players wearing white and black shirts. Team black passes the ball to each other while team white passes the ball. The task is to count the passes made by team White. The game starts, and after several passes, a Gorilla appears on the screen. People noticed the Gorilla as it just came in the middle of what you focused on. Besides this, we missed some further changes due to the focus on the ball. Gorillas are also only noticed due to the interference in the focused object. A player left the game, and the colour of the curtains changed, but the person did not see any such change. The fact is that the whole focus is on the triggered object, and the sub-objects grab no attention. A big difference is also not noticed by the brain.

Here you go with the video link to Jordan’s lecture so you can easily go for detailed information.

Very interesting and well worth my time, he has not at this point near 3/4 through his lectures shown me any red flags, in fact, he seems like quite a normal guy who is incredibly smart. You will love this one how he engages the topic and makes a complicated system understandable. This lecture was from 2014, but the message was clear.