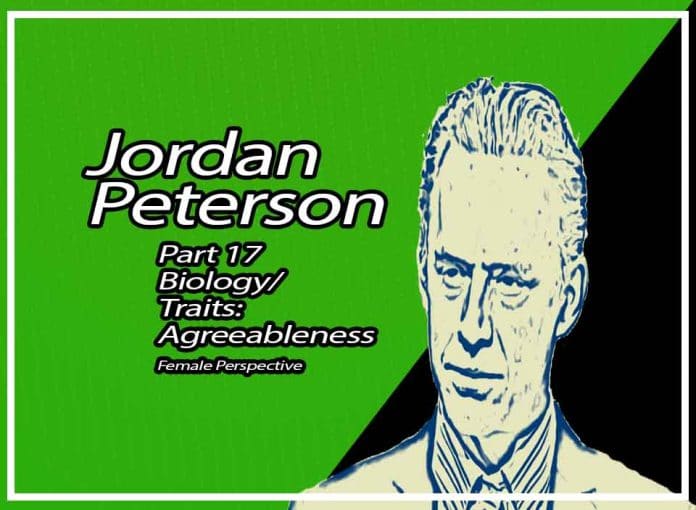 I am nearing the end of the series and certainly think I will watch this again, it feels like you are getting really good value for your time. I am so glad I sated this journey, however if you are just tuning in this is a series of lectures by Prof. Peterson and here is my previous breakdown:

Looks like today will stay with the Big Five with a particular focus on agreeableness, lets see what we get:

Biology and Traits: Agreeableness – A Personality Guide By Jordan B. Peterson

Jaak Panksepp’s terminology refers to the care system as a “dimension” of the Big Five feature agreeableness, which Jordan discusses in this lecture.

Cooperation vs. competitiveness, compliance vs. non-compliance, or tenderness vs. toughness are possible interpretations. Furthermore, it’s a key factor in determining one’s political views since it’s most closely related to the school of thought known as politically correct. When it comes to politics, folks who are more agreeable prefer to see the world as an innocent child versus a reptile predator. This may be a good thing if you’re an innocent newborn as a reptile predator.

To know if you are an agreeable person or not, Jordan reads out the top-marked questions from the Big Five Aspects Scale. According to the big five, you are interested in other people’s problems, so you are an agreeable person. But there should be a limit in this case. It is better to be emotionally stable than to be neurotic. It is still a mark of compassion in your personality.

Further traits of agreeableness include respecting authority and following the rules. Feel others’ emotions is a bright part of a kind person’s personality and is considered a positive trait. Ask people about their well-being and shows your compassion.

On the other hand, if you are less agreeable, you take advantage of their needs and do not get bothered by other people’s needs. All of these are normal distributions of personality and their stages of agreeableness.

Agreeableness and disagreeableness are two facts that might overlap at some points but still conflict on some points. If we talk about genders, men are less agreeable while women are more friendly and understanding. There is a very less middle in the case; both the genders are at their extreme. This is the fact behind the reason that more men are in jail as prisoners as compared to women.

If there is an agreeable person, he gets agrees, and it is convenient to talk. This can be bad at times. Jordan offers the example that if you are an employee and want a salary increase, this might become hard for you to get a salary increase. A disagreeable person is more likely to make correct statements and get a boost. But being too unpalatable can put you in trouble, or you may get fired. It is better to maintain a relationship between both. Here you go with the link for further details on the topic. https://youtu.be/G1eHJ9DdoEA?list=PL22J3VaeABQApSdW8X71Ihe34eKN6XhCi

I would say this rings true, I guess in the modern world he has delineated between men and women saying that there are differences between the two. Well, not shit Sherlock there are huge differences, and I am not surprised that you can group certain attributes together. Everything he said here has some form of an evidence base to support it and certainly rings true. However, I can see how some people may even think it’s insane to be offended by this. Remember don’t work in extremes you will find extreme stuff, focus on the numbers and then you will get an objective truth.