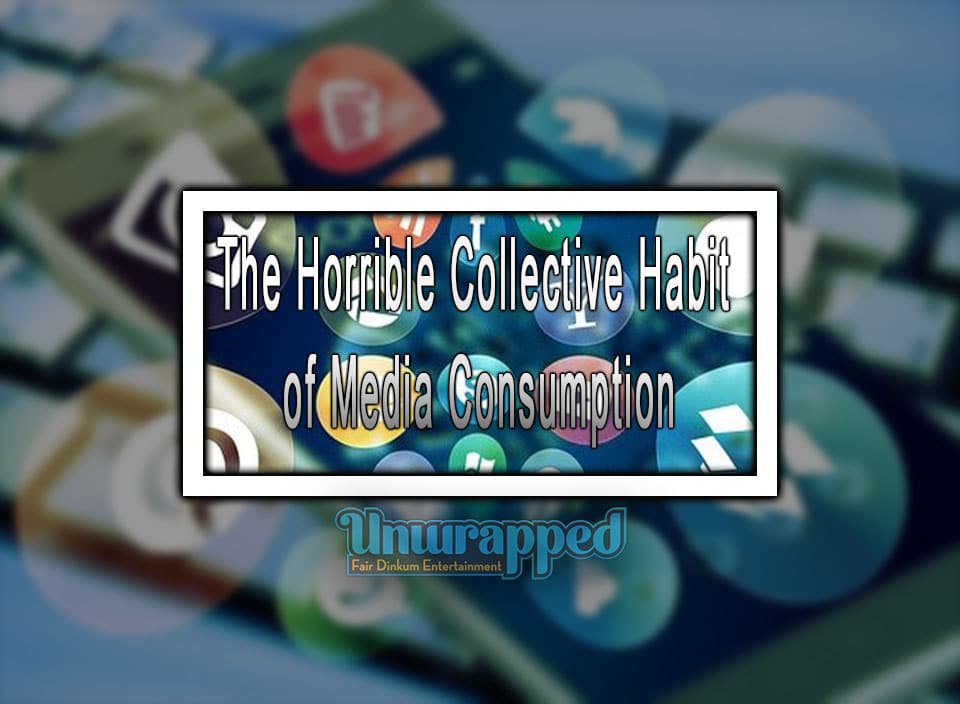 It’s a passive hobby that many enjoy. Many individuals find it relaxing to head home, switch on the TV, and binge on some breaking news. It’s a way to kill time before another day of work. Few people have other hobbies that they can rely on for that purpose…

If only it were beneficial to us…

is, unfortunately, one of the worst habits you could adopt. As we just mentioned, it’s a time-killing habit. It’s something you do because you have nothing else to do. That’s about all there is to it in benefits.

As for harms, media consumption ruins your mind and emotions. It’s also a brainwashing tool that affects many aspects of our life negatively.

We’ll be discussing those harms in-depth through this article…

Media consumption is dominated by 2 things. The 1st would be an overload to your brain’s pleasure receptors. The 2nd would be advertising.

The nature of media consumption means that you need more excitement to attract views. That, or you had to be monotonous to get your point across to watchers.

Excitement is what you’ll find with entertainment that gets more bizarre over time. It’s a trait of electronic media, especially since it affects people of all age groups.

By “affect” here, we mean damage to our bodies…

Consider the following research, which discusses the effects of TV and gaming on children (1). The results show that sleep patterns and efficiency are damaged by consumption. We’re talking about children here, not old aged individuals with slowed cognitive functioning…

Sensational excitement is a core aspect of media success. Without flaring every detail into a large drama, media forms lose their views. Even realism gets sacrificed in the process…

You see, the media’s focus is not just on entertainment, but also conditioning. Media forms condition your brain to accept certain values by repeating messages constantly.

This often works, especially on youth who are seeking information on socially adaption (2). Realism has no value in the brainwashing process. The more repeatable the information, the greater its effects on people’s idea of adaption.

The repeatability technique is a vital aspect of media advertising. The general nature of advertising itself is to brainwash by repetition. No ad ever works when a person sees it once…

Thus, not only are your value sets programmed out of your control, but you also have a hole in your wallet.

How often do you open your TV or newspaper to find good news? Almost never…

The good news doesn’t sell. There’s nothing exciting to the masses about celebrating joy for another. There’s not much to get happy about for a fortune that’s not ours.

Thus, happiness is damaging to the sensationalism needed to sell. What you end up with instead is a lot of negative news. And it’s not just minor negative news. It is news that stresses you out, putting you in state of panic…

Examples include news events such as political scandals, price hikes, etc. Such information puts you in fear over facing large scale economic and political shifts.

Consider the 9/11 attacks as an example. Research shows that individuals who were far from the attack suffered stress after seeing the events on the news (3). Terrorist events like 9/11 have constantly occurred ever since.

The Boston Bombings that happened in 2013 is an example of that. Airing such an event may have caused stress too…

You then have the problem of high standards. The media is riddled with information on celebrities whom we could barely match up to. We constantly hear of new celebrity success. We are exposed to images of attractive celebrities that we could never copy.

The high standards are dangerous since they lower our self-esteem. The thousands spent on celebrities is barely something the average person can afford. The self-esteem drop also adds to our stress.

You Need Ways to Inform Yourself, Without Stress.

Long-story-short, the media will wreak havoc on your mental tolerance. Your nerves will turn into bundles of anxiety transmitters from excess media use…

Yet, it is challenging giving up media use. It’s not just addictive. It’s also a source of information that we “sometimes” need to cope with life.

Thus, it is our responsibility to “dilute” media information through appropriate analysis techniques. We’ll be mentioning those techniques to you below…

Your first method of reducing media emotional stress is to look for polar arguments. More often than not, media sensationalism will involve bias in reporting. One side of the argument will be favored over the other.

To get the emotional aspect out of the picture, try to be objective. Listen to the other opinion, and turn the news piece into an intellectual pursuit.

This will be done through the internet, seeking alternative media sources. Try to look for opinion pieces that are not mainstream. When doing your due diligence, avoid large public media institutions. By this, we mean newspapers and TV.

That exercise also has the effect of reducing brainwashing. When doing your research, seeing both sides of the argument increases your factual accuracy. After all, to make a final decision, you’re going to be digging for the facts.

Handling Media Stress: How Does the News Affect Your Life?

The answer to that will be “almost never”. A lot of the news you consume has no bearing on your finances whatsoever. This applies to celebrity news, and especially loved media consumption variety. Avoid celebrity news and any type of news that doesn’t affect your life directly.

Instead, adopt useful habits for information gathering that doesn’t involve the media. For example, you can learn a predictive analysis of events around you. Instead of waiting “to be surprised” by negative breaking news, why not predict it first?

Of course, consider that it’s an educational journey before anything else. It teaches you to be independent of other peoples’ opinions.

It’s a vital skill you’ll need if you want to free your mind from the chains of the media!

Investing in Australian Real Estate; The Need For Due Diligence

How To Increase Immunity: The Importance Of Nutrition

5 Tips To Recover From The Holidays With Health