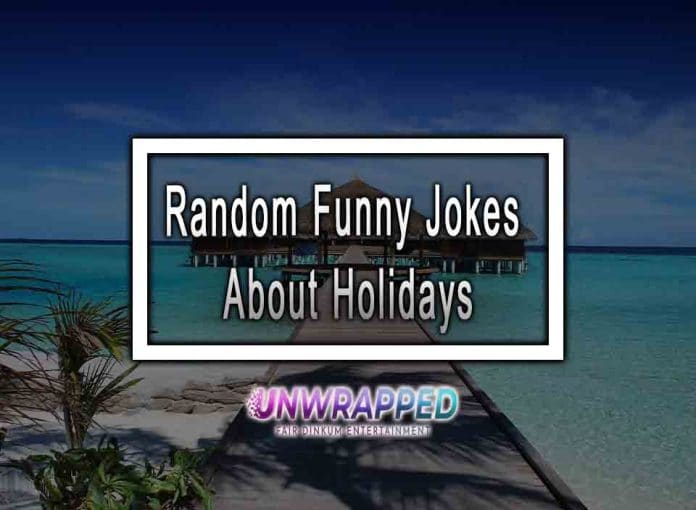 Ready for a laugh? I have collected from around the internet some of the funniest random jokes on Holidays. See below 10 side spitting (or not) jokes on holidays.

“I wanted to sue the airline because they damaged my luggage.
I showed the badly damaged remains to my lawyer.
He said, “”You don’t have much of a case.”””

“My wife and I just had a blazing argument over the phone.
She’s accusing me of being a money waster and now she’s genuinely worried that the kids will miss out this Christmas.
It’s put a real dampener on my trip to Las Vegas.”

“The hotel I was staying at last night screwed up my booking so they had to put me in the honeymoon suite.
It was excellent. I was staying with a lovely young couple from Devon.”

What’s the betting that most of these people moaning about being stuck abroad are the same people who usually come back and complain that a week wasn’t long enough.

“I told my wife to spin the globe, put her finger on it and wherever it lands that will be the holiday destination.
”Ooooo!” she says excited, ”Looks like its the Caribbean.”
”Great .” I replied, ”Now lets see where I’m going.””

Remember! Christmas is for months, not just for Christmas.

“Me, my brother and parents went on a holiday to the lake district last week. There was a constant whining noise all the way there.
To sort the problem, my dad kicked my mom out at the service station.”

“I went to Blackpool on holiday and knocked at the first boarding house that I came to.
A women stuck her head out of an upstairs window and said ‘What do you want?’.
‘I’d like to stay here’
‘Ok. Stay there'”

“I was on holiday sunbathing when my wife started rubbing something in my back.
She said ‘this will make you brown’
I said ‘Oh what is it?’
‘Gravy'”