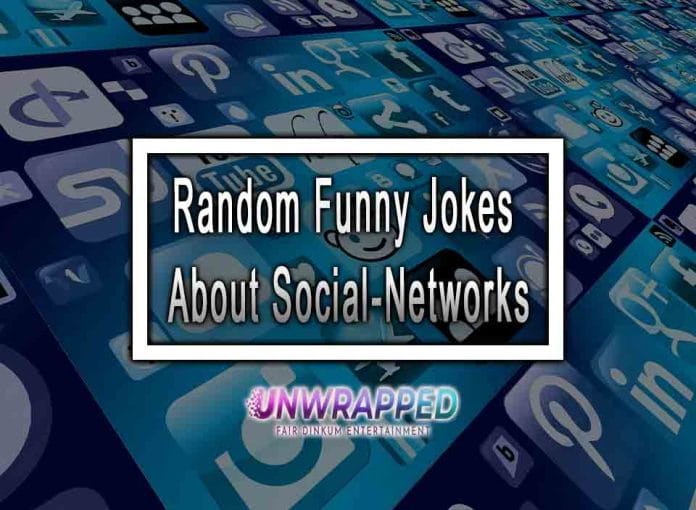 Ready for a laugh? I have collected from around the internet some of the funniest random jokes on Social-Networks. See below 10 side spitting (or not) jokes on social-networks.

“A religious person came up to me the other day and asked me if I believed in evolution or creationism.
I replied “”I believe in evolution. How else would Charmander become Charizard?”””

“Ok, so this girl on Facebook posted a status which read:
“”How can I get rid of this morning sickness?””
Turns out replying, “”Try a coat hanger”” is a good way to get yourself deleted.”

“A hacker attack briefly shut down Twitter on Thursday.
Millions of twitterers were forced to talk to each other the old fashioned way.
Through Facebook.”

“I think real stalkers would be insulted by people who call themselves “”Facebook stalkers.””
Oooh, you click around on different profiles hoping to find tagged pictures of that cute babe you met in a club. You are so edgy and dangerous.
Try camping out in front of Cheryl Coles’s house wearing a nappy and night vision goggles then maybe we’ll talk.”

“I almost forgot to update my status that I’d been to the gym.
What a waste of a workout that would have been!”

“I recently played ‘FarmVille‘ on Facebook, even that game has a sense of humor. I created a black character with a large afro and planted some cotton.
Or, if you wait a few days, you can hire another black person to pick the cotton for you. Remember, you don’t pay him so you make 25% more money!”

“I was just thinking,
Could I grow weed in FarmVille then sell it on Mafia Wars?”

“I hate it when couples have a little argument and the girlfriend changes her Facebook status to ‘single’.
I mean, I have arguments with my parents all the time, you don’t see me changing my status to ‘orphan’.”

“I just tried to log on to the the Ethiopian version of Facebook.
It said, “”Sorry, no feed available.”””

“I added my friend Jamal as a neighbor on Farmville yesterday.
I logged on this morning to find that all my chickens had been stolen and he’d opened up a KFC.”