The Horrible Collective Habit of Taking on Too Much Debt 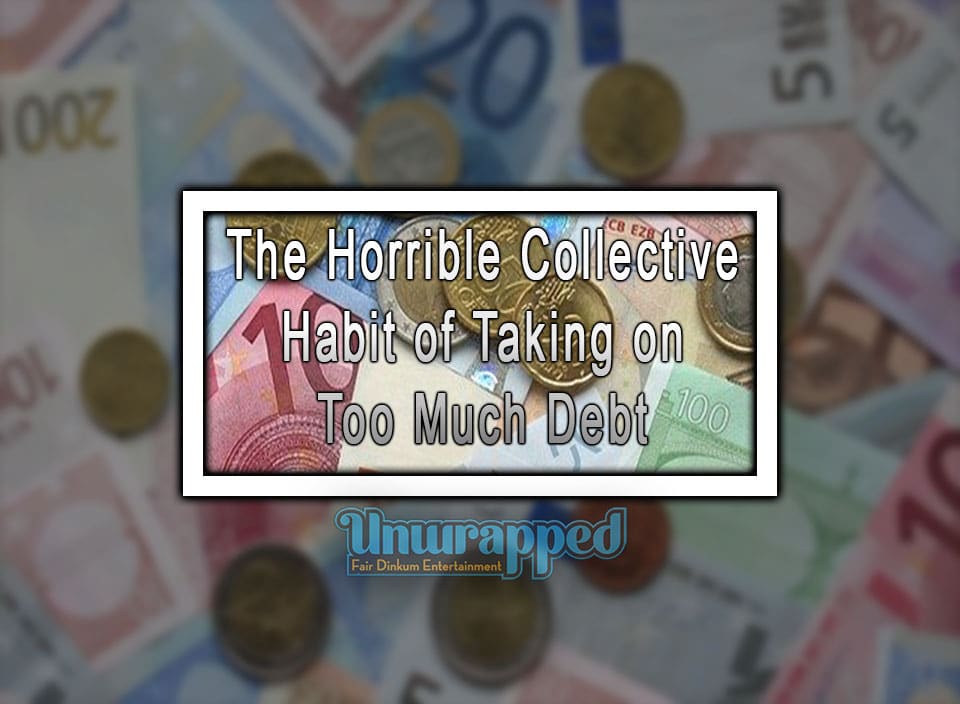 A lot of people assume that “money is what makes the world go round.” This is only half of the truth.

It’s the debt that makes the world go round. If our societies today weren’t debt-based, we wouldn’t have the 21st century. We would have people racing to borrow and invest in new creative projects.

Really, debt is good for society… up to a point…

When Debt Crosses the Line.

Debt is necessary to develop infrastructure and drive humanity forward. But is it worth it wasting our time and energy acquiring debts for our personal lifestyles?

You see, debts that go into businesses go have their burdens shouldered by a large group of people. Owners, shareholders, employees, and managers are all responsible to keep a company afloat.

With debt incurred for your lifestyle, only you carry the burden. You’ve got excess bills to pay, and a lot of expenses to keep up with. It turns into a brutal cycle, where you have to borrow more simply to manage your lifestyle.

Think about your needs as a human being for a second. Really, to live in comfort, all you need are a nice shelter, food and water, clean clothes, utility bills, and money to clean up. That’s pretty much it.

A lot of the debt comes from items that we buy to impress others. Think of the most expensive items you own that required a lot of debt for purchase. That would be your car, accommodation, and money you borrowed for a “top-notch college.”

You have useless items too that you bought with debt! Think of that credit card you use for online purchases. More often than not, you’re paying double-digit interest rates for items you don’t even need!

Of course, the expensive and mundane items all stack in costs, driving you into debt issues.

With the mundane items you buy, you’re also not tracking the costs of purchase. The double-digit interest rates of your credit can stack to hundreds of dollars a month. You stand to lose thousands a year in interest rates if you’re reckless.

All 1st world countries are affected by personal debt issues. Let’s take the US as an example, where the average household has close to $130,000 in debt (1)!

That’s almost enough to buy a house in many states…

We then have a country like Australia, on the other side of the Pacific from the US. Australia ranked 1st in March 2016 for household debt to GDP ratio (2).

That same source that talks about Australia also mentions Canada and European countries. Canada ranks 5th on the list, with Switzerland, Denmark, and the Netherlands in the top 5.

As you can see, the debt problem is truly disastrous in 1st world countries.

The Problem is Made Worse When You Surround Yourself with Indebted People.

As we mentioned in the title, this is a collective habit. It’s not something you’re only doing. Your neighbors may be guilty of such financial recklessness too.

But when we speak of “surround yourself,” we mean friends, family and coworkers. We talk about people in your circle who will judge you if you choose to drop out of the debt lifestyle.

And of course, you’ll be judged! Living the lifestyle of a black sheep is a punch in the gut for the rest of the herd.

You see, when you stop living in debt, you’re speaking the truth about that lifestyle in action. You’re saying out loud that people have spent years and fortunes for what has no meaning.

You’re not being dishonest, but it’s rare to find people who do like honesty.

Thus, fixing the debt problem means you need to reduce contact with indebted people. Individuals who are overstressed and burdened with debt are unhealthy to be around.

The Solution: Living a Life of Minimalism.

Distance yourself from people you’re trying to impress. Doing so, you’ll start to find a lot of your expensive items as useless.

You may be a single guy living in a house with a mortgage. Why not sell that, pay the mortgage off, and move to an apartment?

As for the credit card problem, you really don’t need a credit card. You should make a habit to either pay in debit, or to pay everything in cash. That way, you’ll only buy mundane items you can afford within your budget.

Speaking of budgets, that’ll be a new habit you will acquire when you stop the debt-lifestyle. The greater your degree of minimalism, the less you’ll need a budget. Some individuals naturally love a low maintenance lifestyle.

We’d highly encourage you to be one of those people.

To be honest, minimalism is more beneficial for family, even if you have kids. The high debt lifestyle is stressful anyway, straining your relationship with your family.

You also have a spoiling problem. You’re getting your kids used to a lifestyle that you can’t naturally afford. After your kids join the workforce, they’ll follow the same habit of taking up debt as a result!

They’ll need that debt to sustain the unsupportable lifestyle you provided to them. Longing for the old spendthrift days will be their fate…

You don’t want that for them, do you?

Thus, you get an infectious and vicious cycle of debt that never ends in a family. It’s really something you don’t want to be responsible for in the long-run.

Also See : The Economics of Quantitative Easing How It Works

10 Fool-Proof Ways To Save Money