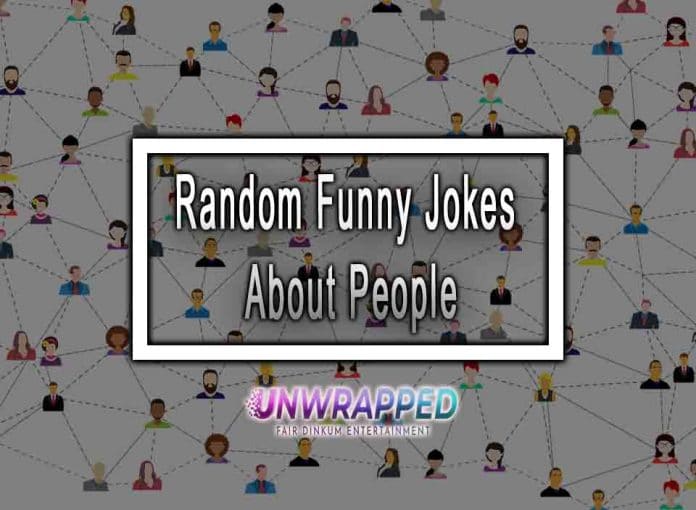 Ready for a laugh? I have collected from around the internet some of the funniest random jokes on People. See below 10 side spitting (or not) jokes on people.

“I was once abducted by aliens. They made me wipe my face, blow my nose and eat my greens.
I think I was on board the mothership.”

“Do you know that because your tongue shares muscles with your intercostal muscles it’s impossible to stick your tongue out and breath heavily at the same time?
Good boy.”

“Wish my friends were more like ‘Google‘.
It never judges me, no matter what I ask it to do.”

“I hate private jokes, they really exclude everyone
Like when Jamie stole that sofa off a pick-up truck”

“In a recent drive towards “”customer service”” the National Health Service now wants to call people ‘clients’ and patients ‘customers.’
As usual, they’ve missed a golden opportunity – to rename the salad-dodging jumbos at the obesity clinic ‘consumers.'”

“There are only two types of honest people in this world.
Small children and drunk people.”

My ex girlfriend asked me if I was any good at hiding. That was the last time she ever saw me again.

“I saw this bloke heading south on the M1 thumbing a lift.
So I pulled over and said ‘alright mate, where you heading?.’
London he said.
I said ‘well carry on down this road you can’t miss it, and drove off.”

“If there’s one thing I hate.
It’s people who moan about other people.”

When I’m bored I like to go into a crowded elevator and say ‘You all are probably wondering why I gathered you here’ with the straightest face.