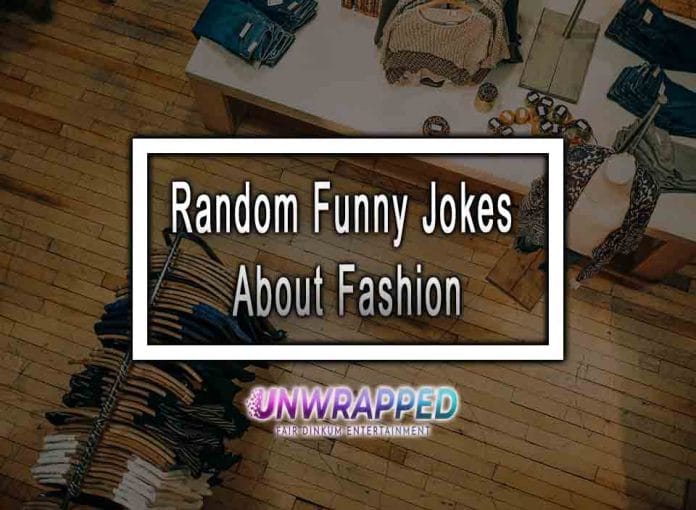 Ready for a laugh? I have collected from around the internet some of the funniest random jokes on Fashion. See below 10 side spitting (or not) jokes on fashion

“I bought a new necklace earlier that made my skin go a funny blue color so I suspected it was a rip off.
Turns out it was a 24ct gold bracelet.”

“Standing in line behind an American woman at McDonald’s. She’s wearing those jeans, you know the ones with the patch on the back pocket that says “” Guess””.
I’m thinking 450, maybe 500 pounds.”

“I asked the missus this morning what size she is, as I was buying her Christmas presents
She told me she was a size 10.
The trouble I had getting shoes in her size!”

“I recently went to a funeral in Liverpool, people were outraged when I turned up in my best tracksuit…
They’d all came in casual ones.”

“I went to the police station in a top hat, bow tie and flippers.
They said I should ‘make a statement’.”

“Why do women feel the need to wear expensive designer clothes in the hope of impressing men?
No straight guy in the history of the world has ever turned to his mates and said, ‘check out the Gucci on that girl’.”

“My parents were dog stylists before they started traveling the world preaching the word of God.
As a child, it was always difficult explaining to people that my folks were into doggie style BEFORE the missionary position.”

“Skinny Jeans.
For guys who took “”I got in her pants”” the wrong way.”

“I was never the same man again after my best friend died.
He left me all of his fancy-dress costumes in his will.”

“Apparently it’s good to be seen in expensive clothes.
But when I went out, everyone just laughed at the price tag dangling from my collar.”