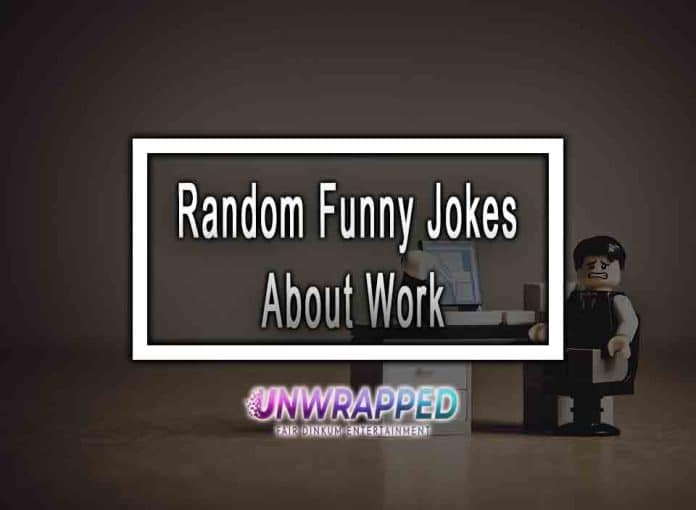 Ready for a laugh? I have collected from around the internet some of the funniest random jokes on Work. See below 10 side spitting (or not) jokes on work.

“My boss asked me, “”do you believe in life after death and the supernatural?””
“”Yes, I think so,”” I replied.
“”I thought you would,”” he said. “”Yesterday after you left to go to your grandmother’s funeral, she phoned up to talk to you…”””

“Our computers went down at work today, so we had to do everything manually.
It took me twenty minutes to shuffle the cards for Solitaire.”

“I quit my job last week at the helium factory.
I just didn’t like being spoken to in that tone of voice.”

“A guy phones up his Boss, but gets the boss’s wife instead.
“”I’m afraid he died last week,”” she explains.
The next day the man calls again and asks for the boss.
“”I told you,”” the wife replies, “”he died last week.””
The next day he calls again and once more asks to speak to his boss.
By this time the wife is getting upset and shouts, “”I’VE ALREADY TOLD YOU TWICE, MY HUSBAND, YOUR BOSS, DIED LAST WEEK! WHY DO YOU KEEP CALLING?””
“”Coz,”” he replied laughing, “”I just love hearing it…”””

“My boss texted me, “”Send me one of your funny jokes Pete.””
I replied, “”I’m working at the moment, I will send you one later.””
He replied, “”That was fantastic, send me another one.”””

“I saw a billboard on the way to work this morning that read “”Future Events.””
Well, that’s a sign of things to come.”

“I got fired at work today.
My boss said my communication skills were awful.
I didn’t know what to say to that.”

“A very attractive young woman came up to me today and asked me to get her a drink.
Then I remembered.
I was serving behind the bar.”