Skip to content
You are here:Home / Overseas UK Travel Costs – To Increase Outside Of The EU? 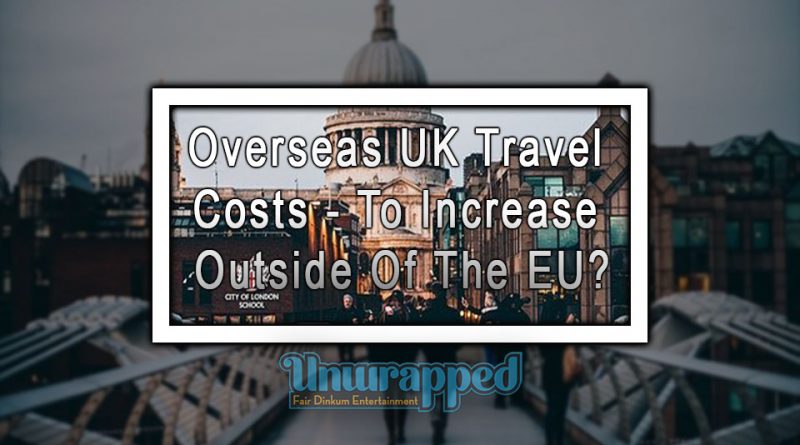 Overseas UK travel costs – Holidays are the best time for Londoners. When summer reaches, thousands jet to the warmer areas of Europe.

But will the Brexit results affect travel inside Europe? Will it become more expensive to travel? Will visas be a necessity? Will the charges for roaming shoot up?

Join us as we talk through the reality of the matter as they are.

For the short term, the fall in the Sterling price has the implication that everything will cost higher when going overseas.

But looking at it on a long term basis, the future looks brighter

The €:£ is important considering that we spend most of our holidays in the single-currency zone.

If you have already made full payment for your holiday, chances are minimal that you will be requested to make additional payments for you to travel inside Europe. That is what we refer to as the surcharge.

There is a possibility that your travel company has hedged its currency needs.

But for those who have not yet handled their trip, met accommodation fee or rented a car, the charges in Sterling may rise.

What About The Cheap Flights? – Overseas UK Travel Costs

Within the European Union, there was the freedom of flight. Some fliers such as Ryanair and EasyJet flourished under such terms. Well known carriers like Air France, BA and Lufthansa had to cut down on fare so as to keep up with the competition. The current flight charges have gone down by around of what was charged in the 1990s. If you are good at timing, you have a good fortune of saving more.

In case the UK manages to make the same negotiation with Norway, then the changes that will occur are bound to be minimal. Norwegian is a non-EU budget airline. It flies in Europe as well as between UK and the United States. Joining the European Economic Area would be a good option for Britain. This of course would need a renegotiation on the freedom of movement.

However, if Britain fails to do so, renegotiation for flying within any route will be needed.

Bearing in mind that London is centralized as an aviation hub, flight charges to key destinations in the world will likely remain unchanged.

Brexit And The Passenger Rights

The European Union has a policy in which airline passengers are compensated in case of a disruption.

The automatic right will not govern the United Kingdom airlines. There is a possibility that a new government will have to put in place new passenger rights.

Brexit And The Mobile Charges

The European Union members have always enjoyed the benefit of reduced roaming charges.

The maximum charges by phone firms on calls, texts or data while abroad have gone down. These will disappear completely by June 2017. That will happen whether the Leave or Stay Camp carries the day.

It is unimaginable that any EU country will ask the UK citizens to pay more on mobile phone charges now that they are out.

Yes, even the Leave campaigners have already hinted that one UK citizens will have to queue at the Spanish Embassy for them to be allowed to visit Benidorm.

What Happens to Border Controls After Brexit?

It is unlikely that there will be border control between the Republic and Northern Ireland. This is per the 1992 Common Travel Area agreement. However UK will regain a total control of those coming to the UK from mainland Europe.