Top 10 Marsupials to See in Australia 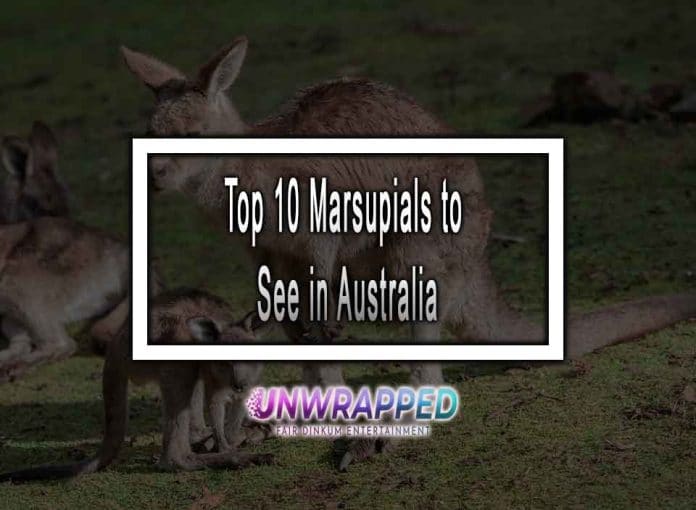 Down Under The Kingdom of Marsupials

Australia is famed for its natural wonders, scenic beaches, wide-open spaces, deserts, the bush and the Outback. But above all, the country is known for the diversity of flora and fauna and it won’t be an overstatement to call Australia the “Land of Marsupials”. Home to woolly kangaroos, fluffy koalas and cheery quokkas, the country is teeming with “immigrant” marsupials. Yes, the marsupials were around for more than 70 million years in the Americas before they made their way to Australia. So, let’s explore some cute furry little fellas hoping in the land Down Under.

The country’s national symbol and one of the most adorable marsupials, kangaroos can be easily spotted throughout Australia and on the island of Tasmania as their population is shooting past the 50 million mark exceeding humans by two to one ratio. They prefer moderate to hot climates and rarely will you find them in cold regions. Different species of these hopping marsupials are found in Australia vis-à-vis Red Kangaroo, Western and Eastern Grey Kangaroo and Antilopine Kangaroo. If you see a kangaroo in water, don’t be surprised as they are excellent swimmers who tread water in a ‘dog-paddling’ manner at a reasonable speed.

Meet the world’s happiest animal, the quokka! Resembling what we get after a cross between kangaroo and rat, these smallest wallabies can be traced on the mainland in Western Australia. But, their number on the mainland has fallen considerably during the 20th century restricting them to Two Peoples Bay Nature Reserve, Mount Manypeaks, Stirling Range and Torndirrup National Park. Nevertheless, you can meet these cat-sized marsupials on Rottnest Island where a population of 10,000 quokkas live in peace away from their predators. Hyperactive at night time, these nocturnal marsupials can survive without food or water for long periods. Snap a selfie with the friendly quokka and you will be amazed at their geniality.

Now, who doesn’t like the little adorable cuddly creature with furry ears, a big button nose and puppy eyes? Koalas are found along the southern and eastern coasts of Australia. You can find these tree-dwelling marsupials anywhere where there is a gum tree for them to laze around. They can doze off for 20 hours in a day! Interesting….Isn’t it? But you will be dismayed to know that koalas in Australia are dying out mainly due to the chlamydia outbreak. Actions are being taken and some promising measures to remediate the disease are underway. There is hope to save this cuddlesome and lovable animal. For one thing, you would like to visit Australia again and again to see these dwindling marsupials.

Is it kangaroo or wallaby? Confusing……isn’t it? These hopping marsupials have much resemblance to the kangaroo but let’s draw a line between the two. Wallabies are small to medium height, furrier and more agile marsupials than kangaroos that prefer travelling long distances on open terrains, thanks to their tall stature. Wallabies can be found all across Australia’s mainland and on nearby islands. They are popular tourist attractions having featured in Aboriginal creation stories such as the Wallaby dreaming story of central Australia. Their name is derived from the Eora Aboriginal people of coastal New South Wales. In Australia, you will come across many species of wallabies such as shrub wallabies, brush wallabies, swamp wallabies, and rock wallabies, which are named according to the place they reside.

This small, fluffy possum with big brown eyes can be found on the mainland towards the north and eastern coast of Australia including the Northern Territory, northern Western Australia, New South Wales, Queensland, Tasmania, Victoria and south-eastern South Australia. The animal has a membrane rising from its fifth finger to its ankles hence connecting its forelegs and hind legs which allows the animal to glide through the air smoothly. You will be amazed by the intricacy with which these nocturnal marsupials entwine tree leaves to form their nests in tree hollows. A clan of up to 7 sugar gliders sleeps in the nest during the day. Interestingly, you can breed sugar gliders domestically as pets.

These pudgy four-legged furry marsupials are chubby adorable creatures with grey or brown fur. You will find them waddling around south-eastern Australia woodlands and can easily trace their habitat because of their characteristic cube-shaped poo which scatters around their habitation like tiny brown dice. There is a likelihood that you may not find them in the wild as they are quite shy but they have surpassed other marsupials in intelligence as they are the smartest marsupials. Much like their cousin koala, the wombat’s pouch faces the legs to keep dirt out when the animal tills. These burrowing marsupials have three species: common wombat and two hairy-nosed wombats. To see fluffy wombats you will have to visit Australia as they are found nowhere else.

Bilbies, known as rabbit-bandicoots due to their long rabbit-like ears, live in long burrows. If you happen to land in Australia during Easter, you will find chocolate Bilbies instead of “Easter bunnies”. Aussies have, to a larger extent, replaced rabbits with bilbies as Australian Easter icons in their attempt to raise money for the research and rehabilitation of this endangered species as British colonization of Australian land wiped away one of the Bilby’s species, however, the other one survived. If you go to Spinifex Grasslands in the Tanami Desert, Western Australian Mulga shrublands, Great Sandy and Gibson desert, Mitchell grasslands of south-west Queensland or the Pilbara regions of Western Australia, you will find these desert-dwelling marsupials.

Dryandra and Peru woodlands in the south-western part of Western Australia are home to this reddish-brown creature better known as the Australian ant-eater. The animal is considered an endangered species. Formerly, it was prevalent across Australia, but today only two of its species remain. This small termite eater forages during the day for termites in the woodlands of Australia and it can eat more than 20,000 termites in just one day. You will find its habits slightly different from those of other marsupials as it is strictly diurnal and prefers to stay alone. This marsupial is the official animal insignia of a Western Australian state.

Australia is home to about 20 species of bandicoots. They look more like rats but have a pointy snout and have large hind feet just like kangaroos. These small to medium-sized nocturnal solitary marsupials with grey, black, brown or golden fur are native to Australia, New Guinea, and nearby islands. They have got their name from the word “panda-kokku” in an Indian language meaning “pig-rat”. You will find small conical holes at the place where bandicoot has come across because as these diurnal marsupials march for underground insects, they leave behind snout pokes!

Are you intrigued to see savage marsupials in Australia? Then head straight to the small island of Tasmania off the southern coast of Australia. Roughly the size of a small dog, the Tasmanian devil is the world’s largest carnivorous marsupial dwelling in the woodlands throughout Australia. It prefers feeding on dead animals but it can easily hunt down a small kangaroo. Its outrageous screams, peculiar growls, jet black fur, bad temper and aggressive behaviour are what have earned this marsupial its ferocious name.

From kangaroo’s etched teeny tiny coins to animals inspired nicknames of sporting teams, Aussies’ love for their native animals is bottomless. Traverse the kingdom of marsupials to find this downy wildlife of the land.

What is Australia's best known marsupial?

One of Australia’s best-known marsupials, the koala is an arboreal (tree-dwelling) species that feeds on the leaves of some 120 species of eucalyptus.

What Would You Do If the Internet Disappeared? (Top 10 Things That Would Change Forever)