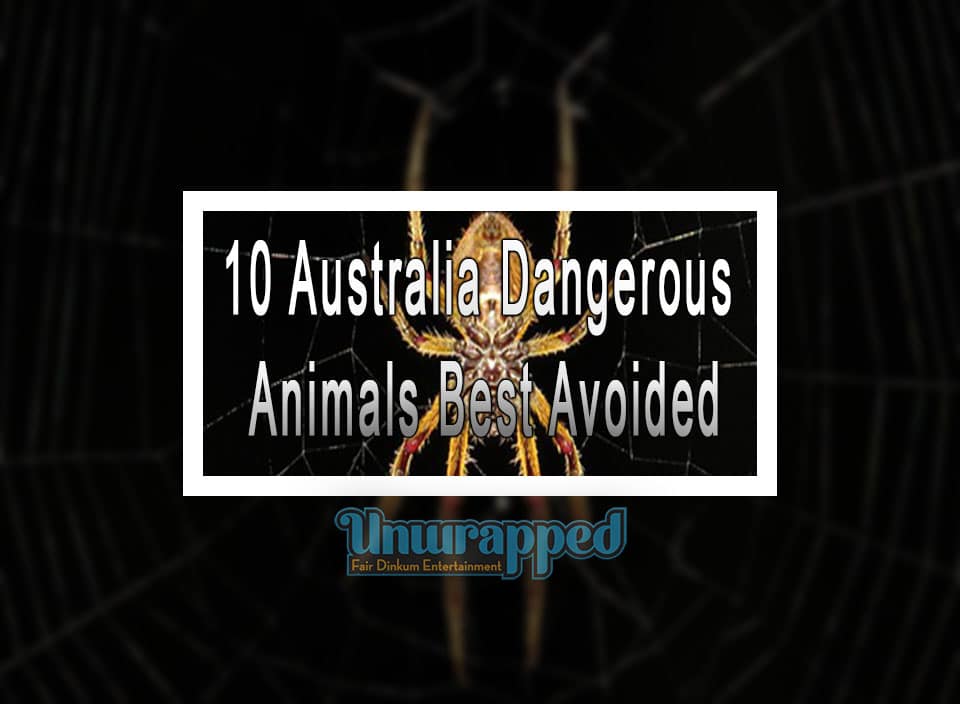 10 Dangerous Animals in Australia That You Must Avoid

To the outside world, Australia is the home to some of the deadliest creatures on the planet. Although it is an amazing country to visit and explore, however, it can also be fatal in some cases. Not only the tourists but even the lawnmowers need to be very attentive and careful in Australia.

Yes the number one should be other Humans, I agree, but for the sake of this article, we will focus on no human variety of animals.

This article contains the essential guidelines and relevant information to help you stay away from such deadly animals.

Similarly, the Redback spider is also a toxic species and you need to stay away from it.

Australia is home to various snake species as well. If you visit the country, you will find various warning signs in the parks and bushy trails. One of the most poisonous species of snakes is known as The Inland Taipan. This snake is mostly found in the eastern parts of Australia especially the deserts.

These snakes are the most common reason for snake deaths in this country.

Box jellyfish is another deadly species which lives in Australia. You will find them near the coast mostly. Their favourite spots are warm waters and they stay comfortable in them. Therefore, the ideal spots of box jellyfish are Northern and Western territory.

Box jellyfish can be so dangerous that they can put you in a state of shock and paralysis. Due to its attack, you cannot swim and can most probably drown. Thus, you need to be extra cautious while swimming and walking on the coast.

Some are even up to 6-meters. When you visit such spots, you will find many waning signs so you need to be careful. Moreover, crocodile attacks are very common and there is no way out once you get caught.

If you are thinking that soft and innocent-looking koala is another version of the teddy bear, then you are wrong. These animals can be very deadly and vicious. Koalas are carnivorous and they have pointed teeth by nature. Their attack isn’t any less deadly from that of tiger and lions.

Koalas can be as large as a dog and they are mostly found in the rainforest regions of the country. The koala stays hidden on tree-tops and finds a chance to attack whenever someone passes by. There are many reports of injuries and even deaths due to koala attacks.

ABOVE THIS (Drop Bear) is a Folk Law

As long as you are inside the cage during the cage-dives, shark seems like all fun and game. However, Australia has got the deadliest white sharks which are responsible for numerous numbers of death each year. One of the riskier sharks having a quite bad reputation is known as “Bull Shark”. They are responsible for many deaths for the past several years.

The most common shark spots in Australia are south and east Australia. In mid-east Australia, there are tiger sharks which are also deadly and always ready to attack. Thus, you need to be careful while swimming and scuba diving.

Although islands seem like the perfect place to spend your vacations, at the same time, you need to be very careful. There is a great deal of danger which you can encounter in Islands. One such dangerous species is known as Blue Ringed Octopus. One single bite of a blue-ringed octopus can be so deadly that it can lead to paralysis, muscle stiffening and inability to swallow.

Moreover, there isn’t any medication which works on its bite. Thus, you need to keep a keen eye on these shiny and glittery blue-ringed octopuses.

Coastal Taipan is a snake species. Although it isn’t an aggressive species it knows very well how to defend itself. Moreover, the poison of coastal taipan is worked only on mammals. It works in a matter of seconds and targets the nervous system. Once bitten by this snake, you will experience severe internal bleeding which can cause death immediately.

There are also some highly poisonous species of fish present in Australia One such species is known as stonefish. Stonefish doesn’t look a fish at all. It resembles a rock. So, they are pretty good at camouflaging that it is even hard to spot them in aquariums. This fish consists of spike-like spines on their bodies. Once you step on it, you will get a high dose of the powerful neurotoxin which can cause strokes of pain.

Moreover, the attack of stonefish is so deadly that the affected part of the body can be amputated as well.

Australia is also home to various bird species. These birds can kill you. The most common and deadly species of bird in Cassowary. This bird is of the size of a grown-up adult. Just like an ostrich, this bird cannot fly but they have extremely strong legs.

The main weapon of this man-sized bird is its middle toe. The toe is of the size of a 12 cm long dagger. Moreover, it runs with a speed of over 40 kilometres per hour. There are many incidents where people got attacked by Cassowary and received severe injuries. However, there aren’t any report of deaths.

Also See : Get a Pet Tortoise, You’ll love the Experience!

Stay Connected
52,667FansLike
5,669FollowersFollow
829FollowersFollow
Previous article10 Great Things to do in Darwin 2023
Next articleUnique Australian Foods to Try Before You Die