The Truth about BTS: How Much Money the Boy band has Made so Far 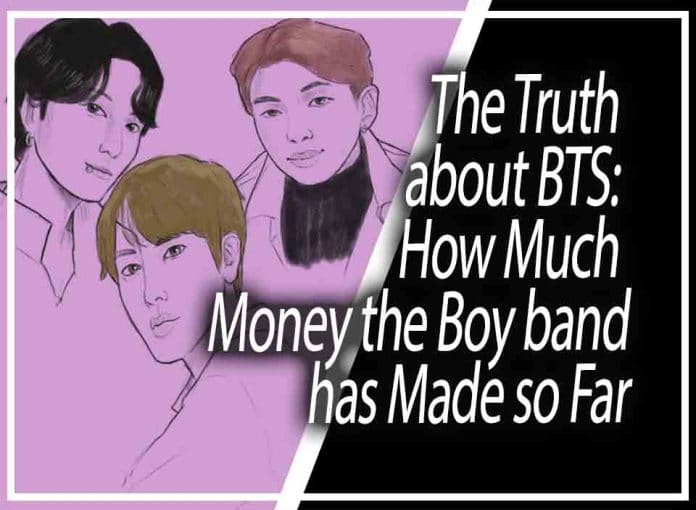 BTS’s Net Worth Is Completely Off This Planet

BTS has quickly risen to prominence as one of the world’s most popular boy bands. In just a few years, they have gone from being just another South Korean band to a popular boy band across the globe. BTS has had a long and successful career, and many people are curious to know how much money they’ve made.

When BTS first started, they were predominantly a hip-hop group. However, the band has grown through time to feature a variety of different musical styles within its setlist or genres. Several of BTS’s songs have been co-written or co-produced by the group.

According to Business Insider, the BTS singers have a tremendous amount of money. Even though they all live under the same roof, a few guys have their separate residences. According to rumors, Jin spent $1.7 million on his condo in cash. At least J-Hope and Jungkook spent $1.74 million each, while Suga reportedly shelled out $3.2 million for three separate residences of his own.

Most BTS member V’s earnings get derived from BTS’s chart-topping music releases. BTS’s V gets credited on a few tracks as co-producer and co-writer. Hwarang: The Poet Warrior Youth, a historical drama based on a Korean folk tale, has given him a starring part as a supporting actor. He has a net worth of $20 million at this time.

On several BTS tracks, Jungkook is also a producer. Songs like Magic Shop and Love is Not Over were co-written with him. Flower Crew and Celebrity Bromance are two of the many South Korean television shows in which Jungkook has participated. He has a net worth in the neighborhood of $20 million.

On top of that, Suga possesses a net worth of somewhere in the vicinity of $20 million. Additionally, Suga has written songs for the likes of Lee So-ra and Suran in addition to BTS. As a songwriter and producer, his name appears in moreover seventy songs.

Most of BTS’s income comes from their work as songwriters, producers, and performers in the music industry. Celebrity Net Worth estimates that BTS made $170 million in 2019 from their tours, which isn’t surprising given that the Love Yourself World Tour was bought out almost immediately after it got launched in 2018.

From June 2020 to June 2021, the musicians of BTS received a total of $50 million, or about $8 million for each singer. As just a secondary point, every one of the 7 BTS musicians has his net worth. For instance, the three rappers (Suga, J-Hope, and RM) have put in the most effort in the composition of their respective songs.

There’s little question that the bank balances of Suga, J-Hope, and RM are distinct from those of the other members because they’ve all recorded their solo albums. BTS’ Jin, the group’s senior member, established a restaurant alongside his brother in South Korea in 2018. V, a member of the group, is also an actor. A prominent Korean television show starred him in 2016.

They Have Tons of Endorsement Deals

In addition to being adored by followers, BTS also gets admired by companies. The Boy Band has indeed been brand advocates or brand ambassadors for Seoul Tourism, Coway, Formula E, Puma, FILA, Louis Vuitton, and Samsonite, among many other companies. According to The Korea Times, for each Korean brand BTS endorses, the group can receive up to $4.5 million, and that sum jumps even higher when BTS approves a global brand. For McDonald’s BTS Meal promotion, they made almost $8.5 million due to this. As for the reported $5 billion in annual economic contributions, they’ve earned it.

In addition, we would be negligent if we didn’t note their numerous brand partnerships. Besides their personal absorbs BT21 Line Friends collection, BTS has collaborated with several other companies, including Sketchers, VT Cosmetics, Mattel and CASETiFY, Jamie Wander, Baskin Robbins, and Tamagotchi.

BTS and Their Earning Through Movies

Back in 2018, BTS produced eight-episode YouTube Premium movies on their Wings Tour, which came from a video from the backstage of the concert. Burn the Stage: The Movie, a film adaptation of their documentary, was released in theatres shortly after, grossing an estimated $14 million throughout its first weekend alone.

In 2019, Bring the Soul: The Movie followed, bringing in millions and breaking box offices records once more, and in 2020, Break the Silence: The Movie will be the next in line. All in all, BTS tour photos and film distribution equal cash.

Unexpectedly, many people can find one of the most important revenue streams for BTS here. The members of BTS’s label, Big Hit Entertainment, were individually issued shares about a month before the company became public and announced its South Korean stock exchange debut in October 2020.

Lastly, in 2021, The Wealth Record estimated that BTS got valued at $100 million, which shows that BTS has grown massively in the past few years, both financially and in terms of fan following. On the other hand, BTS makes it an obligation to donate, which makes us even more utterly obsessed with the group. Many activists and African-Americans will long remember BTS’s June 2020 $1 million donations to the Black Lives Matter movement.

Stay Connected
41,936FansLike
5,684FollowersFollow
820FollowersFollow
Previous article
25 Facts About BTS That Will Make You A True Fan
Next article
A Comprehensive Guide To The K-Pop Boy Band BTS

15 Things You Did Not Know About the BTS Boy Band...