BTS: A Step-By-Step Breakdown of the South Korean Boy Band’s Net Worth 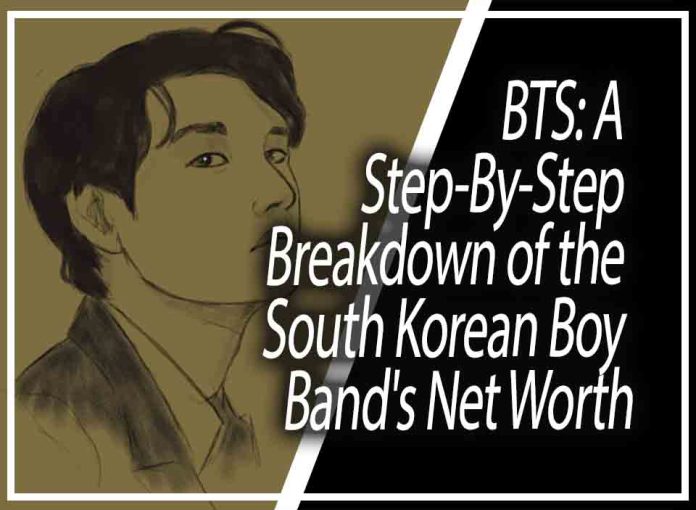 After their debut in 2013, Bangtan Sonyeondan, or BTS, is now one popular South Korean boy band performing worldwide today. BTS is well-known for its versatile and unique talents, starting from singing, rapping, and dancing. They reached various achievements quickly, like being a Grammy nominee and Guinness World Records holder.

Do you ever wonder how much BTS make from all the hit songs and endorsements they have from all the years of performing? Here’s a quick breakdown of the famous South Korean Boy Band’s net worth.

Today, they are known to be the 47th highest-paid celebrities in the world and the highest among K-pop groups. EXO follows them with approximately $1 Billion (with D.O. as the wealthiest member) and BigBang, known as the “Kings of K-pop,” with more than $100 million and GD as the richest. BTS has also remained on top, leaving Blackpink, one of the most influential celebrities in South Korea, in the lower rankings.

The boy band’s combined net worth accumulates an average of $3.6 Billion as of 2021. BTS members contribute a net worth of $24 million each, except J-Hope, with a net worth of $36 million from his solo mixtape, ‘Hope World,’ which topped the global charts.

Besides their earnings from their group, each BTS member also has different solo projects like J-Hope. Rap Monster, or known as RM, who is the band leader, focuses his talent more on writing songs. Records show that RM has more than 130 credited songs, including a single for the Korean soundtrack for the Fantastic Four.

On the other hand, Suga works on composing songs for other artists like Lee So-ra and Suran. Their portfolio shows that he had about 70 credited songs. Suga also has a mixtape, D-2, which hit the number one spot on the iTunes charts in 2020.

Aside from music, the members also branch out to acting and TV show appearances. At the same time, V Taehyung also tried his talent for acting, leading him to a supporting role in the hit historical drama, Hwarang: The Poet Warrior Youth. He did this besides sharing producer and writer rights to their songs. Like other members, Jungkook also has production and writing privileges. He has also taken part in some South Korean TV shows, including Celebrity Bromance and Flower Crew.

As for Jimin, the group’s formally trained dancer mainly makes off from his BTS projects but has also made appearances on TV shows like Hello Counselor. Compared to solo projects given to other K-pop groups, BTS have lesser but is still highly regarded as the top and most affluent group today regarding their successful label and musical influence. They have gotten credited for the music industry’s growth and music sales in the world.

Aside from their joint musical efforts, including singing, songwriting and record producing, another addition to their massive net worth is their global tours. Since 2014, the group has already taken on five tours: The Red Bullet Tour; Wake Up: Open Your Eyes Japan Tour; The Most Beautiful Moment in Life; The Wings Tour; and Love Yourself World Tour (2018-2019). Online reports show that the group grossed $170 million until the last tour, surpassing known American bands.

Even on Youtube, BTS still reigns its popularity setting off world records like Most Viewers for a Youtube Premiere, Most Viewed Video on Youtube in 24 hours, and Most streamed Group on Spotify. The group’s channel has approximately 61 million subscribers with 109.3 billion views.

Experts reported that BTS had earned an average of $16.5 million alone from their YouTube channel, followed by Blackpink with $11.6 million and NCT Dream with $1.81 million.

The South Korean boy band also signed endorsement deals with popular brands like Puma, LG Electronics, Coca-Cola Korea, and Louis Vuitton. They earned a whopping $4.5 million for every brand sponsorship. Remember the BTS meal promotion at McDonald’s that became a hit worldwide, especially in the Philippines. Mcdonald’s has sold almost 3.5 million pieces of nuggets only on its opening-launching day.

Besides the endorsements, the group also had several brand collaborations with Sketchers, CASETiFY, VT Cosmetics, and Jamie Wander, to name a few. They have also released their collectibles called BT21 Line Friends, including cute sweatshirts, backpacks, and digital clocks.

However, due to the Covid-19 pandemic, BTS’ planned summer stadium tour in the United States was halted and settled for virtual options for their Armies. It did not stop BTS from reaching their Army despite the restrictions, later creating the BTS World App. Today, Big Hit Entertainment has organized two virtual concerts, Map of the Soul ONE and Permission To Dance On Stage. These performances generated a 1.25 trillion won revenue by selling 214,000 tickets.

BTS’ massive popularity around the world paved the way for to release of other projects like movies and documentaries for the ARMY to see. A year after their Wings Tour, the group released behind-the-scenes footage in an eight-episode documentary on Youtube Premium. This presentation turned into a movie version called Burn the Stage: The Movie in theaters. It reportedly reached $14 million in ticket sales worldwide only on its opening weekend. The movies released by BTS always became box office hits for the public.

The further expansion of BTS

Due to the tremendous earnings of BTS, some statistics reported that the group brings an average of $5 billion to the South Korean economy yearly. Recently, Big Hit Entertainment also publicly opened stocks. Shares from the agency value to an average of $115 each raise to approximately $822 million, equal to a $4.1 billion company value. BTS members are said to have 68,000 shares of HYBE each, valuing $16 million, and constant earnings from their different projects and platforms. The group is now a part and a shareholder of Big Hit Entertainment.

As the BTS continues to influence the world as a global phenomenon, their net worth will increase. Furthermore, their ARMY is always ready to consume their art and merchandise, fueling BTS to fame and prestige.

A Comprehensive Guide To The K-Pop Boy Band BTS