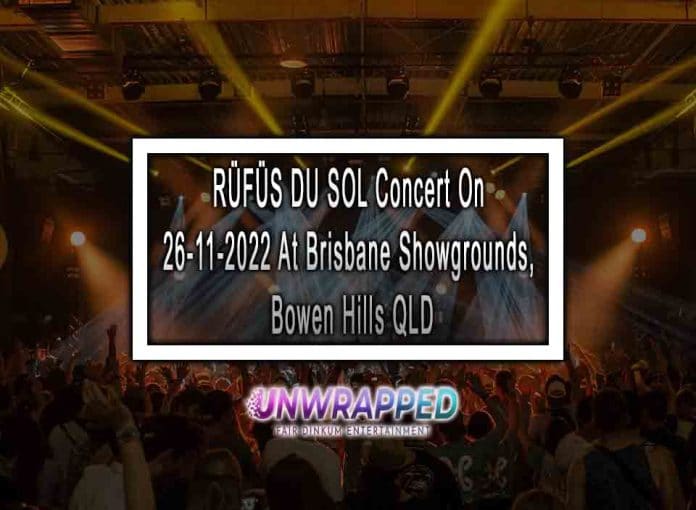 In 2022, RÜFÜS DU SOL will perform for Australian fans at outdoor locations throughout Australia with their colossal spectacle. RÜFÜS DU SOL will offer their fans a completely new live show experience with their greatest live performance production after releasing their fourth studio album, Surrender. The amazing Jon Hopkins, who will perform his live audio and visual presentation, and Australian house and techno newcomers Luke Alessi and RONA will join the group. When RÜFÜS DU SOL performs live for the first time in Australia in two years, we can’t wait to celebrate the return of live music and welcome them home!

The news comes almost three years after the release of SOLACE in 2018 and immediately following the group’s fourth album, Surrender. Surrender is dishing up club-ready tunes ready to welcome you back to the dance floor and soundtrack the rapidly approaching summer months, feeling like the ideal continuation of the iconic sound we’ve come to appreciate. Surrender “is texturally diverse, presenting genuine emotions, engaging voices, organic and cinematic soundscapes, haunting synthesizers, heavenly sounds and moments meant for sheer dance floor pleasure,” according to FORBES. They cite Surrender as a reminder of why RÜFÜS DU SOL is at the vanguard of the live-electronic sector.

Tyrone Lindqvist, Jon George, and James Hunt make up the Sydney-based Australian band Rüfüs Du Sol, which is stylized as RÜFÜS DU SOL and was initially known as just Rüfüs from 2010 until 2018. Their second album Bloom arrived at the top of the Australian albums chart in early 2016, while their first album Atlas peaked at number one in Australia. The ARIA Award for Best Dance Release was given to their song “You Were Right” in 2015. They played as Rüfüs Du Sol in the US even though they were still known as Rüfüs everywhere since Rufus was already taken. They worldwide rebranded as Rüfüs Du Sol in 2018. They have appeared at events such as the Byron Bay Bluesfest in New South Wales (NSW) in 2013.

In November 2010, Jon George, Tyrone Lindqvist, and James Hunt created the band. They released their first EP, Rüfüs, on 1 Jan 2011. Their first song, “We Left,” was made available on 25 Jul 2011. “Paris Collides” and “We Left,” two songs from the EP, concurrently peaked at Nos. 8 and 13 on the potential Hype Machine charts, while the music video for “We Left” was named one of 12 worldwide finalists for the 2012 Vimeo Awards for best music video. They released their second EP, Blue, in April 2012. On 16 Jul 2012, the “This Summer”/”Selena” double A-side single was made available