The Sisters of Mercy On 28-10-2022 At Fortitude Music Hall, Fortitude Valley QLD 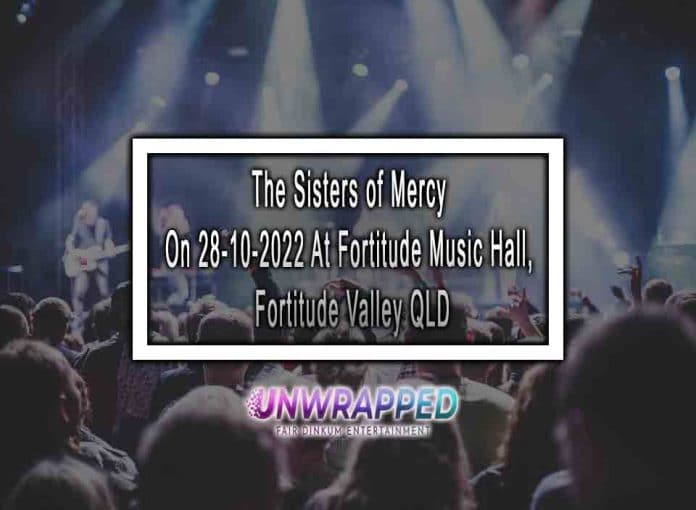 The Sisters of Mercy 2022 Tour

Event: The Sisters of Mercy

The Sisters Of Mercy, the gloomy rock icons, have announced that they will return to Australia in October, with five gigs scheduled around the country. For the first time since 2019, founding member Andrew Eldritch and his band will be performing in Australia, reminding fans why their music is still considered among the finest goth (sorry) music of the 1980s. While Sisters Of Mercy haven’t released new music in almost three decades, it doesn’t mean they will not be writing and recording new songs.

The Sisters of Mercy are a Leeds-based English rock band established in 1980. The band’s commercial success came in the mid-1980s and maintained it until the early 1990s, when they ceased producing newly recorded material in protest against their record label, WEA. Currently, the band is solely acting as a touring act. First and Last and Always (1985) and Vision Thing (1989) are the group’s three original studio albums (1990). Each album was recorded with a changing lineup; the only constants were singer-songwriter Andrew Eldritch and a drum machine named Doktor Avalanche. Eldritch and Avalanche also collaborated on The Sisterhood, a side project from Eldritch’s feud with previous members.

Early 1990s, the Sisters of Mercy went on strike against East-West Records, accusing the label of ineptitude and royalties withholding and demanding that the group release at least two more studio albums; instead, the label issued Go Figure under the alias SSV in 1997. After performing several new songs in their live performance, the Sisters of Mercy were never signed to another label or published any new material, despite being liberated from their East-West contract. Side-Line Music Magazine reported in October 2006 that the band was in discussions with Universal sublabel W14 Music. On November 3 in Europe (and October 30 in the USA), WEA International reissued three Sisters of Mercy albums: First And Last And Always (1985), Floodland (1987), and Vision Thing (1989). (1990). Each album also included an extra track culled from a companion single.