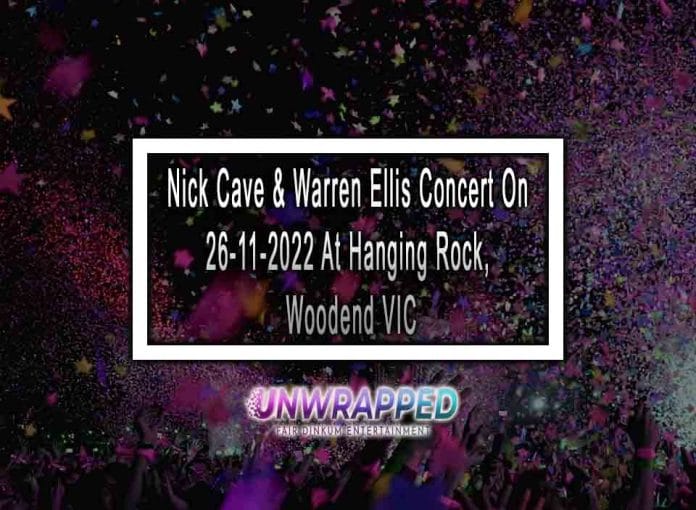 The renowned Hanging Rock in Victoria’s Macedon Ranges will host two concerts by Nick Cave and Warren Ellis on November 25 and 26. They will be the opening dates of their forthcoming Australian Carnage Tour, which will be hosted by Always Live, Frontier Touring, and Supersonic. The VIC gig announcement follows the release of Cave and Ellis’ critically acclaimed album CARNAGE in 2021, a string of special live appearances in the UK and Europe, and a current North American tour.

The pair’s next tour is the worst-kept secret in town after Cave informed fans in a recent Red Hand Files email that they will be returning to Australia in November. The publication of Carnage, a dark and stunning work demonstrating Cave and Ellis’ continued creative cooperation, astounded us last year. “This Much I Know To Be True” is a new documentary by filmmaker Andrew Dominik that examines the creation of that record and the two artists’ overall connection; it will be available to fans in May.

The two potential musicians have been working together for 30 years; throughout that time, they have produced fantastic music as members of Grinderman and Nick Cave & The Bad Seeds and written the scores for movies including The Proposition, The Road, and The Assassination Of Jesse James By The Coward Robert Ford. The lads are presently on a lengthy US tour before reigniting the Bad Seeds for performances in Europe later this year, so they should be in top shape when they return home for the first time. The duo’s recent US setlists, which have primarily included songs from that powerful band, may provide comfort to those desperate to see the Bad Seeds once again.

Australian musician and composer Warren Ellis were born on 14 Feb 1965. He is a part of the rock bands Nick Cave, Bad Seeds, and Dirty Three. Until its dissolution in 2013, he also performed with the band Grinderman. Along with longtime friend and bandmate Nick Cave, he has also written film soundtracks. Ellis performs on the viola, tenor guitar, violin, piano, accordion, bouzouki, guitar, flute, mandolin, and mandocello. Since 1994, he has been a part of Nick Cave and the Bad Seeds.