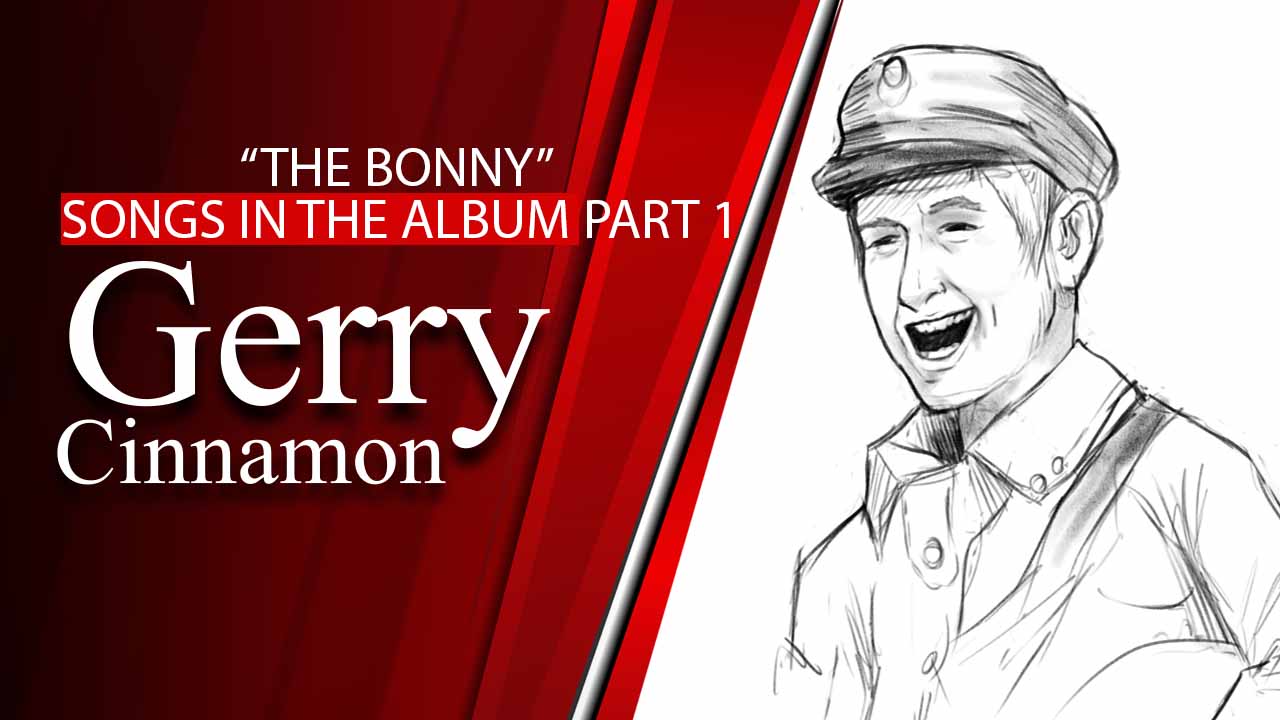 The Bonny has an evolved composition in comparison to Erratic Cinematic. The song count is 15, 6 more than Erratic Cinematic. The content of the lyrics is also more varied with songs being centered around personal dilemmas in a multitude of scenarios and with creative imagery and wordplay taking stage as well.

Canter, the first song in the album, is sure to catch a lot of attention in Gerry’s concerts with its upbeat vibe and sing-a-long ready lyrics. The album released in  April 2020.

The album begins with a song that focuses on a theme on getting the most out of oneself with a self-reproachful manner. “This is the beginning of the rest of your life” the lyrics try to bring the listener to action, coaxing one into more ‘grafting’ which is Scottish slang for working.

The chorus is an upbeat tune with the drum thumping and Gerry carrying an upbeat melody in his singing.

The song has a very active instrumental in its melody, having guitar, harmonica and drums in it. It keeps an edge with the rhythm of the drums and the lyrics talk about being reckless. It denotes both the freedom that comes with brave actions but also the dangers of it with the metaphor “One bite and you’ll never come home” referencing vampires. The feel of the song is wild and imaginative and its lyrics follow this line as well. Drums are the main instrument used.

The song has an aggressive vibe to it and it creates a story about a war and letting words fly. This feeling of conflict turns into the romantic side at the end of the song with lyrics mentioning leaving oneself open for love. The instrumentals are a sharp harmonica and a constant guitar pattern. Gerry sings in an animated song throughout and maintains a fervent emotion in the song.

The song is about feeling vulnerable and weak inside. Not wanting to deal with this emotions is worked throughout the song as ‘standing on the outside’ and wanting to stay busy to not have to deal with this problematic emotions. “I don’t care if I win” is mentioned in the lyrics to portray a feeling of self apathy and helplessness. The song is one of the darker songs by Gerry Cinnamon but also one rich in cutting lyrics. The instrumentals are a harsh guitar tune that stays constant in the song.

Disappointment and feelings of detachment in love are the main theme of this song. The detachment is presented as a metaphor in talking to a “ghost”. The song talks about “Love versus pride” which denotes a conflict in a relationship being the main subject in the problematic. In the end a split is what the result of the problem turns out being with “I never was great at saying goodbye
I’m sure you’ll find other ghosts to keep you occupied” describing the parting of ways.

One of the more frontal of Gerry Cinnamon’s song, the song is about a troubled conscience with “I threw on my shades to hide from the sun in the sky” being  lyrics that present this scenario. The man in the story seems to be far away from home when he commits these wrongful actions and coming back home with a guilty conscience signals to infidelity being a theme that is the source of the problems. The pedal beat takes in the songs faster verses and the guitar accompanies with a swift melody as well.

A thought provoking piece, this song talks about worldviews. Chemtrails in the sky are mentioned, and are a source of curiosity as well. The song has a thoughtful and whimsical tone to it and considers many scenarios of conspiracies that are popular today. The presence of advertising in the mind and original thought are also points referenced within the song.

The world being run by criminals is one of the themes mentioned and the song ends with the pensive line of “every man’s truth is another man’s waste of time”.

The instrumental are soft guitar chords and Gerry singing in a warmly melodic tone.

Stay Connected
52,679FansLike
5,667FollowersFollow
828FollowersFollow
Previous articleWhen and how much will Gerry Cinnamon UK tour tickets be available?
Next articleThe Bonny Songs in the Album Part 2