Skip to content
You are here:Home / Critical Analysis We by Yevgeny Zamyatin 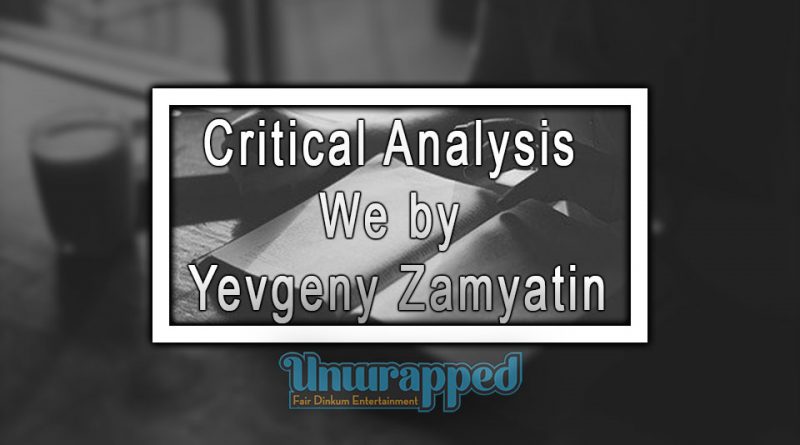 Detailed Analysis We by Yevgeny Zamyatin

We by Zamyatin is a book that has laid emphasis on a character by the name D-503 who is a mathematician. He foresees a future where he will be able to make an integral first ever rocket seen in the OneState. Although he is a superb citizen, D-503 follows all the movements of the table to the letter. He mocks the irregularities of the ancient music while on the other hand praising the rhythms of engines and the human lives that are being basically choreographed from above.

Respectfully D-503 awaits the pink tickets of his partner O-90. He is in awe of the subversive verses of the poet R-013. Generally, he lives his life according to how a citizen of OneState is expected to. However, when I-303 enters his life, D-503 is puzzled by so many questions and suddenly his life is thrown to a flux. His virtues and treatise about OneState become hijacked as I-303 mysteriously crosses his path.

And when he drags the things happening in OneState in to the equation, he becomes unusually interested in the things happening outside the Green Walls of OneState. D-503 neglects his dreams then change his way of thinking. He is more focused on the ideology that dreams and hopes while believing that happiness is brought forth by lack of freedom.

D-503 falls in love with the I-303 who is a leader of an underground movement and they escape far beyond the green wall through a tunnel. Past the green wall, life is different and in the primitive past. However, before long the rebels are all captured and D-503 becomes reconditioned then made to be an unmoved spectator when his beloved one being tortured in front of his eyes.

We by Zamyatin is a book that hovers around fiction and fantasy that is considered by most people as the tragedy of mythic. The novel focuses on a story of a mathematician known as D-503 whose main aim is building the very first integral rocket of the OneState. OneState is the glass city where the story is set and the residents here are perceived to live in Utopia.

All they do is rise, work, eat and sleep in their rhythms as they believe that life is synchronized to the minute. All the way from free time, to music, uniforms, humours and everything else the citizens of this State know. They typically live according to the mechanized movements of the clock as well as hyper formalities. Also they live under a regulated existence under a watchful eye of their benefactors.

Hence, they are given zero room for imagination or individuality in any case. More to that, the violators of the law in this state are scorned then melted away publicly as everyone watches. But beneath all this severe façade, there is a stirring movement beyond the Green Walls.

Yevgeny Zamyatin is a Russian novelist, satirist and playwright who has one of the most brilliant as well as cultured minds. He is known for the famous dystopian novel known as We. Besides that, Zamyatin has also written a couple of short stories while criticizing the communist regime of the Russian country.

Zamyatin was born in 1884 in Lebedyon and studied naval engineering at school. He died in Paris in 1937, leaving behind his legacy as a serious critic of oppressive governments.

What Makes This Book so Scary?

This book simply introduces us to a community where people are not given the chance to express any imagination or individuality in any case. Anyone who tries to violate the law in this society is scorned then melted away publicly as everyone is watching. The book simply shows us what an oppressive government in the future would look like.

Since our narrator is a mathematician with much interest for numbers as well as empirical data, this book tries to bring out the nature of the narrator through the ‘dry’ style of writing. And the fact that he has only known the self-censored world, it’s okay for him to use the unfinished and disjointed thoughts to explain his experiences.

Buy Now : We by Yevgeny Zamyatin

Dark near future world the only certainty is everything is uncertain Ralph Jones and his Upcoming Novel – Survival Diaries – The World You Think You Know..