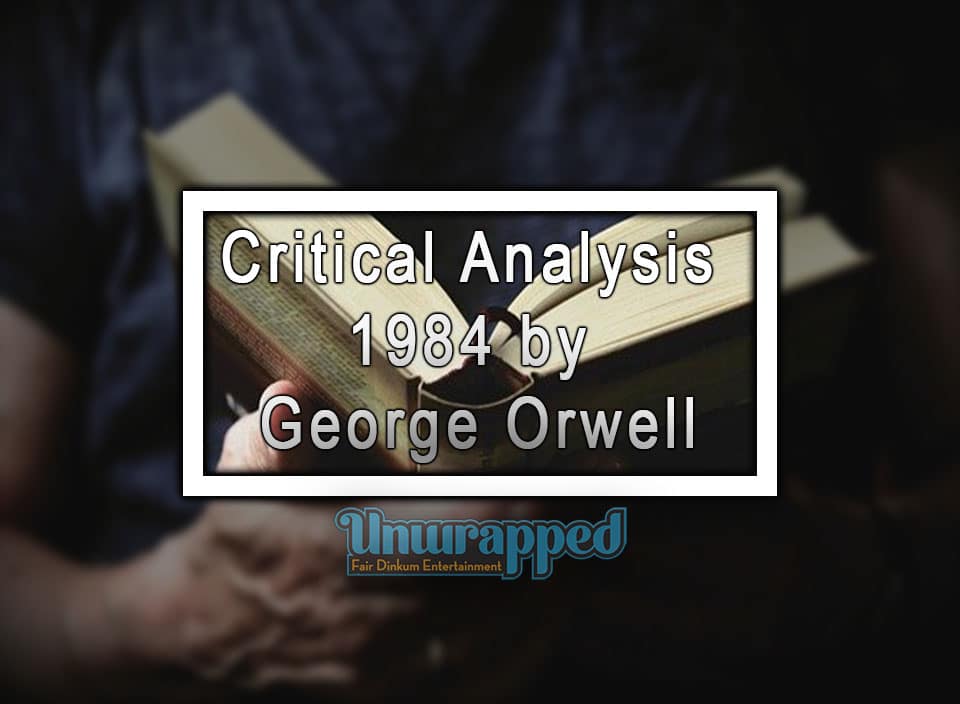 Critical Analysis 1984 by George Orwell – This novel focuses on a character known as Winston Smith who is depicted as an everyman who lives in the Oceania. Oceania is a future state which has a ruling authoritarian political party that controls simply everything. Winston happens to be a member of the lower members of the party as he has a working post in the ministry of truth.

Winston works to change the historical information in order to portray the likes of the Big Brother (who is the head leader) and the government. Since Winston is worried about the state too much, he keeps a secret diary that he writes down all his anti-governmental ideas and thoughts. Winston decides to share his thoughts with another guy known as O’Brien who is his co-worker as well as the member of the ruling party.

However, Winston feels that O’Brien could be a member of the brotherhood who are the opposition party. That aside, Winston meets Julia at the ministry of truth who is also a party member. Julia sends Winston a note notifying him that she is in love with him. Despite the fears Winston has, he still jumps in the boat and starts engaging in a passionate affair with the lady.

In that case, Winston books a room in the neighbourhood where it’s a lower class society. He hopes that they can have their little private affair with Julia here. The two sleep together and afterwards discuss about their hope for achieving freedom outside the oppressive state they are currently live in. afterwards, Winston goes and meets up with O’Brien who confirms that he is a member of the brotherhood. He shares the brotherhood’s manifesto with Winston which is scripted by their leader.

The book typically has information about the recitation of the brotherhood including some social democratic ideas. However, O’Brien does this just to test Winston’s loyalty. Winston is arrested at the bookshop by some private police then taken to the ministry of love for torture but he refuses to admit that he was wrong to disobey the government. From here Winston is taken to a room where O’Brien uses his worst fears against him.

Winston hates rats and when a box of hungry box of rats are brought up close to his face he pleads to be released. In fact, he pleads that Julia takes his place. The book at the end recounts how Winston once again becomes a valid member of the society. He becomes a broken man who has no power to resist oppression form the government. Although he meets up with Julia shortly after, he no longer cares anything about her. All he does is look up at a poster of the Big Brother is admiration and love.

Orwell’s nightmare has become so much engrained as part of our consciousness in a way no one expected. Basically, the novel 1984 is a story that shows horrors of political treatise. The book surveys the theme of socialism which is an integral part of the warnings set by George Orwell. As we can see Orwell tries to warn against some of the dangers that are likely to come up when there is a lot of authoritarianism. In this dystopian state, the author offers a very devastating view of the society where there is totally no freedom of expression.

The people are actually not allowed to say what they think. Instead, the population here is forced to believe in a single party and a single ideology without any option. In fact, this is a society where language is disregarded to an extend that it is only used to serve the government. The party has actually invented its own language known as the Newspeak that is used as a tool for completely eliminating any forms of political rebellion.

For that reason, the party controls everything ranging from what the people, think, speak and even do if they disobey they are taken up for punishment. As we can see, even the colleagues at his work place don’t actually play any roles in the society. They are only there to work for the ruling class of the government officials as they dread the looming punishment if they disobey.

In short, everyone who is not part of the ruling class is subjected to the capitalism ruling system. Here in this book, George Orwell simply combines what is known as a thriller narrative with a seriously core political message that unravels the horrors that would come up with political oppression.

About the Author – Critical Analysis 1984 by George Orwell

George Orwell was a novelist as well as a known novelist and critic. Famously known for his books Animal Farm in 1945 and 1984 in 1949. George was a man who has strong opinion all addressed towards the political movements that happened during his time. this included communism as well as fascism and imperialism.

Orwell’s book 1984 stirred up a lot of controversies after his bleak vision of a future with a world divided in to three major oppressive nations. All the reviewers of Orwell’s books found the fictional perspective of Orwell too despairing. The main idea of this book was to show the government what the world will turn to be like if they start controlling every single bit of a person’s life even their private thoughts.

What makes the book so scary? – Critical Analysis 1984 by George Orwell

Would you imagine living in a world where you don’t have the freedom of expression? Oppressive, right? Such is the world depicted in the book 1984. A future where you are actually forbidden to have any private thoughts and everyone is compelled to adhere to only one ruling party and a one ideology.

The book brings to us a government that controls even the private thoughts of its citizens and has actually a language known as the Newspeak. This is used as a tool for completely eliminating any forms of political rebellion. Any forms of opposition are punishable through looming torture.

What makes it readable? – Critical Analysis 1984 by George Orwell

In this book, the author brings to us a wide array of themes in an easy to comprehend way. This is one book that is presented in a simple, short and direct way. In that, its direct to the point and that is actually the reason why it is being studied in most schools worldwide.

Dystopian at is best with Ralph Jones and his Upcoming Novel – Survival Diaries – The World You Think You Know..

Each dictatorship possesses an all-pervading control of collective behavior and of thought itself. The past is a pawn in the hands of present policy: When the rulers want to change history, they destroy all old books and periodicals and replace them with new ones. The power elite are indifferent to truth.