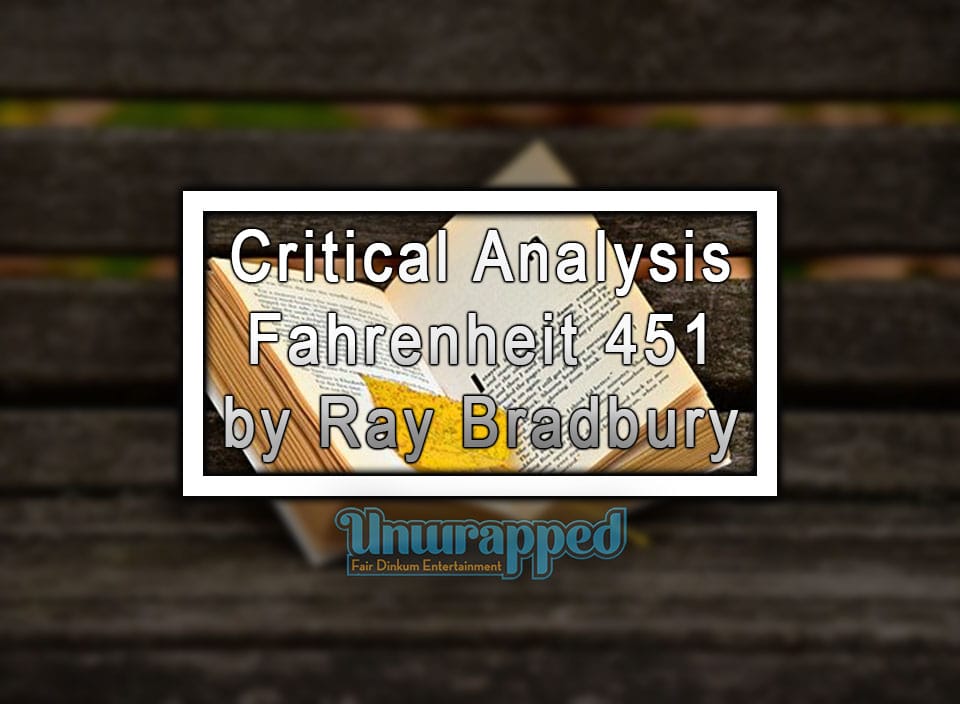 Fahrenheit 451 is a book that has its plot set across a futuristic society that finds happiness and pleasure in shallow waters. In that, people in this society achieve their pleasures from what look like wall-sized TV screens as well as small meaningless talk. In this society, it’s more of a sin to think and things like books which are depicted as the vehicles of new and different ideas are banned in this society.

And to accomplish their mission to eradicate books, these society uses diverse firearms to burn down any traces of books that are still intact. The story takes a turn where one of the fireman’s known as Guy Montag starts to wonder why their society is burning down books. This is after Montag meets a carefree lady who has the balls to ask people around and most specifically Montag if they are happy with what is happening.

Eventually, Montag develops the habit of rescuing as well as stealing books from the fires. Basically, the story tries to show us what can happen when we live in a society that is mentally stagnant. Just imagine living in a world where you are not allowed to read about the rest of the world since books are outlawed in the society no matter their themes.

The society is so set back that they don’t even realize when the rest of the world in planning a war against them. They are convinced that the war would be quick taking only a day or two. The society is a slave of entertainment and we can see this clearly from Montag’s wife Mildred who takes pleasure in watching shows on a big screen all day long. Mildred has gone to extents of calling the characters in the show her family.

Fahrenheit 451 is a book that paints a picture of a word where people no longer think for themselves. In such a world, books are seen more of receptacles of individualistic thinking. And since thinking for oneself is such a crime, books are banned in this society. As they believe that thinking for oneself would hurt someone else out there, the people in this society just end up in a hedonistic society.

In that what people now call family area the wall to wall televisions as well as the characters that are portrayed in it. A society where teenagers are seen driving cars while trying to kill pedestrians just for the sake of doing so. This is book that more importantly critiques mass establishment that tends to control the entire function of the society. A society with mass misinformation without any trial system.

People openly lose their mental faculties and all they do is wait for information to flow from their huge wall to wall televisions. and definitely the information flowing in is already manipulated by the government and therefore most people have lost their fundamental ability to ask a simple ‘why?’

Ray Bradbury is an American writer who has his works categorized in the horror and fantasy niche. He is best known for his novels Fahrenheit 451, the Martial chronicles, The Illustrated Man. His best known novel is the Fahrenheit 451 which focuses on a study of the future American Societies in a dystopian study.

What Makes This Book So Scary?

This book presents to us a world where people no longer think for themselves and books are depicted as a way of individualistic thinking. And it’s for this reason, all books are banned from society completely. Is this where our future might be headed?

A future where people are slaves of technology to an extent where they refer to characters in the TV as their own family? This books also shows us how the government could easily control a society through misinformation when they become reliant on technology and neglect reading about the rest of the world on books.

This book tries to teach the society a lesson about being enslaved to the modern technology and media. It tells us that we shouldn’t just sit there and watch as our attention smoulder all the way to ashes. At times it’s necessary to extinguish that burning flame of your smartphone and work on restoring values that comes with deep knowledge and real face to face conversations.

Ralph Jones sends a warning against technology and unchecked government in his  Upcoming Novel – Survival Diaries – The World You Think You Know..

Is Iron Mining On the Moon the Future of Humanity?