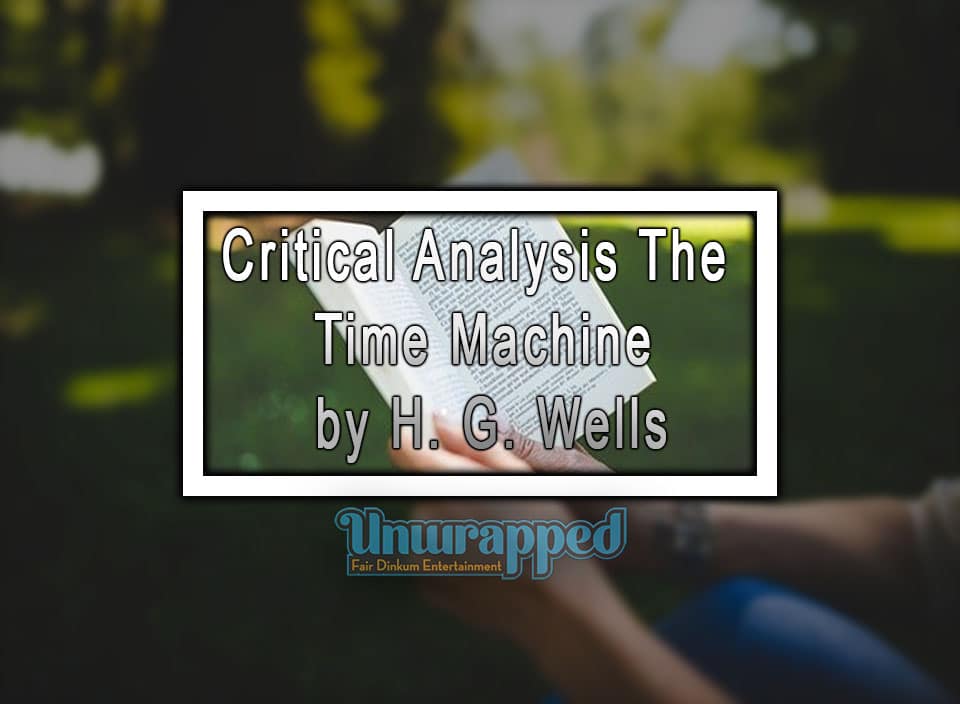 Detailed Analysis Of The Time Machine by H. G. Wells

Imagine taking a trip to the future and finding the entire human race is dead? In the Novel, Time machine by Wells, a time traveller discovers a machine that he uses to travel into the future. Little did he know, he will be travelling to the scariest future of mankind! The unnamed hero travels 30 million years into the future making this a ghost story brought to its logical ne plus ultra.

Wells switches the voice to the narrator himself. And the narrator tells them what he experienced in the year 802701 A.D. The future of the world has changed drastically and he discovers a new viscous being descended from the human race. One of the two tribes, for lack of a better word, is known as the Eloi. They are portrayed by the author as a group of creatures who are peaceful but less wise than humankind.

On the other hand, the Morlocks are more cannibalistic and aggressive of the two tribes. They seem more interesting and the author sounds like he’s comparing them to the rich men, or so I felt. More importantly, the human race is extinct. In addition, all other animals are also non-existent.

The future of England is bleak. Unfortunately, the time traveller finds himself trapped in the future. This is because his machine gets stolen. He gets all frantic until he realizes that his machine is locked away in a bronze base that’s nearby. Later, he gives up on trying to free his machine. Before you know it, the time traveller is saving a drowning Eloi. The Eloi’s name is Weena.

Weena tags along with the time traveller and he soon discovers the existence of the Morlocks. They seem to be a descendant of rich men and form the underground machine that supports Weena’s tribe. As he goes on an exploring expedition with Weena, time gets away from him. It gets dark and the Morlocks start to attack the time traveller.

The Morlocks try to trap him in their world but he luckily gets away. He travels near the end of the world; a time of cold and darkness. Then he returns to his own time.

Well, to me, the story misses a blast in the past. Though the past might be already known, I think a taste of the past would keep the conversation going. We might never know what the future holds. Each of us has a different story but the past is somewhat known.

Still, Wells was an amazing writer and the story has an elegant sense of wonder. The book is a fine adventure tale.

Herbert George Wells, born in Bromley England, left school to become a draper’s apprentice. This is a life the writer detested. Afterwards, he won a scholarship to join the Normal School of Science. Additionally, he studied with the famous Henry Huxley. Henry saw Wells as the most gifted writer of their time. Wells was known for describing World War I as a war to end the war.

Wells lived to see the worst of humanity saying in his own words that reality has taken an example from his books and decided to supersede him.

What Makes The Book So Scary?

The fact that the future of humankind is dead is what scared me the most. The book takes you to the future and you get a vivid picture of what is happening. Since the release of this book, there has been a tone of time travel novels. But none can relate to this classic.

The scientific concept of time travel, however, is rather weak but you can’t say whether this writer’s thoughts are true or false. More importantly, imagine the rich and powerful overpowering the entire universe? That’s something that I guarantee you, everyone dreads.

I love the fact that I get lost in the words of Wells as if I’m the time traveller telling the story. The writer brings to life a concept that most people only imagine. More to that, it’s something we all want to see; the future.

Spice it up with a bit of imagination mixed with the end of humanity and Voila! You get an amazing book that will quench your imagination.

Dystopian literature at its finest with Ralph Jones’s Upcoming Novel – Survival Diaries – The World You Think You Know.

What is the central idea of The Time Machine H.G. Wells?Throughout The Time Machine, Wells shatters numerous not unusual assumptions of the human idea (for instance, the perception of the inevitable progress of the species, the perception that technology will make human lifestyles higher, and the insistence that humans are in the middle of the universe and could bear for all time).