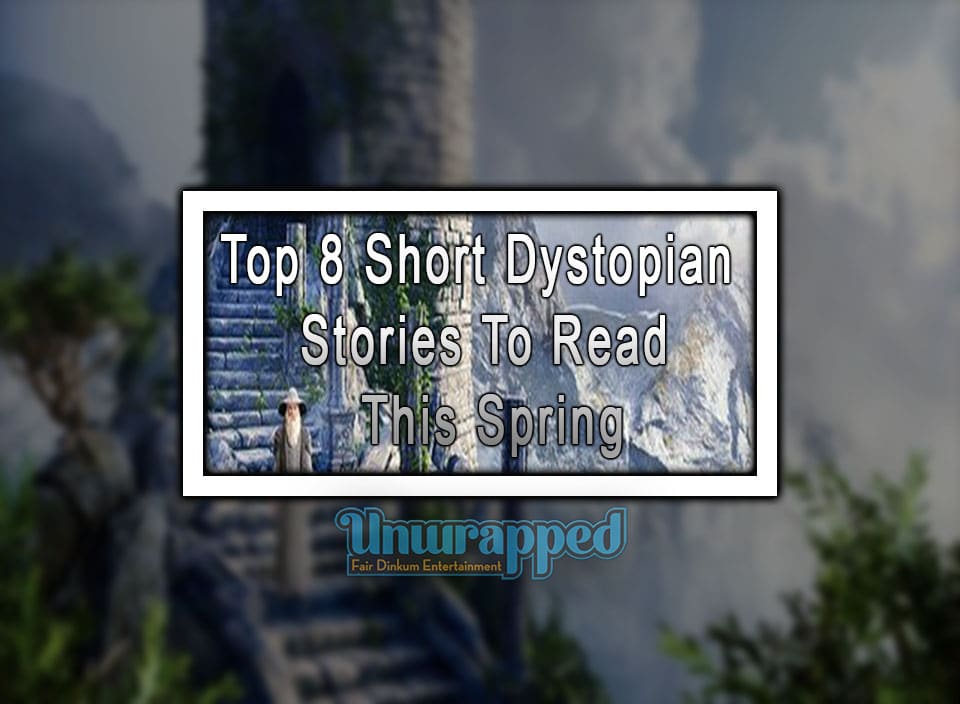 Knowingly or unknowingly, we are currently living in a world of dystopia. Some of us may accept it, and others won’t.

However, the truth remains that a few essential elements of what makes a dystopian society are happening now. Perpetuating war, police brutalities, riots, global warming, mass surveillance, and technology going berserk are just a handful of features of dystopia.

With that said, I’ve come up with a collection of short dystopian stories that can make your nerve, wracking; spine, chilling; heart, throbbing; and mind, boggling. They are perfect for one sweet flash reads.

One good example of a dystopian novel that’s a perfect, sweet flash read is the classic short story “The Lottery” by Shirley Jackson.

Printed and produced in 1948, Jackson’s short, gripping tale chronicles an annual rite that happens in an imagined, fictional small town in modern America called “The Lottery.” The ritual selects one member of the community who will get stoned to death.

As implied in the narrative, the practice takes place to make sure the continuous well-being of the members of the community. Due to its thought-provoking plot, the book reportedly receives quite a bit of negative reception, and apparently, even gets a ban from the Union of South Africa.

Nevertheless, it receives a smattering number of dramatisations and gets subjected to plenty of analysis in both sociological and literary areas, and earns a recognition to be one of the most popular short stories in literature.

The Ones Who Walk Away from Omelas

This philosophical fictional short dystopian narrative of Ursula K. Le Guin entitled “The Ones Who Walk Away from Omelas” is another option for quick reads.

Almost all, if not all, of the books of Le Guin, wrote have ingredients of both utopian and dystopian, like her novels “The Dispossessed” and “Always Coming Home.”

“The One Who Walk Away from Omelas” has similar recipes to that of her two notable works. She intentionally crafted it to be both an indistinct and clear storyline that illustrates a summer festival in Omelas, a utopian city.

People of Omelas depends on their prosperity on a single child’s relentless misery. It starts by describing the first day of their glorious festival, which features children on horseback.

Everything seems to look vibrant and festive every day in Omelas, but behind the incredibly shimmering of bright delight and happiness is the disgusting truth that makes the old and the young ones, who unravel this dark secret, leave the city, as the title depicts.

Commonly confused with Jerry B. Jenkins and Tim LaHaye’s “Left Behind: A Novel of the Earth’s Last Days” due to the similarity of the main title, Cat Rambo’s short narrative chronicles a sci-fi approach to how the elderly get treated by the society.

“Left Behind” is a forty-four-minute and forty-seven-second short dystopian story, which is part of Neil Clarke’s magazine “Clarkesworld,” Issue 116.

It follows the main character Shi, who is living in a world where money talks. They can be anything or anyone they like as long as they can afford it. Her job is to manage elderly clients, who will pilot the Starships through the galactic space.

However, as Shi’s job is about to conclude, one of her remaining clients causes or presents an additional challenge to her work.

The story depicts a futuristic world where the elderly people can choose to live a longer life in young and healthy bodies, and Shi tries to convince her last client that getting the procedure is the best way to avoid her quarrelling children, who might also be fighting with her will.

The elderly client is reluctant and is getting a lot of pressure from her relatives, which makes things even more complicated and hard for Shi, and this is where the lessons and values of morals and ethics take place.

An E.M. Forster classic, this speculative, science fiction short dystopian story takes place in a futuristic world where mankind is living in the underground and relying on an enormous machine.

Published in 1909, “The Machine Stops” has a total of 12, 300 that describes a post-apocalyptic world. It is during the time where the majority of the population can’t live on Earth’s surface due to the catastrophically dreadful condition.

Everyone is living in a standard room underground or below the ground and relying on an enormous mechanism called the global “Machine.” In this world, travelling is unpopular and hardly necessary yet allowed.

All communication is through instant messaging or video conferencing machine. From these, people execute the only activity they do, and that is to share ideas and define what passes knowledge.

As the story progresses, the male character tells the female lead that the “Machine” is faulty and about to break down, which he refers to as “The Machine Stops.” With the machine’s deteriorations, people’s knowledge and skills decline as they became highly dependent on the machine.

Forster later tells how the main characters came to a realisation of the importance of humanity’s connection to the natural world.

The author of the dystopian book “Slaughter-House Five,” Kurt Vonnegut, created a beguiling short story of dystopia with “Harrison Bergeron.”

He published the book in 1961, and one of his classic literary works, it follows the life of the title’s namesake. The plot tells a future-dated world where various constitutional amendments dictate the status and life of people.

With these modifications, people are completely equal. No one should be more attractive, smarter, and more capable than anyone else. You shouldn’t be extremely smart, beautiful, and able, or you’ll get held back by the government.

That said, citizens get forced by the agents of the “Handicapper General” to wear masks if they are too beautiful or handicapped appliances for those who are able. Intelligent people get to listen to loud radios, and the strong or athletic people should carry heavy weights.

“Harrison Bergeron” is the epitome of all that. He’s young, tall, handsome, perfectly built, and a genius. Most of all, he disagrees with the law of the land, which creates a problem with the government. Thus, taking him away from his parents.

Another exciting short dystopian story by Kurt Vonnegut that references the popular phrase and pertains to a telephone number is his 1962 classic novel “2BR02B.”

This phone number directs to the “Federal Bureau of Termination,” which is an assisted suicide department that can schedule a citizen’s wish of date to die. Set in an imagined, futuristic society where aging is impossible, anyone lives in the world indefinitely, as death doesn’t happen by nature.

That is why the government has to impose an unbelievable and mind-blowing law to control the population. They allow anyone to contact the number, as the title’s namesake, to schedule their death. For a baby to be born, one must be willing to die.

Bloodchild and Other Stories

From one notable dystopian author to another remarkable storyteller, Octavia E. Butler brilliantly crafted these series of stories and essays, which is a speculative, science fiction.

Winning two prestigious awards from “Hugo” and Nebula,” this 1995 originally published collection describes a world where people escaped earth and settled in a planet of insect-like aliens called Tlic.

Due to its impending extinction, Tlic uses the child’s human body to host their eggs to preserve their civilizations, and among the chosen children is a young boy named Gan, but who’s in the middle of a predicament of sacrificing his life or saving the race whom who saved him and grew up with all his life.

Minority Report and Other Stories

Known for his brilliance in sci-fi literary culture, Dick wrote intriguing and mind-boggling stories that will either make you laugh or cringe. Some will make you stop and ponder. Comprises of six short narratives, including his notable work “The Minority Report,” which tells a story of a special police unit that can see the future crimes before they even happen.

“We Can Remember It For Your Wholesale,” tells us a story, which is similar to that of “Total Recall,” of a guy’s yearning to have more exciting “memories,” placing him in danger.

“Paycheck,” on the other hand, follows the life of a mechanic, who has no memory of the last couple of years of his life and finds a bag that will unlock past secrets and give him a future.

The other two stories are “Second Variety” and “The Eyes Have It,” which are a contrast from one another, as the first one gives you a spine-chilling “Screamers-like” narrative and the second one is a laugh-out-loud short story.