25 Facts About BTS That Will Make You A True Fan 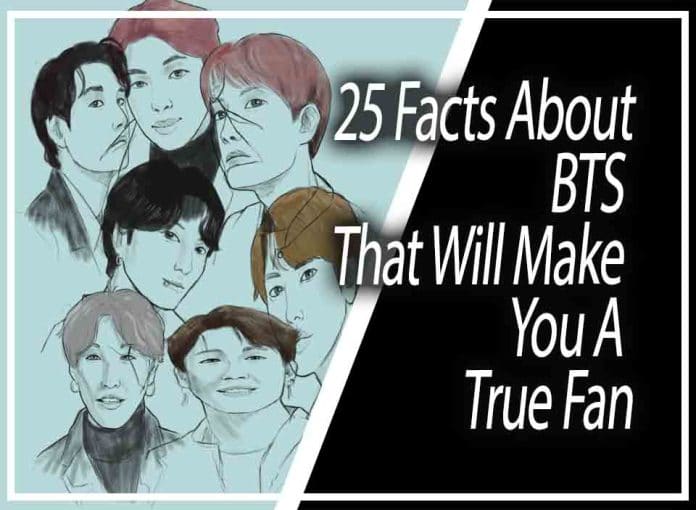 With BTS’s ARMY rising year after year, all new fans should know some key facts about the group. If you’re one of their avid fans, commonly known as the BTS Army, or just curious about one of the most prominent pop singers, the top 25 facts about BTS will make you a true fan.

From Korea, the seven-piece band has seven members, three rappers, and four vocalists to create what is essentially the ultimate boy group. The members are RM, Jin, Suga, J-Hope, Jimin, V, and Jungkook. These have become household names the world over thanks to their fantastic choreography and unique sound.

Like any other K-pop group that has achieved great success, BTS has its fandom, including millions of individuals from South Korea and worldwide. ARMY is an acronym for Adorable Representative M.C. for Youth. On July 9, 2013, KST, the official fandom name, was formed and published on social media.

Their band name translates precisely as the Bulletproof Boy Scouts. Bangtan means resistance to bullets; therefore, it implies blocking off stereotypes, critiques, and expectations that shoot like bullets at teenagers to maintain the values and ideals of today’s adolescents.

The official BTS lightstick is generally used to cheer on BTS during concerts or live shows where they are performing.

Because it was built with the ARMY in mind, BTS’s version of the light stick is known as a BTS ARMY Bomb. The light at the top of the lightstick is like a globe, symbolizing how global BTS’s ARMY is. It is black with the BTS symbol at the bottom of the handle.

The BTS maknae line is used to denote the group’s youngest members. The Maknae unit is composed of Jimin, V, and Jungkook.

The oldest members of BTS are Jin, SUGA, J-Hope, and RM. Hyung means older brother and is only used by men to refer to an older man. This case relates to a group of two or more persons who share the same characteristic defined by the last term.

Bangtan Bomb is BTS’s short video that has been posted on their YouTube account. These films include members enjoying a good time behind the scenes at music shows, award ceremonies, events, and live stages. As part of it, dance practices are also released.

Because of his skill, fans call Jungkook the Golden Maknae. Jungkook is the maknae since he is the youngest member of BTS. The golden nickname is just a reflection of how good he is at anything he does.

9.      Smeraldo is a fictional flower from the BTS Universe.

The Smeraldo is a fictional blue and white flower made by BTS. It has been mentioned several times in BTS media or music videos. This flower was shared with the public on August 9, 2017, when Jin tweeted a picture of it around a month before the first Love Yourself album release. Before the Love Yourself: Her comeback, the first reference to Smeraldo came in 2017 through a Smeraldo Flower Shop blog managed by testesso.

10.  Taekook is the most popular BTS ship.

Taekook is V and Jungkook’s friendship mate. Taekook is the most popular BTS ship, and their reference is a way of a charming, supportive, and wonderful friendship!

V and Jungkook seem to be very close and always make fun of one other. It appears that fans have also designated April 5 as Taekook Day.

This signifies that I will continue to trust and love you for a long time. As a result, purple is more than simply a color; it represents the love shared by BTS and ARMY members. Purple symbolizes love, trust, and commitment.

14.  They have been nominated for hundreds of awards shows.

The band has been nominated for 475 awards and has won 315 of them. This makes them one of South Korea’s best-selling and most successful boy bands.

The BTS members like video games, and one of their faves are Crossy Road. They even tweeted the mobile game to demand goods. After receiving their gifts, the guys took photos with the little chicks.

Jin was the member that stood out for his appearance and abilities. Aside from playing the piano, Worldwide Handsome is also highly athletic, excelling at tennis and golf. BTS Jin excels at various sports and games, as seen in several RUN BTS episodes. He is a highly sporty person who enjoys snowboarding, golf, wakeboarding, tennis, surfing, scuba diving, and many other activities.

17.  BTS members are close to each other.

BTS has a brotherly relationship. Most idols did not share dorms; instead, they had separate dorms, but BTS shared a dorm. They had the option of living in different dorms, but they declined since they wanted to stay together and did not want to feel lonely. The members of BTS are so close that they can converse without using words. They can effortlessly communicate simply by gazing at each other, especially when performing on stage.

The group is the first Asian performer to achieve five billion streaming on Spotify. This is because of their immense popularity and significant impact on K-pop and mainstream music industries.

BTS’s debut single album, 2 Cool 4 Skool, was released on June 12, 2013, by Big Hit Entertainment and distributed by Loen. The singles No More Dream and We Are Bulletproof Pt. 2 helped promote the album. No More Dream was BTS’ debut song, and the lyrics were written by BTS members RM, Suga, J-Hope, and its producers.

20.  BTS’s music video has the most comments in YouTube history.

BTS’s music video has now gotten the most comments on YouTube.

The music video for DNA currently has over 6.4 Million comments on YouTube, making it the most commented music video. They replaced Psy’s mega-hit Gangnam Style, which previously held that title.

21.  BTS has broken many records in the past years until now.

BTS has broken more records than anyone can imagine. BTS has also begun making appearances on American television. They became the first Korean band to appear on Saturday Night Live in April 2019. Their album, Love Yourself: Tear, became the first K-pop album to debut at number one on the Billboard 200 in 2018. The publication of Map of the Soul: Persona was the group’s third number one on the chart in less than a year, making them the first group since the Beatles to accomplish so in less than a year. BTS smashed the record with the most Twitter interactions. The list of records they’ve broken is endless.

Worldwide Handsome Jin went to primary and high school alongside his friends before becoming a part of the award-winning K-pop group. Jin of BTS attended a camp in Australia in 2007. He even apparently flew to Australia for several weeks as an exchange student in 2007.

BTS collaborates with the United Nations Children’s Fund (UNICEF) to create global campaigns against violence against children and adolescents. The LOVE MYSELF campaign by BTS and Big Hit has earned $2.98 million internationally for UNICEF’s mission to eliminate violence against children and young people. It also aims to help adolescents all around the globe open up about their personal experiences.

The band’s music is frequently set in an alternate universe. Big Hit Entertainment, BTS’s management business, established the Bangtan Universe or BTS Universe. It is a fictional narrative that includes short films, novels, webtoons, and music videos that follow the characters based on the band members. The universe, which first debuted with the song I Need U, now appears in every music video.

BTS was supposed to be a hip-hop group similar to YG Entertainment’s 1TYM. Still, between their formation and debut, Bang Si-hyuk decided to create an idol group similar to Seo Taiji and Boys, who were popular in the 1990s. He wanted to produce a group that could freely make music relevant to society.

Stay Connected
41,936FansLike
5,684FollowersFollow
820FollowersFollow
Previous article
BTS: A Step-By-Step Breakdown of the South Korean Boy Band’s Net Worth
Next article
The Truth about BTS: How Much Money the Boy band has Made so Far