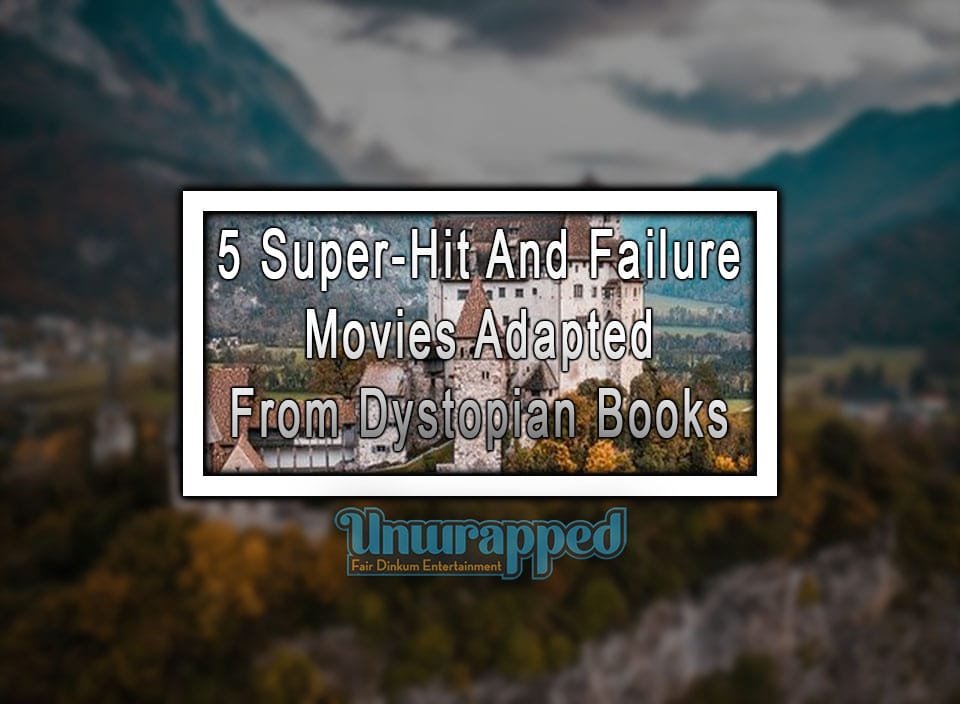 Adapting Dystopian Novels To Movies, Is It a Better Choice?

There is always this particular moment when you read a book and then you wish it is available as a movie. The emotions, the imagery, and action in your head; these are things you imagine to see on tv, and you want to relive every minute.

The passion is often on the high side when the book is dystopian as you will want to see this fantastic work of art, take human form.

Movie directors have often tried to immortalize great books. This they do by producing adaptations of the books, the debate is still hovering around for years now about which between movie adaptation and the dystopian novels is the better choice.

This review will help us to arrive at a decision on which is better between dystopian books and movie adaptations; before that, let’s answer the question, what are dystopian books?

Dystopian novels are often set in future; these books often showcase the society and the evils in it and proposes an extreme contemporary society. Dystopian books present a terrifying validity to show the would-be consequences of societal actions and the flaws that often-beset humanity.

They usually represent the political opinions of the writer and propose a vision of what society will become. Examples of dystopian books include; 1984, Animal farm, blade runner, and 20 years after.

5 Dystopian Books whose Movie Adaptation was a success

This argument favors the divide that believes the movie is better, and the success of these movie adaptations supports this position entirely.

The movie adaptation of this epic novel is a success that favours the divide that believes the movie is better. The cast and the narration were lucid and communicated the profound truths of the book.

While the movie portrays such themes as the effect of complicated societal matters, how it affects society and the family, which is a theme in the novel, the social impact the movie made is staggering and holds sway to the point that film is better.

The novel by Robert Heinlein came alive in the movie adaptation. The impressive cast and the excellence that went into the movie, which received tremendous accolades, shows how great books can make blockbusters.

The ability to match imagery and reality is better appreciated in Starship troopers, a truth for which most readers will gladly skip the novel for the movie. The success of starship troopers shows that the film is better!

Another epic representation of film is better is the masterpiece “Snowpiercer” the movie adaptation reinvigorated the novel, and this is an exciting retelling of a great book.

The success and great reception the movie adaptation received on its release made the cast and directors to come up with a tv series based on the novel that was launched on the 17th of May 2020.

The novel by Phillip Dicks had two movie adaptations, and the original, which is named “Do androids dream of electronic sheep,” is one great success that stands out on this list of movie adaptations.

The movie, which featured the great Harrison Ford, is nothing short of elegance, style, and exceptional artistry. It represents a triumphant retelling of the great novel, which has received enormous accolades in the movie industry.

The movie adaptation of Anthony Burges’s book can be said to be the most excellent movie of all time. The theme of violence in a futuristic society with smart and very unique youths was nicely matched with reality in the movie adaptation.

The movie’s incredible success and the narration is just epic, and this stand to tell more on the point that film is better.

Five Movie Adaptation that failed to match their books

Bringing to life great books is often tricky, as it is not easy to render a somewhat complicated narrative in a movie. This list shows failed attempts to achieve success with the movie adaptation of great dystopian novels, as the films lived short of the glory of the book.

The movie adaptation of the celebrated novel 1984, failed to live to its expectations as it didn’t command such great reception in the movie world. The narration and the storytelling were far from the emotions, and the imagery the George Orwell’s book carried and commanded.

Making it to find its way on the list of failed attempts to retell a great novel in film, as you can easily skip the film for the book.

The adaptation of the novel is another justification that the book is better, as the story failed to command the novel’s tangible fears. It is often said that the narration is a complete departure from the book.

While the cast was impressive and all good, one can easily tell the difference between the novel and the movie.

I am a legend

The movie adaptation, released in 2007, had a fantastic movie cast with the incredible Will Smith. While the movie can be credited for making a breakthrough in vampire fiction, which is today a cherished form of film.

It must be stated that the movie lacked the substance that made the novel so exceptional and unique. Some will say it is hard to relate the resemblance the book and the film shared, as the story is preferred and serves as a better narration to the movie adaptation. Books are better!

You can easily visualize the events in this unique book. The fathomless and somewhat incomprehensible intellectual prowess of George Orwell can be envisioned when the book title Animal farm is called. So much was the love and respect the novel received on its release. However, the 1999 movie adaptation of the story never lived to match the novel’s enormous readership.

While the cast can be adjudged to be impressive and excellent, the movie adaptation is a departure from the narrative genius of the great George Orwell. Book is better

While Ray Bradbury is said to be the most celebrated American novelist for his storytelling abilities and great literary mastery, the 2018 movie adaptation of the book Fahrenheit 451 can be best described as a car crash, this is so, as the movie failed to live up to the source.

The movie adaptation can be quickly forgotten as many people will prefer the novel to the movie.

Which is a better choice?

While we have examined some excellent movie adaptations that gave a better description of its source, some adaptations failed to command the love and cult followership the novels receive.

What is best can be said to be subjective rather than a one rule fits all, kind of a situation. However, the following conditions can best decide which between movie adaptation and dystopian movies is best.

This will save you the long hours it takes to follow through a novel, and somethings it can be annoying as writers often fail to create the right imagery in our minds; some other times, they often exaggerate facts.

This expedition is saved when you go instead for the movie adaptation of the novel.

Another advantage is the truth that most movie adaptations don’t live up to their expectations and the narration in the books, and you will always get a better return for your time when you go with the books against the movie adaptation.

It is believed that these twin points will guide you to decide which is the most suitable choice for you and which is better, between movie adaptions and dystopian books.

Simultaneously, modifications and improvements are made to present a complete narration on a movie.

Sometimes, these improvements and changes take away the substance of the book, this is why reading a dystopian novel and seeing the film can be described as a complete all-in-one package for you. This will provide the needed balance of narration for you.