Top 10 Of The Best Neighbouring Islands Near Australia To Explore 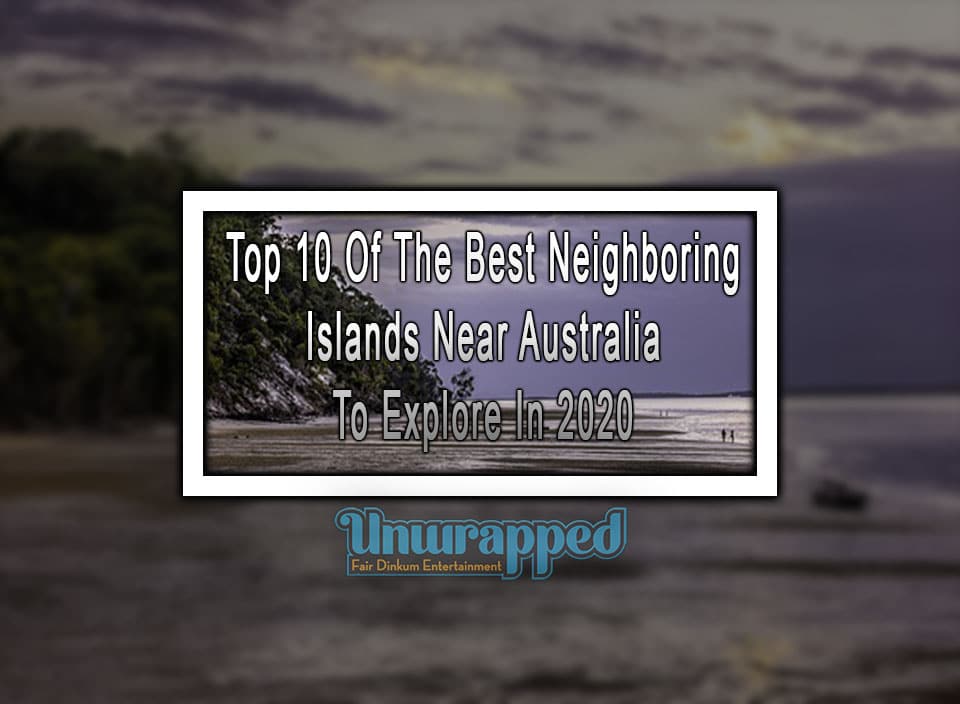 Australia being a country/continent of 8,222 beautiful islands with different cultures and traditions is a worth visiting place. Due to the abundance of islands, the country has a variety of beaches and popular outback. All of the islands and associated beaches have a different peculiarity, which you can cherish for a lifetime. Australian culture is an amalgam of modern cosmopolitan and aboriginal traditions so the different islands of the country offer something for everyone. So the next time you visit Australia, make sure you see these spectacular islands in Australia.

Among the most sought tourist island destinations in Australia is the Whitsunday Islands. This is the most popular of the Australian islands at the East Coast. The Whitsundays are a collection of 74 islands which are located in the Great Barrier Reef Marine Park. Among these, the largest in the Whitsunday Island featuring white sand crystals and blue crystal clear waters. The iconic Whitehaven Beach is part of this island. The sand on this beach is considered so pure that you can actually brush your teeth with this sand.

Located at the coast of South Queensland, Fraser Island is another spectacular island of Australia. Tourists visit this island due to its adorable land features constituting of ancient rainforests, freshwater lakes, and regional exotic biodiversity. Besides these attractions, the major reason people visit this island is that it is the largest sand island in the world. This island is so large that it has 75 mile Beach which also has an airstrip. Small aircraft from Sunshine Coast bring visitors to this island. If by any chance you are able to visit the island from August to October, you might be lucky enough to spot Humpback whales. There is amazing fauna waiting in the Land of Fraser Island. Many mammals which are the inhabitants of this place include sugar gliders, dingoes, wallabies, and possums. The best time to visit this island is winters from May to August or during summers from September to April. Extensive rainfall in the region happens from the month of January to March. However, a visit to Fraser Island is quite expensive. But we can spend this much just to be close to the Great Barrier Reef.

Rottnest Island is situated on Australia’s Western Coast at the south of Perth. This island is known for its rich history because it was a military base during wars. Another famous thing about this island the Quokka, which is a unique Australian animal and is found only on Rottnest Island. The beach of the island features adorable reefs and amazing beaches which are rich for swimming. You can hire a ferry or snorkel in the clear waters of this island. The island can be reached easily through a ferry ride of 90 minutes. When you will reach the island, you will find out that it houses a number of peacocks and quokkas. There are 20 attractive bays and 63 beaches which constitute the Rottnest Island. This island is a favourite island among travellers because the island offers something for everyone. The beaches here are meant for swimming and snorkelling. You can enjoy the amazing wildlife on the island or play any of the water sports. It is said that Rottnest Island is a dream of every nature-loving person. If you visit this island from October to November, the beach is at its calmest.

Bruny Island is located at the southeastern shore of Tasmania. If you are an island lover than a visit to this island is a perfect day trip destination. There is a thin stretch of land which is nicknamed as Neck. Here lie Trugani steps, which basically is a steep wooden staircase that takes you to the memorial of island’s original inhabitants. These are 279 total steps and after covering these you will be able to see amazing panoramic views. You will be rewarded as you see natural rock formations in the Tasman sea. Besides this staircase, you can enjoy boating as well as fishing on Bruny Island.

One of the most attractive tourist destinations in South Australia is Kangaroo Island. Kangaroo Island is the third largest island in Australia and is accessible from Adelaide. The island is famous for its exotic biodiversity. Here you can spot kangaroos, koalas, wallabies, sea lions, fur seals, and many more animals. The 9-inch long-tongued echidnas can also be spotted here. During this visit you can explore the tower rock formations, cliffs swept by wind, shorelines, and forests. If you are a nature lover, you will surely love this place. The best time to visit Kangaroo Island is from June to September when most of the flora and fauna of the island is revived. Rivers, greenery, beaches, animals and what not? Visit this island let you explore all of this.

Magnetic Island is located in Queensland. The island is becoming one of the most booming destinations for backpackers. The reason for visiting this island are a reef, beachfront bars, koalas and beautiful walking trails. The Magnetic Island hosts the very famous Island Life Beach Festival. You can take a ferry ride from Townsville to visit this island. Most of the unique wildlife of Australia is inhabited on this island. More than half of the area of Magnetic Island is covered by National Parkland. There is a sanctuary for animals including koalas and wallabies. Also known as Maggie, this place is very famous for snorkelling. The island is named as such because it has a magnetic effect on the ship’s compass. There are around 20 beaches on the coastline of Magnetic island. People visit this place to relax and enjoy the biodiversity.

If you are in Melbourne, then you must visit the Phillip Island, which is just at a distance of one and a half-hour drive. The island is known for its coastal wildlife, cuisines, and culture. Around three million travellers visit Philip Island annually. And above all, the island is crowned with penguins and the reason behind most people visiting it is for penguins. When you visit the place, you will see an army of adorable penguins waddling towards their home at the time of sunset. You can also enjoy biking, fishing, hiking and sailing on this island. The best time to visit this beach is from September to February when you can surf or fish. If you visit from May to October, you might spot some whales.

Take a ferry ride from Cairns and reach Fitzroy Island. This island is a little less crowded as compared to Green Island, which is situated very close to it. There is a trampoline in the ocean too. On this island, you can enjoy the beachfront bar, kayaks, snorkel or just paddleboard. There is a rainforest in which you can walk around. And while you are on Fitzroy Island, enjoy the Great Barrier Reef.

Christmas Island although it is much further away from other islands and tourist destinations, is an amazing place to visit. The island is located close to Java and Sumatra. The island is named as such, because it was named on the 25th December 1615. Up till the early 1800s, this island had a very low population. But in recent times, this island inhabits people hailing from different cultures including Malaysians, Chinese, Indians, and Australians. Christmas Island is popular for its biodiversity. There is a large variety of indigenous plants and animals. We can say that around 60% of Christmas Island is protected by national park. The red crab is the most famous species on this island, that too because of massive crab migration which takes place every year in November. It is a feast for eyes and is considered to be one of the greatest natural wonders in the world.

Read More: What are the Best Places to visit as Backpackers in Australia?

Located in New South Wales, the Lorde Howe Island basically lies between Australia and New Zealand. It was discovered in 1933, and as compared to other islands of Australia it is not modern. However, the resorts in this place are quite luxurious. You can enjoy warm waters for diving, swimming, and snorkelling. Because it is largely uninhabited, the place offers crystal clear waters and beautiful vibrantly coloured birds to the people who visit. Most people visit this place from June to August. But if you want to enjoy warm temperatures, then visit from October to April. However, only 400 tourists are allowed on the shores of this island.

Since the continent is surrounded by waters, it has amazing water travel destinations within the maritime borders. The islands sizes have different ranges, some are as big as Tasmania and some are so small that they disappear in the water when the sea levels rise. Most of these islands cater to tourists from around the world due to different geological features, wonderful biodiversity and many surprises for nature-loving and adventure loving people.

Where do Australians go on holiday?

According to the report, in 2016 the most popular holiday destinations for Australians were New Zealand, Indonesia (including Bali), and the United States. The report also showed that over the past five years, the number of Australians taking overseas trips has grown by about 5 per cent each year.

Also See : Top 10 Amazing Things to do in Barcelona

How to survive a road trip with an infant

9 Must-See Destinations In The UAE