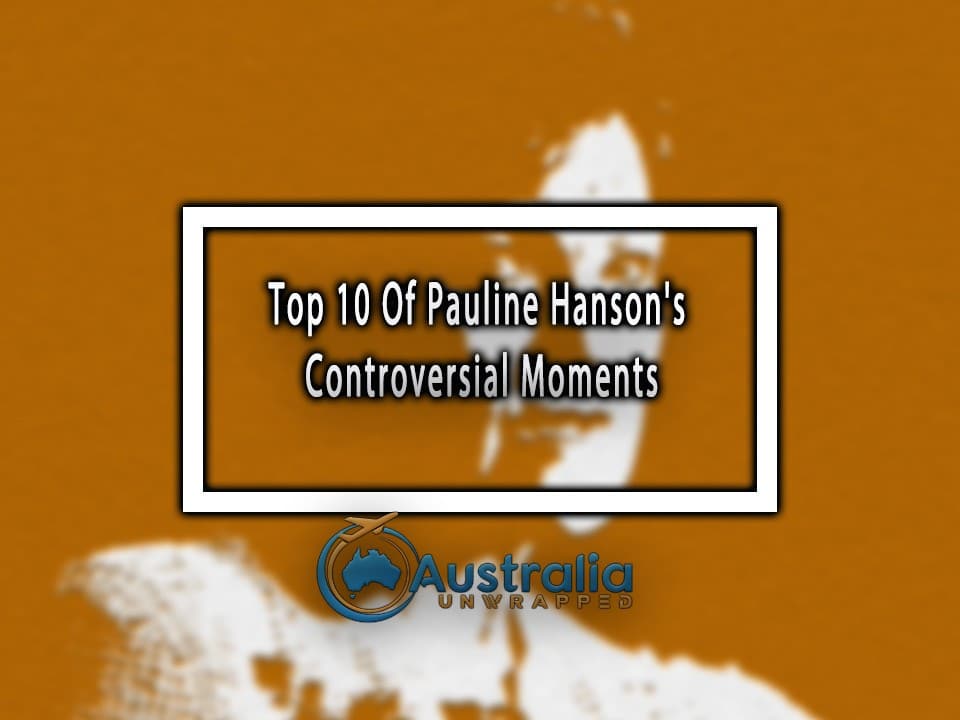 Pauline Hanson has been one of the most talked-about personalities in recent times. She is quite well-known for her nonconformist (and sometimes offensive) remarks. That’s the primary reason she draws attention to her.

Her outlandish remarks tend to stir controversy after controversy for her. She’s often in deep trouble for the political stunts she does, but she does not care a lot about it as she seems to be getting used to it.

Pauline Hanson is the Co-founder and prominent leader of the One-Nation Party of Australia that advocates ostracizing all other races and sticking to pure Australian breed. The party’s central policy is to nullify multiculturalism and preserve western culture in all its eternity.

Here are 10 most controversial moments of Australian Politician Pauline Hanson:

1. Hanson Wore a Burka To Parliament To Mock The Muslim Custom

When the ban on face-veil was being discussed in the parliament, she arrived wearing a burqa, which was nothing but a mockery directed at the Muslim community of Australia. This was really insane of her to make a caricature of Muslim customs. If she wanted to oppose covering of the face, she could have done it in an otherwise way. She did this political stunt to woo her supporters and like-minded people but ended up evoking booing and jeering aimed at her.

2. Hanson Mentioned Asian Immigrants In Her Maiden Speech – That Too, In a Quite Despicable Way

In her debut speech, she tried to instil the Australians with a fear of Asian immigrants taking over their country. She tried to incite her compatriots against the Asians who were bursting into Australia in enormous numbers back in the 1990s. She did not even care about sugarcoating her vexed viewpoint, she said it in a rather straightforward way.

3. Hanson Returned To Politics With An Agenda Against Multiculturalism

There was a time when she left politics and decided to settle somewhere outside Australia as she had been disappointed with the consecutive defeats she bagged. She did make a comeback with an even more aggressive agenda — and this time it was multiculturalism that she wanted to toy with. She tried to paint multiculturalism as a threat to the unity and national-integrity of Australians, and guess what? She was even successful in convincing some people.

She does not approve of other races blending with the Australian race — as she believes in racial purity. She also wants to save the Australian culture from malformed, she wishes to keep the local culture authentic and bona fide.

In one of her statements, she clearly insinuated that 2% of people are imposing halal things on the rest of 98% Australians. She intended to target the Muslim community, most certainly. She has done a litany of stunts that have appeased Islamophobes within Australia. She herself has been accused of being an Islamophobe herself. She proves herself a deeply polarizing personality both ways.

5. Hanson Accused South Africans of Bringing AIDS Into The Country

Hanson is opposed to various races and nationalities she sees in her cosmopolitan country. She disapproves of a plethora of communities simply because she finds them different. Hanson fails to see things from others’ perspectives, it’s her biggest shortcoming, and we wish she realizes it someday.

It was really astounding to see her raise concerns regarding the entrance of South-African citizens into Australia. She could have stated something less controversial, but unfortunately did not. She loathed South African immigrants, for she thought they are spreading AIDS in Australia.

6. Hanson Recorded a Video in 1997, Thinking She’d Get Murdered For What She Thinks and Says

Now, this was really peculiar of her to come up with a video talking about her death. She had this strange fear of getting executed, and hence, she recorded a video message where she could be seen encouraging her countrymen to carry on with the fight even in her absence. It does not need to be said what fight she was talking about. She thought people would be seeing this video when she’s no longer there, and it’s funny that she’s alive.

7. Hanson Described The Situation In Her Country As “Reverse Racism.”

In one of her controversial statements, she used the term reverse racism, which means racism against the numerically dominant group.

She made people think they’re being ill-treated because they do not belong in a minority group. She is so against the privileges being granted to the people of colour by the Australian constitution.

Read More: Australian Aboriginal Flag and The Significance of its Colours

8. Hanson Advocated Inequality Looking Down Upon Her Colleagues of Non-Australian Origin

In one of her speeches, she detested the equal treatment of people who come from other parts of the world. She said in a disgruntled tone, if some of them work with me, they become equal to me. She clearly looked unhappy with the fact that foreigners are not being treated as foreigners in Australia.

9. Hanson Doesn’t Approve of “This Is Our Land” Coming From People of Foreign Origin

10. Hanson Has Always Wanted to Abolish “Religious And Racial Vilification” Laws In Australia

Hanson claimed that her right to have an opinion is being taken away by some petty laws. She believes she is entitled to her opinion even if it offends some communities. Hanson claims that even though she’s been shushed, she has important things to say. She wants to scrap out some of these laws straight away. Maybe because she wants to castigate other religious and racial groups unimpededly.