Skip to content
You are here:Home / Top 10 Of Peter Dutton’s Greatest Achievements 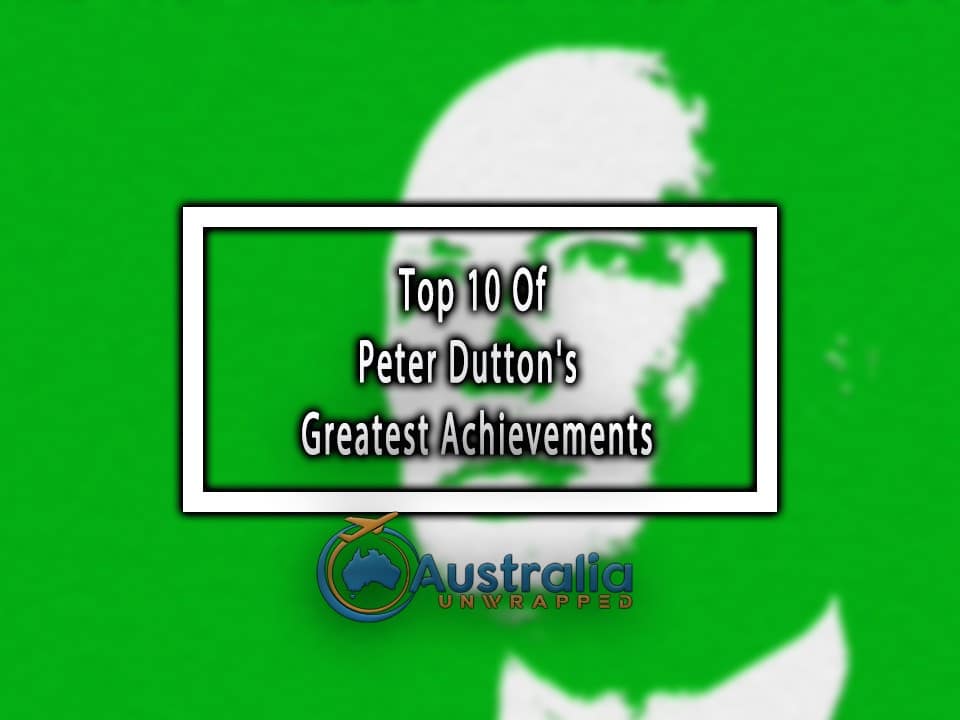 Peter Dutton, as we all know, is currently serving in the government as the minister for home affairs and remains a stalwart of The Liberal Party of Australia. Nobody really knew who Dutton really was until Peter Costello discovered him; Costello was the first one to see a hidden statesman in Dutton.

Dutton grabs the limelight every so often for his off-centre and bold remarks and/or actions. It’s primarily because he is not an expedient politician. He does not like to get his motives cocooned, he does what he believes in — that too very overtly.

Many people might not be happy with the decisions he makes because they are tough and not easy to absorb for those who do not know an ounce about statesmanship. It’s good to be lenient and all to gain others’ sympathies, but in order to make brave and non-conventional decisions, you gotta have a spine.

According to our analysis, Dutton has what it takes to be a leader and a true statesman that Australia has been longing for, and here’s a list of achievements speaking volumes about it.

1. Dutton Served In The Police For 9 Long Years

One of the greatest achievements he possesses is, he has served the nation in multiple ways. He is not just the politician who comes and speaks before the mic and entices everyone into lauding him. He is a real tough guy, he has been in the Queensland police for 9 years approximately, and he was serving the drugs squad, to be precise. Since he has been the long arm of the law, the toughness he embodies comes from there.

2. Dutton Is An Alumnus Of The Queensland University of Technology

We know very little about his life before his entrance into politics. He has been an erudite student of Business at the Queensland University of Technology, and he is proud to have spent a couple of productive years over there.

3. Dutton Won The Dickson Seat For The Liberal Party in 2001

Dutton has won many accolades for the party he belongs in, and it is an open-secret no one can deny. Ever since he joined the party, he served the primary goals of the party with all sincerity and integrity. He has been there for over two decades, and therefore he deserves to be accredited for his overall accomplishments. He made Cheryl Karnot bite the dust and won the seat of Dickson for his party in the year 2001.

4. Dutton Abstained When Kevin Rudd Apologized Before The Parliament

When Kevin Rudd thought he was making some great sacrifice by bowing down in front of a plethora of parliamentarians asking for an apology, Dutton refused to concede to him. The entire Parliament applauded and cheered Kevin Rudd for his allegedly brave deed, but Dutton chose to abstain.

5. Dutton Sided With Abbott Challenging Turnball For The Prime Ministership

Turnball and Dutton both came out of the womb of Australia’s Liberal Party and adhered to the same political school of thought. Still, Dutton mustered enough courage to stand against his own party-mate just because he didn’t want to compromise on his views contrary to that of the latter. He dares to not care about the conventions and stand for what he thinks is right.

6. Dutton Has Castigated The Leniency In Prison Sentences

One of his speeches in the Parliament had a lot to do with the protocol given to criminals caught and confined in jail. He believes that sometimes these criminals and offenders are given more leverage than any of the civilized and law-abiding citizens of the country. He spoke vehemently against this hypocrisy before the Parliament.

7. Dutton is Articulate And Speaks His Mind Without Any Fear Of Other People Judging Him

Dutton is best known for his articulation and eloquence. He might not seem a soft-spoken man to so many people, but speaking from the heart is his recognition. Whenever he opens up, he speaks at length — that too in a natural flow. It unravels, he does not care about sugarcoating the stuff, he says it straight-forwardly and unambiguously. He does not wait for the critics and analysts to uncover his actual intentions hidden in kind words.

8. Dutton Has Been The Shadow Health Minister And Assistant Treasurer For A Long Time

If we look at his long journey in politics, there are a lot of aspects that we might be overlooking. He has had a multi-faceted political career, and he enjoyed it every which way. Suffice it to say, he served as shadow health minister and as an assistant treasurer to Peter Costello before reaching the pinnacle. He is a multi-tasker, so to speak.

9. Despite Dutton’s Conflicts With His Colleagues, He Retained His Position As A Minister

It is an art to tackle your political opponents inside or outside the party — it is pure art and looks like Dutton has mastered it. He has been loyal to his part since the beginning and never even thought of switching sides for any reason. He is a true ideologue, and he believes in sticking to the core values of the party. He does not believe in camouflaging his reservations and giving unconditional support to his party members. That’s why he took a firm stand against Turnball and lent his support to Tony Abbott, who belongs to the rival party.

10. Dutton Takes Care Of The Most Talked-About Organization, The Australian Border Force

If we talk about the best of his achievements, the Australian Border Force tops the list. He has been really concerned about the safety of borders. He has a bone of contention with those who do not believe in protecting the borders and are willing to give the infiltrators a free space to roam around. It is a no-brainer that Dutton is firmly against the illegal immigrants residing in Australia, and he pledges to get rid of them. This is why he has backed this organization that stops the potential increase in illegal immigration. He so wants to secure the boundaries of his country from all sorts of foreign threats.

Aboriginals of Australia – A Brief Story