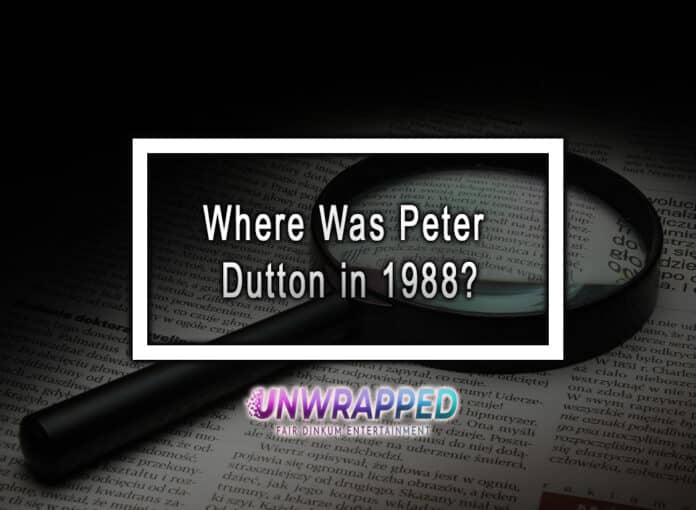 Peter Dutton is now lined up as the next leader of the opposition. However, many within the Liberal Party are questioning whether he’s the best leader for the Modern Australian public. With so many questions lingering in the air, a lot more people are getting interested in what Mr. Dutton has done in the past and how he built up his experience in politics.

As a man from the suburbs, he’s seeking to try and line up more votes from suburban voters around Melbourne and Sydney. However, many voters are still questioning whether the man himself is ready for such a position as Prime Minister.

Let’s look at some things you may not know about Mr. Dutton and the prior experiences he had before stepping into the world of politics during the early 2000s. Along with that, we’ll see what sort of policies he’s willing to back as the elected leader of the Liberal Party

Peter Dutton in 1988: Time With The Young Liberals

Back in 1988, Peter Dutton found himself as a member of the Young Liberals at the age of 18. In one of his statements against former Labor Prime Minister Paul Keating, he states that the mismanagement of the Economy back in 1988 was a key turning point in his decision to join the Liberal Party. Flash-forward to 2022 and we now see Mr. Dutton as the newly-elected leader of the very same party he joined back then.

From 1988, he won the position of policy vice-chair of the Bayside Young Liberals. After a year, he was elevated to the position of chairman for the entire Bayside branch. However, it is noted that he lost the 1989 Queensland State Election as a Liberal Candidate to Labor State Leader Tom Burns.

From there, he proceeded to have a career in Law Enforcement as he served within the Queensland Police Department. He worked for their Drugs Group as well as serving within the National Crime Authority regarding Sex Offenders.

This stint lasted until 1999 when he resigned with a rank of Detective Senior Constable. A car accident during a pursuit of an escaped prisoner caused Mr. Dutton lost confidence in his driving skills and saw him focus on different things from here on out.

After that, the early 2000s saw Peter Dutton be appointed to several political roles such as a member of the Division Dickson and eventually as Minister for Workspace Participation in 2004. He then proceeded to work as a cabinet minister for both the Abbott and Turnbull Governments, a tenure that landed him in a slew of controversies due to unpopular moves and decisions.

Now, Peter Dutton stands atop it all as the leader of the opposition this 2022. With his sights set on a potential running for Prime Minister, it’s interesting to see how things unfold. Currently, he’s shown a focus on economy and the protection of women and children. Whether his platforms sway the public remains to be seen as his camp makes moves to create a wider public image for Dutton.

Must Read: What Medical Condition Does Peter Dutton Have?

What Ethnicity Is Peter Dutton?