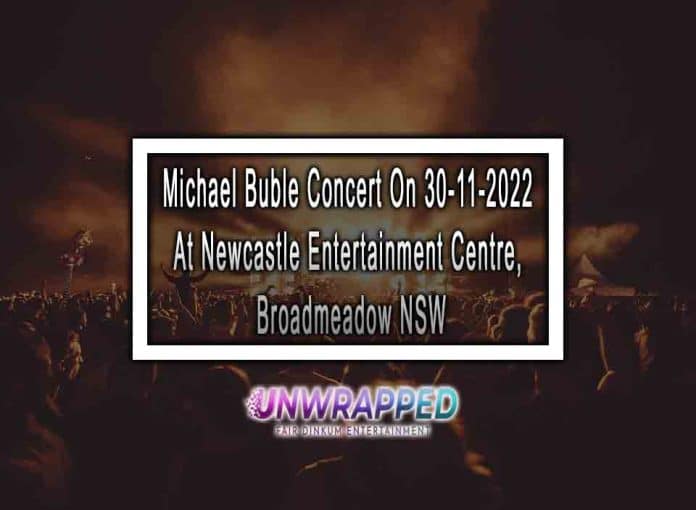 On 30 Nov 2022, Michael Bublé, a multi-award-winning, multi-platinum-selling worldwide superstar, will visit Newcastle. n The phenomenal Canadian artist will play songs from his highly anticipated 11th studio album, Higher, and some of his big successes and trademark modern interpretations of timeless classics during this six-city national tour. On 30 Nov, Michael Bublé will begin his six-city tour in Newcastle before moving to Perth, Melbourne, Adelaide, Sydney, and Brisbane.

Michael Steven Buble is a Canadian singer, was born on 9 Sept 1975. His debut album debuted in the top ten in Canada and the UK. His 2005 album It’s Time, and his 2007 album Call Me Irresponsible peaked at number one on the Canadian Albums Chart, UK Albums Chart, US Billboard 200, and numerous European charts, which helped him gain a global audience. After three days of sales, Bublé’s 2009 album Crazy Love debuted at the top of the US Billboard 200 and held that position for two weeks.

Billboard’s Top Jazz Albums list also ranked it as his fourth number-one album. His 2011 holiday album, Christmas, spent the final four weeks of 2011 and the first week of 2012 at the top of the Billboard 200 chart for five weeks at the top. As a result, Christmas became his third straight album to debut at number one. Nobody but Me, Love, and To Be Loved were all released after To Be Loved in April 2013, October 2016, and November 2018, respectively. Bublé has sold more than 75 million records worldwide and has received several honors, including multiple Juno Awards and four Grammy Awards. Bublé holds dual citizenship in Italy and Canada.

Michael Bublé last visited Australia in 2020 for the sold-out Australian leg of his wildly popular “An Evening With Michael Bublé” tour. He seized the opportunity to support Australia’s bushfire appeal by performing a live cross from one of his Melbourne shows to the Fire Fight Australia bushfire benefit concert in Sydney.

Bublé has sold more than 75 million albums throughout his illustrious career. His self-titled first album from 2003 peaked on the ARIA Albums Chart, demonstrating Australia’s early appreciation for this globally adored Canadian musician. Since then, Bublé has enjoyed four additional #1 albums on the US charts (2013’s “To Be Loved,” 2011’s “Christmas,” 2009’s “Crazy Love,” and 2007’s “Call Me Irresponsible”) in addition to three #2 singles.

When is Bendigo Easter Festival 2023