Skip to content
You are here:Home / British Risks of Remaining in the EU 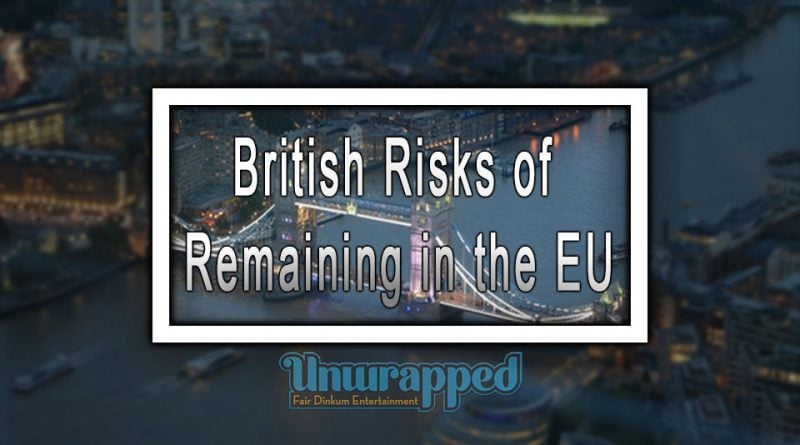 Risks of remaining in the EU. There have been many debates about the risks of the UK leaving the EU. In fact Project, Fear has been government policy since long before the official referendum campaign began.  However, very few honest explorations into the risk posed to the UK should a Vote Remain Occur?  This article will explore 5 major risk factors should the UK choose to remain part of the EU.

Risks of Remaining in the EU – EU Army

The establishment of an EU Army one of the huge risks associated with voting remains this cannot be understated. This so-called army will have a central command structure, thus leading to our troops at the behest of foreign orders, while no longer being in charge of the defence of the realm. Consequently, foreign troops without local ties could be defending theoretical an attack on say Preston. How long do you think foreigners would hold the line to defend us? Ask yourself why do you fight, and why would you fight?

Alternatively what if the EU changed leadership, in a dystopian future, say for example the people of Great Britain didn’t like the way the centralised undemocratic EU was going, we make our stand, they send in foreign soldiers to suppress and crush are rebellion, meaning foreign troops on British soil suppressing British people, and all under the banner of a single army! Meanwhile, while our own boys and girls are tied up fighting some EU propaganda campaign against our Russian brothers.

Risks of Remaining in the EU – Continental Unemployment

Unemployment in many of the EU’s southern states is already unacceptable is only going to get worse; their economy lacks the dynamism of northern Europe. Initially, the UK will have to spend more and more of our money propping up failed southern states until eventually the people see a brighter future on UK benefits and start moving north that means more people, more overcrowding and fewer jobs for the British people. British jobs for British workers will never be possible so long as Great Britain vote remains in the EU.

Risks of Remaining in the EU – Turkey Joining EU

Cameron has stated no immediate plans for Turkey to join, let’s take cast iron Dave with a pinch of salt. It’s quite obvious if we vote to remain the Turkish people will be welcomed into the EU with open arms; Cameron has previously made huge positive overtones towards the Turks. Not only does this open our nation to 75 million people from a different culture, is also will massively escalate the transfer of wealth from West to East. So while Blair, Cameron and Osborne may be satisfied we are being suitably culturally enriched, we all know who will suffer.

Risks of Remaining in the EU – The Single Currency

The Euro is coming, make no mistake, a Vote Remain means we will have to adopt the Euro. It might not be one year, maybe not even three years, however with-in five years of a Vote Remain the Euro is coming. To be clear what this means, once a country surrenders her currency to overseas powers, it loses control of her economy, and thus the people are exposed on all flanks. The EU already has huge accounting issues, now imagine handing control of your currency to a corrupt and morally bankrupt dictatorship.

Risks of Remaining in the EU – Europe Without Borders.

The British Schengen zone opt-out is currently the last shred of border control the United Kingdom has. However, the EU diktats plan to abolish our border post Brexit as part of the European Union super-state plan. With the migrant crisis creating havoc on the continent, imagine Britain without borders, and our soft-touch government, as a nation the UK would be overrun. Not only that, but the Schengen scheme also removes all ability for our nation to identify who has arrived on British shores, therefore the UK with our cotton gloved police force, and politicians without metaphorical balls would likely become the go-to place for Europe’s gangsters and evildoers.

In conclusion, the risk is not that we vote to leave, become an independent nation and thieve in a global partnership as equals. Keeping both our heritage, culture and cultural identity intact! The risk is the Britain votes remain and falls headlong into a EUSSR dictatorship, with no control over our defence, spending and national interest.  The only sensible and realistic way to save the UK is to vote to leave in overwhelming numbers. As once we are free of Europe, real change at home is coming next.

Brexit is coming, we must not surrender: