Australian History – Before And After – 1901 The Founding of A Nation 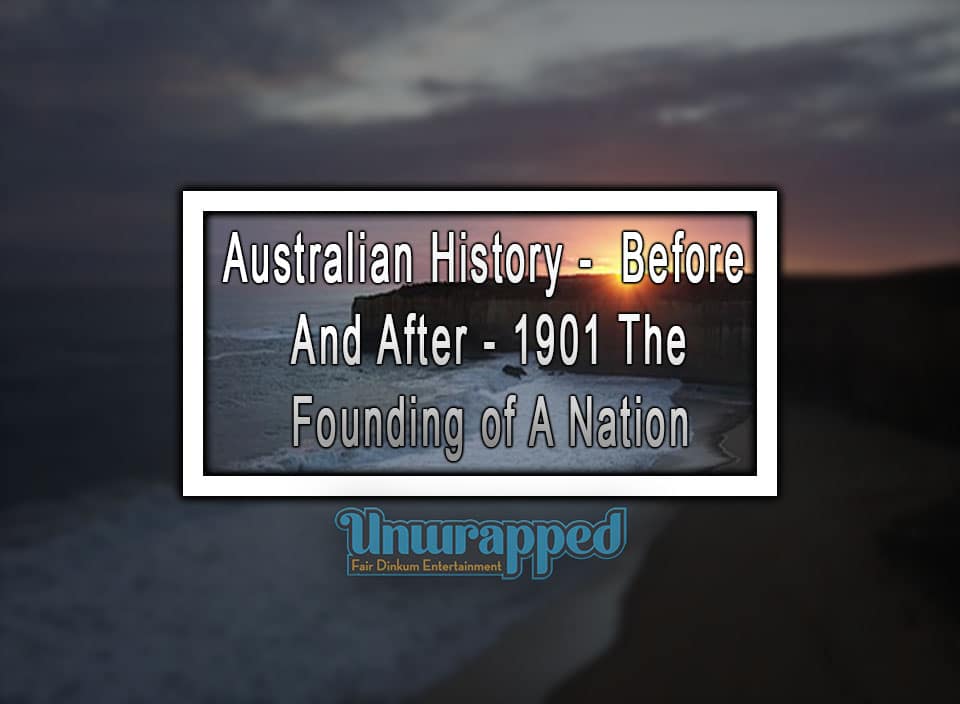 The Before and After of Australian 1901 History

Australia, a country and a nation, originated from the British rule by immense struggles. Also, untiring efforts of their people, representatives, and leaders. Their realisation to the unjust dominancy of foreign rulers and invaders gave them the power and spirit to fight as a nation. Also, to take their country back and save it from a foreign culture, tradition, and rule. The focus remained on their educational, social, cultural, political values, and identity to ultimate progress and move forward as an independent Australian society.

1. Australia Before 1901 – The Period of British Dominance

The arrival of the British in Australia dates back to 1788 when the first British fleet under the commands of James Cook a British voyager, arrived at the bay of Sydney and New South Wales. The Australian aboriginal and the Torres Strait Islander people present the original inhabitants of Australia. Despite the harsh climate of Australia, this country remains multicultural and offering a good economical setup. Bit by bit, more and more Britishers settled in Australia. In 1787, around 11 ships with 1530 people on board arrived at Botany Bay and later moved to Port Jackson, where they settled.

This system of foreign arrival and settlement continued for many years and days. The religion of Christianity established its roots amongst the tribes of Australia and resulted in the establishment of several churches. Catholic Britishers also marked their impact on the Australian aboriginal culture and society. Soon, the Australian tribes and colonies were on the mercy of the British. They need British support for the survival and import of goods to their country. Thus, the British invasion of Australia established a powerful influence on society both economically and culturally.

2. Reaction to British Invasion of Australia

The Australian aboriginal people became furious to British colonisation and invasion. Subsequently, they made efforts to reach freedom and this created resistance towards the Britains. They fought against the whites and considered them as their enemy, referring to them as invaders and oppressors. This resistance and unjust oppression of power and dominancy created chaos, starting many racial, social, and economic disputes causing bloodshed and incidents of massacres.

3. 1890s The Era of Light and Hope for the Australians – The Path to Freedom

The British Parliament in the 1800s legally controlled the colonies. Every colony had its own rules and regulations for living and paying taxes. People thought more logically and wanted to unite all the colonies to work for a single cause of freedom as a united nation.

They put this idea into account by sending the colonies representatives to various holdings and conventions, to work and agree on a single page of forming a federation system of Australia. This happened for the sake of the country’s progress and independence. In 1867 and 1880 Sir Henry Parkes projected a Federal Council the British Parliament rejected but finally received a boost in 1883. In 1885 they formed a Federal Council of Australasia to represent the problems and issues faced by the colonies.

4. Hindrances in the Freedom Movement

During the development of the freedom movement, many restrictions, resistances, and doubts arrived. It made people and the leaders of colonies to double think their proposition. Also, their approach towards the Federation of Australia. The major concern remained the distribution of power among the states and the form of government that the federation movement may take. Many other social, political, economic, and religious issues also became a hindrance.

The many efforts of Parkes provided a breakthrough in the shape of the 1890 conference. Parkes gave a historic speech on the 24th October 1889 at Tenterfield, New South Wales. It awakened the true Australian spirit by stating that this is the right time the colonies should start considering the Federation of Australia properly. After this, the leaders of the colonies led a meeting to finalise the federation system of Australia. They held this conference at the Victorian Parliament, Melbourne on the 6th of February. They finalised several discussions, and the conference ended with a positive attitude and spirit towards the Federation of Australia.

Read More: History – Colonisation in the Creation of Australia

6. Constitutional Draft of A. I Clark

Clark put his effort by presenting and writing a constitutional draft of Australia. He approached the British Parliament, presenting this draft on behalf of the Federal Council of Australasia and other Australian colonial councils. The draft stated some major points regarding the Australian constitution, but the document focused only on private matters and never became published.

In 1891, Sir Samuel Griffith edited Clark’s constitutional draft, and officially published and approved the document as Australia’s Constitution. The publication of a draft document remains controversial until today. Some consider Sir Samuel Griffith of Queensland as the principal author and others support Andrew Inglis Clark of Tasmania.

They accomplished the 1901 founding of a nation after the 1899 referendum in which most of the colonies voted in favour and developed an agreement. Finally, on the 5th July 1900, they passed the Commonwealth of Australia Constitution Act and on 9th July 1900, Queen Victoria accepted it.

Based on the constitution, they established an assembly comprising a House of Representatives and the Senate. This included the foundation of High-court and allotment of powers among the federal and state government. They featured the federal system of Australia from both the British and United States system.

The matter of declaring a capital state remained controversial between Sydney and Melbourne. To settle this dispute, they developed a new state within New Wales known as Canberra. They made Sir Edmund Barton the caretaker Prime Minister of Australia. After the 1901 election, they officially elected him again as a Prime Minister.

9. Architecture and Landmarks Associated With The Federation

The history of the independence movement and struggle for rights, identity, and personal values are worth knowing as it makes us grateful for all the benefits we receive in a democratic country.

Scare Flair – Halloween Party Ideas That are Out of This...