7 Reasons Why Australia Will Thrive As A Republic 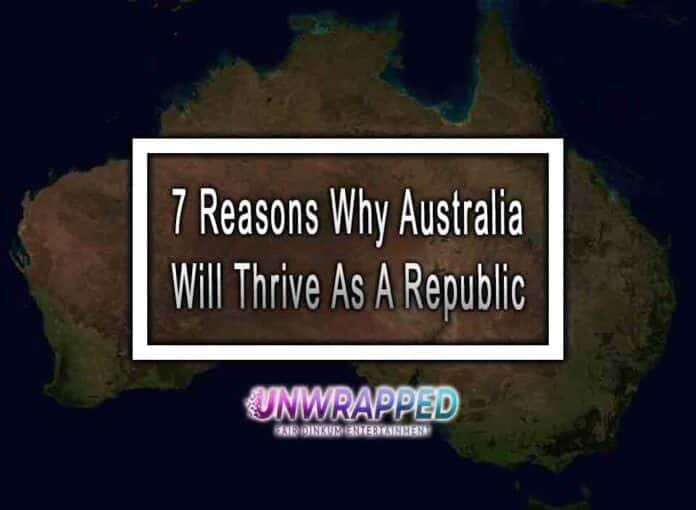 Australia has long been known as one of the most stable democracies in the world. The country has undergone many changes since 1901, when it became an independent nation, but this transition is perhaps its most significant yet.

Australia Will Have its Own Head of State.

One of the most fundamental reasons Australia should become a republic is that it will have its own head of state. A state leader is an individual who represents a country and its people.

In Australia’s case, that person will not be a member of the British royal family (as is currently the case) but rather someone elected by Australians themselves.

This is a significant change because there will be no more confusion about whether Australians are subjects or citizens and no more disputes over which royal lineage we should belong to when traveling abroad.

Instead, we can have our own unifying figure at home and overseas—a representative who reflects all Australian values and beliefs equally well.

Australia will be able to have a solid representation to negotiate for better trade deals and represent itself at international forums.

It would also mean that Australians could represent themselves at future sporting events such as the Commonwealth Games or Olympics – which they cannot do right now due to a constitutional monarchy.

Australia Will Improve on the Secular System of Government.

A secular system of government separates religion from politics. When you vote in Australia, you do not have to choose between candidates based on their religious beliefs or adherence to any religious doctrine.

You can vote for someone because they share your political views and policies, regardless of whether they are Christian, Muslim, or Hindu.

Australia is also a multicultural country, which means that it welcomes people of all nationalities and religions.

The government has made it clear that no one group should dominate the country; instead, everyone should be treated equally under the law regardless of their background or ethnicity.

In addition to being multicultural and secular, Australia also has a democratic government where citizens have the right to vote for representatives who will make decisions on their behalf at both local and national levels.

Democracy allows people born and grew up with Australian values such as mateship (a sense of loyalty towards others), egalitarianism (a belief in equality), and fair play and provides them with an opportunity.

Read More: The Controversy Behind Australia Becoming A Republic

As a Republic, the Australian government will be more transparent. The Australian Electoral Commission (AEC) is a statutory authority formed by an independent act of parliament to oversee federal elections and referendums. Its role is to ensure that all Australians access information about our electoral system and processes.

In addition, some laws protect whistleblowers who reveal possible corruption. Whistleblowers are protected by both common law principles and legislation in most states and territories in Australia.

The law protects whistleblowers who disclose information about a corrupt activity or other law breaches that affect the public interest.

Australia’s current system of government is based on the British model. The head of state is a foreign monarch not elected by the people of Australia.

The only reason they have any authority over us at all is that they symbolically represent our country and its identity as an independent nation-state.

A republic would eliminate this ideological belief in a non-democratic government while eliminating distributive conflict among citizens because everyone would have to buy into the idea that we are free from being forced to submit to someone else’s will due to loyalty or obedience.

Australia is not yet a republic, and our current constitutional system makes it very difficult to change this.

If we want to become a republic, the only way we can do so is by amending our constitution. However, it is unlikely that any major political party would put forward such an amendment because they are all still tied down by their loyalty to the British monarchy and are afraid of losing votes if they were to support something as progressive as republicanism.

One of the most essential parts of democracy is elections. Elected officials are responsible for making laws, creating public policy, and spending taxpayer money. It’s also the only way to change the constitution (the rules that govern our country).

The current system does not allow Australians to vote directly for their president or prime minister—which is one of our system’s most significant problems now. We must make sure everyone has a say in who leads our country.

If we had a direct vote for our president or prime minister, the person with the most votes would win. This would mean everyone’s voice was heard equally, preventing false majorities from forming.

Australia would become more politically engaged as a republic and have more people interested in politics. This would happen because all citizens will be included in electing their head of state, and he or they will be seen to represent all Australians as opposed to just one state like now.

Larger groups within civil societies are expected to become more interested in their governments and their constitution as they see it as no longer an elite club in which only those who live close by can participate.

A republic would be more democratic because all people would have a say in who the head of state is. Only a few hundred people in each state can vote for their governor.

But if Australia were to become a republic, then every citizen over 18 years old would be able to vote for their president.

This would mean that many more people would feel like they had some input into what happens in government, which could increase political participation within Australia.

Keep Reading:  Why Australian Should Become a Republic?

Amendment to a Modern Constitution.

Australia has always been diverse, with people having different perspectives and opinions on how the government should operate.

In the past, this has led to some serious disagreements about what constitutes good governance and society. However, a modern constitution would reflect this diversity by allowing for amendments to be made in line with changing times.

A modern constitution would also benefit the younger generation of ordinary Australians to understand more than our current one. This is because they will be part of the process of amending it.

It would not be written as an ancient document containing archaic language and concepts that have no relevance today; rather, it would be a living document that could be amended as necessary – much like many other countries do.

The Australian republic is a positive move for the country and its citizens and will help eliminate some of the issues plaguing our nation for years.

We have seen what happens when a head of state has no real power, and it would be better if we could avoid this in the future by becoming our own republic.

With all that being said, we must not forget about our past because, without it, there would be no way for us to know where we are going or why these changes are essential today.

5 Needs To Consider When Debating For Or Against An Australian...