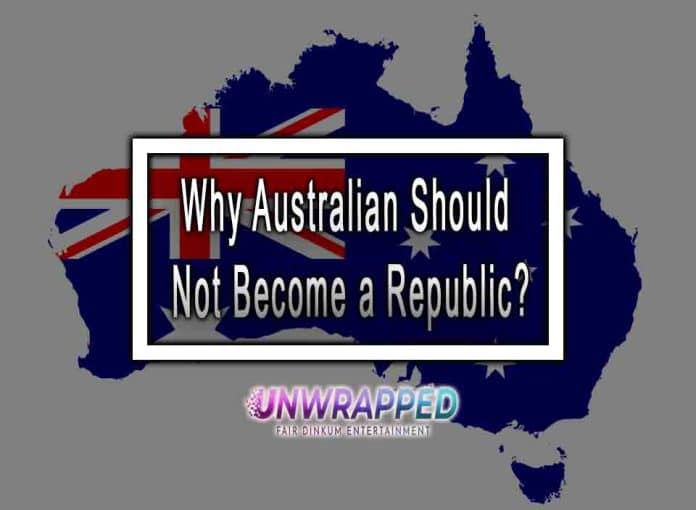 Why Australian Should Not Become a Republic? – Australians have recently been discussing the idea of becoming a republic again. Some people think it is time for Australia to shed its ties with Britain and become an independent nation, while others believe that Australia should stay as a constitutional monarchy. It can be difficult to consider these ideas without being biased by one’s political views, this article discuss why Australian should not become a republic for both sides of the debate.

Australians Have Different Opinions About The Republic

The reason why Australians should not become a Republic is because they are divided on the issue. Australians are not sure what a republic would look like and why it would be necessary. There are also many people who do not know what the benefits of a republic would be.

Some people believe that Australia should become a republic because they think it would improve their country’s image at home and abroad. They think that becoming a Republic will make Australia more respected in the eyes of other countries as well as in its own eyes.

However, other people believe that Australia does not need to change from being a constitutional monarchy to being a republic because there needs to be good reasons for changing something before making changes happen, especially if those changes might cause problems later on down the road like with any major decision.

A Successful Republic Requires A Change To The Constitution

A successful Republic requires a change to the constitution. This is because we live under a constitutional monarchy, and as such, Australia’s head of state is Queen Elizabeth II. The prime minister is appointed by the Governor-General who serves at the pleasure of Her Majesty.

However, if Australia were to become a republic, then our head of state would be elected by majority vote in Parliament the same way our current Prime Minister is elected. Once this happens, we would no longer be part of the Commonwealth and fall under international law as any other nation does; meaning that all countries would have equal standing when dealing with us or speaking with us on matters like trade deals and military alliances.

Republicans Have Failed To Advance Concrete Proposals For A Republic

Republicans have failed to advance concrete proposals for a Republic. Instead, they have generally said that the Royal Family should be replaced with a “President” and that Australia should become fully independent from Britain. Beyond these general statements, there is little else in terms of practical details as to how an Australian Republic might work.

The reason why Republicans haven’t advanced any concrete proposals is because they are afraid of what the people will think if their plans are made public.

The Proposed Changes Would Result In A Weak President

The proposed changes would result in a weak President. This is because the President would not be able to veto legislation, appoint ministers, or appoint judges.

The President would also have no power to dissolve parliament and call an election. If the Prime Minister lost his/her majority then they would remain in office even if they have no support from their own party or anyone else in parliament.

The Proposed Changes Would Cost A Lot Of Money

The cost of changing our constitution is unknown because there are no reliable figures on how much it would actually cost. However, we can look to the United Kingdom for some answers. While the UK has had a referendum on its EU membership and held elections to determine its next Prime Minister, neither of these changes required any amendments to its constitution.

Of course, this figure doesn’t include any costs associated with actually changing Australia’s constitution such as convening a constitutional convention where delegates from across Australia meet and debate before deciding which proposed changes should go forward and how.

Read More: The Controversy Behind Australia Becoming A Republic

People Do Not Want Politicians Making These Decisions

The Australian people do not want politicians making these decisions. As a matter of fact, there is no need for a referendum at all. The best way to decide whether or not we are going to become a republic is through a direct, democratic vote by the people. This is what I call ‘referendum’ – which is basically an online survey that enables the Australian citizens to express their preferences on topics such as who they would like to be our head of state and who should run our country.

This system gives Australians more autonomy in deciding about themselves and their country. It also allows them to voice out their opinion more freely so that we can take better informed decisions when it comes to important issues such as this one sees website.

It Is Not Likely That Australia Will Become A Republic Any Time Soon.

The question of whether Australia should become a republic is a controversial one. Many people in Australia are opposed to the idea, but it is not clear how many Australians actually want to change the current system at all. To begin with, there is no clear majority in favor of this move.

Secondly, most people see other issues as more important than this one. For example, they might think that resolving problems with education or healthcare are more urgent and require more attention than changing the system of government. Thirdly, many Australians are concerned about how much it would cost them if they had to pay higher taxes so that they could have their own flag and president instead of using Britain’s flag and head of state as we do now.

This has led some people who support an Australian republic to ask whether there will ever be enough political will among our politicians to make such changes happen anytime soon – especially given that these proposed changes are not among their priorities right now either.

Also see: Making Australia A Republic May Not Be What You Imagined

We have seen that the Republic of Australia is a better idea than most people think. It is not just an idea for our future, but also an ideal to which we should aspire today. However, the question remains: why do Australians not want to become a republic? We hope that this article has shed a light on why Australia should not be republic.

Keep Reading: Why Australian Should Become a Republic?