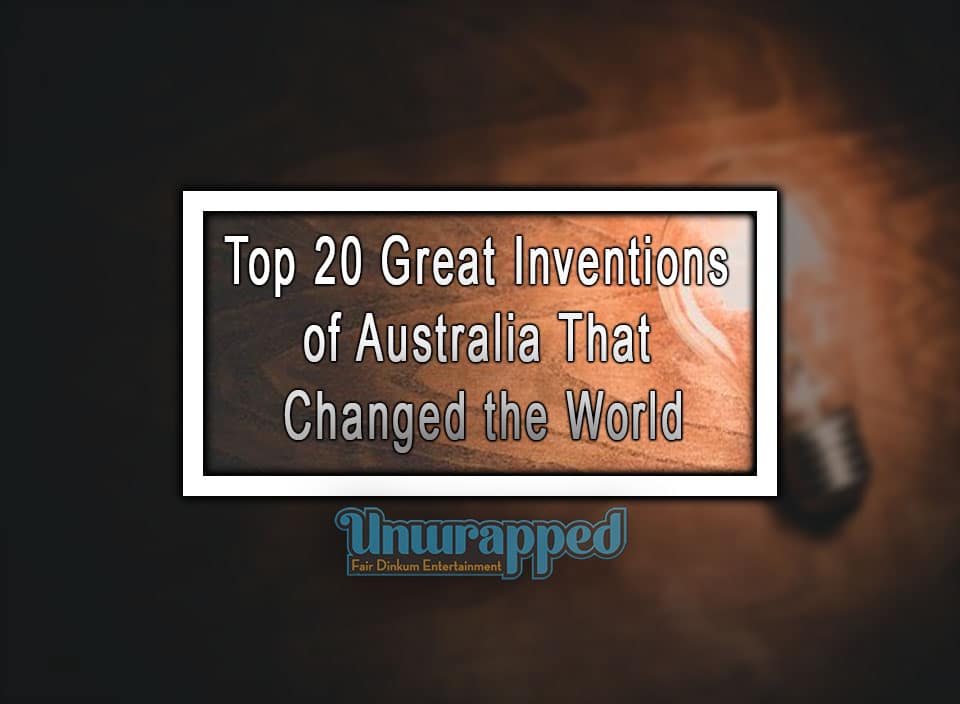 Aussies certainly are an inventive bunch that has played a game-changing part in delivering inventions that changed the world. From modern conveniences to life-saving devices, Australia has punched its weight more than most countries. From the earliest Aboriginal didgeridoos, woomeras and boomerangs, Australia continued with spearheaded innovations that range from penicillin to Google Maps, fridges and electric drills. While there are hundreds of ingenious breakthroughs, we take a look at 20 of the great inventions of Australia that changed and improved the world.

Everybody knows penicillin and it is used around the globe. Interesting to note that this bacterial fighting medicine that certainly changed the world of medicine was developed by the Australian scientist Sir Howard Florey as far back as 1939. It was used during World War II and continued to be used globally. He received a Nobel Prize in Medicine for this discovery to mass-produce penicillin.

Read More: 30 facts you Did Not Know About Australia

Australian scientist, Dr David Warren invented the Black Box after he lost his father in an aircraft tragedy. Dr Warren was part of a Melbourne research team in the 1950s that developed this ingenious, virtually indestructible device that records a crashed plane’s final moments. It records the last sounds and conversations between the crew and was first made compulsory in all Australian aircraft and in later years it became compulsory that every commercial aircraft around the world is fitted with a black box. Incidentally, the Black Box isn’t black but a bright orange which makes it easier to locate in crash-site rubble.

In 2014 Dr Fiona Wood received an Australian Academy of Technology Sciences and Engineering Award for her invention of spray-on-skin. She is a plastic surgeon from Perth that patented her product in 1999. This product was used in the 2002 Bali bombings to treat the burn victims and ultimately saved 28 people’s lives. Her innovation takes healthy skin from a burn victim and grows new skin cells. It has a significant impact on scarring and recovery.

Everybody around the world uses Google Maps but very few know that the platform was developed in the early 2000s in Sydney. Two Danish brothers, Jens and Lars Rasmussen as well as two Australians Stephen Ma and Neil Gordon founded their small company in 2003 and called it Where 2 Technologies. In 2005 Google purchased the company and its four founders and turned it into Google Maps.

The first electric drill in the world was patented in 1889 by two Australian electrical engineers, William Brain and Arthur James Arnot.

Over a billion people around the world use Wi-Fi without knowing that the Australians invented Wi-Fi technology. The CSIRO and John O’ Sullivan developed it in 1992 with the technology being researched since the middle of 1970 for radio astronomy.

In 1926 the world’s first electronic pacemaker was developed by Dr Mark Lidwell, a cardiology pioneer in conjunction with Edgar Booth a Sydney University Physicist.

CSIRO and the Reserve Bank of Australia are behind the development of Polymer banknotes. The rise of counterfeit and forged banknotes in 1968 caused these inventors to incorporate security features that couldn’t be incorporated into traditional paper notes. In 1988, the first-ever plastic banknotes went into circulation in 22 countries around the world.

Australians didn’t become inventive with the advancement of technology and the world wide web. More than 1, 500 years ago the didgeridoo was invented by Indigenous Australians. It is a wooden instrument that is hollowed out by termites and until today it is a popular Australian musical instrument.

Nobody can fathom what they would do without a fridge, but few know that the technology behind modern fridges that are used around the world was invented in the 1850s by James Harrison from Geelong, Victoria. the ether liquid-vapour compression system is used not only in refrigeration systems, but air conditioners as well.

At only 22-years of age, Louis Brennan, a Melbourne mechanical engineer and watchmaker invented an underwater torpedo. This was way back in 1874.

The Australians are behind the world’s first-ever full-length feature film. It was during 1906 and cost only £1000 to make. It was shot by Charles Tait, his wife, brothers and children. The 60-minute film was called The Story of the Kelly Gang.

An Adelaide company developed plastic spectacle lenses in the 1950s which were scratch-proof, 60% lighter, safer and less expensive compared to glass lenses.

Australia is behind the indispensable ultrasound machine in 1961. The inventors are David Robinson and George Kossof who were in the employ of the Department of Health.

Bionic ears are better known as hearing aids or cochlear implants. It amplifies sound for patients that are hard of hearing. In 1970 at the University of Melbourne, Professor Graeme Clark started the development. The first patient was fitted with a bionic ear in 1978.

The most basic piece of plumbing in the world, the toilet uses a lot of water. Well, that was before the Australians jumped onto the invention wagon again. In 1980, the dual flush toilet was designed by Bruce Thompson of Caroma that saves 67% of household toilet water use which also amounts to 32, 000 litres of water per year.

The top washing liquid for wool, Softly® which you see in supemarkets globally has been developed in the 1960s by a scientist Tom Pressley and the Royal Melbourne Hospitals Linen Service. It is specially developed to kill bacteria in wool without shrinking the wool products.

Australia is yet again at the forefront of one of the world’s most important vaccines for women. Ian Frazer from Queensland University developed the vaccines which have proved to reduce virus infection by 90%.

Not only is Australia responsible for the black box but also ensure safe emergency exit from aircraft. In 1965, Jack Grant, the operations safety superintendent for Australia’s Qantas Airline, developed the slide raft that gives passengers an easy and safe method to slip off a plane during emergencies. In 1975, Grant received a Cumberwatch Trophy from the Air Pilots and Air Navigators Guild.

If it was possible to calculate the amount of clothing that has dried on these ingenious clothing hoists or the number of kids that have swung from them, you would be a millionaire. Everywhere in the world, you see one of these rotary clothes hoists especially in Australia. In 1911 the first rotary clothes hoist was patented from inventor Gilbert Toyne of Adelaide.

There is no denying that Australians are a bright lot when you look at the list here that is a mere drop in the bucket of inventions. Each of the game-changing inventions has an impact on people around the globe. That is without including the yummy Vegemite, the modern-day wine cask, Staysharp knife or the 1934 Ute.