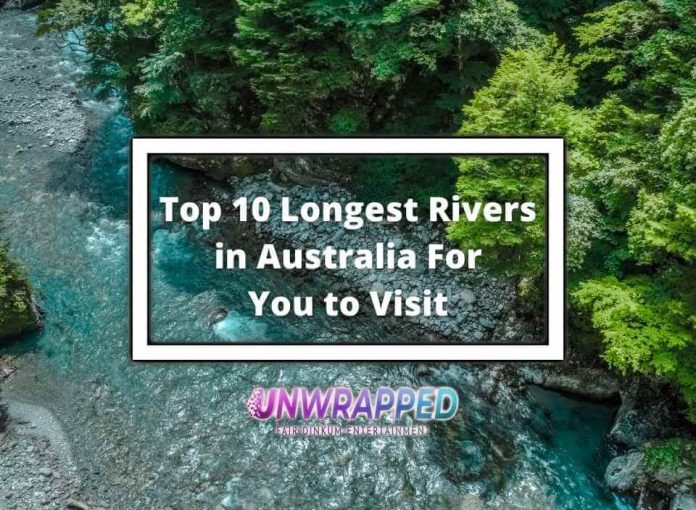 Australia’s rivers have been immensely important and vital to the survival of humans and animals. Throughout the centuries it played a vital role to indigenous communities and in modern-day Australia, it continues to play cultural, ecological, social and economic roles.
Australia is not well-known for its rivers, however, some of the world’s most significant rivers are located here.

The Longest Rivers in Australia to Include in Your 2023 Visit

Australia’s longest river runs from East to West throughout the country, and many people use it for transportation and irrigation. In the early 1800s, steamboats started ferrying people and goods up and down the river, as other boats did not have sufficient access to the river.

This is because the river doesn’t have an estuary, meaning that its opening at the ocean is too shallow for significant sea vessels to enter from there. So, one of the solutions river farers came up with was to have their boat moved by road and then launched into the river at a more suitable spot.

In recent years, most river traffic has been recreational, although some people still use the river water for agriculture. Sailing down such a vast river brings a nostalgic feel to the trip, so make sure to discover this beautiful Australian gem.

Murrumbidgee means big water in the Aboriginal culture and for thousands of years, this river was the livelihood of the Wiradjuri nation with the abundance of mussels, crayfish and fish in the river. Wildlife in the area includes wildfowl, turkeys, bandicoots, emus and kangaroos.
In 1832 the Wagga Wagga city was established on the south bank of the river and it extended across the river to North Wagga Wagga. The river rises 32 km north of Kiandra and flows southeast before making a fishhook bend and flows northward through the Australian Capital Territory.
It bends yet again to flow westward between Balranald and Maude it is joined by the Lachlan. 140 miles from the Victorian border it joins the Murray River.

The Darling River starts in New South Wales and flows in the Murray River in Wentworth. It is the most important waterway of the outback. A lot of the Darling River runs through saltbush pastures and due to lack of rain often lose more water due to evaporation that is gained by rainfall. Tourists that want to visit the longest rivers in Australia in 202 will be in for a surprise as the Darling River which was under threat are flowing again as reported in May 2019.
The Darling – Murray Basin has been drying for quite some time and if the dry condition continues to persist the Darling river definitely will not remain on the longest river list in 2023. It will be a sad day to see one of the longest rivers in Australia dry up. Unfortunately, climate change and changing rainfall patterns worldwide contribute to the changing ecosystem, making it even more essential to take care of the environment.

The chief tributary of the Murrumbidgee River is the Lachlan River. Eight miles east of Gunning it rises in the eastern highlands and flows northwest and 48 kilometres from Cowra it dams up to form the Wyangala Reservoir. It continues past Forbes before it turns southwest past Lake Cargelligo before it joins Murrumbidgee.
The mainstream of the Lachlan River is around 1, 448 km long but during severe drought, it may run dry. The Lachlan supports both sheep and wheat farming. The headwaters are on the Breadalbane Plane with the eastern ends having elevations of up to 1, 400 metres.

The Warrego River is south-west of Queensland in New South Wales’ Orana region. It is the Darling River’s northernmost tributary. The river rises in the Carnarvon Range below Mount Ka Ka Mundi and flows south to reach its confluence downstream from Bourke to connect with the Darling River.
Thirty-seven tributaries join this river and it also flows through numerous reservoirs like the Boera Dam, Turtle Waterhole, Six Mile Dam, Lower Lila Dam, Ten Mile Waterhole and the Dillalah Waterhole. The riverbanks also have several towns along its banks including Cunnamulla, Wyandra, Charleville and Augathella.

Cooper Creek is also known as Barcoo River is one of Queensland’s three top river systems. It flows into Lake Eyre with the majority of its waters coming from monsoonal rains. Cooper Creek starts as two rivers west of the Great Dividing Range and it spreads out as vast channels before making its way to Queensland’s far south-west before turning into South Australia towards Lake Eyre.

This river could be the most well-known in Australia, mainly because it was part of the tragic passing of two explorers, Robert O’Hara Burke and William John Wills, during an expedition. Going down the river, visitors can view the ‘Dig Tree’ located near the Bullah Bullah Waterhole on Cooper Creek and see the carvings these explorers left on it as a reminder of their camp set-up in the area.

Paroo River is a series of wetlands, lakes and waterholes and only in wet years will it join the Darling River. The catchment of the river is in the Murray-Darling Basin’s northwest corner with half of it in New South Wales and the other half in Queensland.
The river starts west of Charleville in the Warrego Range and flows across semi-arid plains from the range county. It ends south of Wanaaring in New South Wales’s top north-west corner. When rains fall and in very wet years it is the only time that the Paroo River will flow all the way to reach Darling River.
The river is fringed with gidgee and eucalypt with the predominant species being poplar box, coolabah and red gum.

At 1004 kilometres Flinders River is Queensland’s longest river with a mostly undeveloped and sparsely populated catchment. It rises on the Gregory Range’s southwestern slopes 160 kilometres west of Charters Towers.
Then it flows westward towards Hughenden and past Richmond. The river curves to enter the Gulf of Carpentaria. Flinders River was in the news in 2019 when floods caused it to go from a thin river to a river reaching 60 kilometres wide during floods in northeast Australia.

The Diamantina River in Channel Country rises northwest of Longreach in Kirby’s Range and only flows seasonally past Birdsville to South Australia’s Goyder Lagoon. Here it drains in a basin of 158, 000 square kilometres.
During a flood, the Georgina River and the Diamantina merge and grain along Warburton Creek to Lake Eyre. The principal tributaries of the Diamantina are the Mayne and Western Rivers

Western Australia’s longest river is the Gascoyne and its source comes from the Robinsons Ranges west of the Gibson Desert it only flows for around 120 days per year. One of the country’s worst disasters was in 2010 when the Gascoyne River flood was triggered by severe rainfall causing major damage in the region.

While these are our list of the top ten longest rivers in Australia, keep in mind that our vast country has an abundance of rivers even though they might not all stretch hundreds of kilometres. Just think about the Ord River in the Kimberley region in Western Australia, the extraordinary Yarra River in Melbourne, the Daintree River within Queensland’s wet tropics, the Swan River and so many more and plan your 2023 Australian trip to include some of our top rivers.