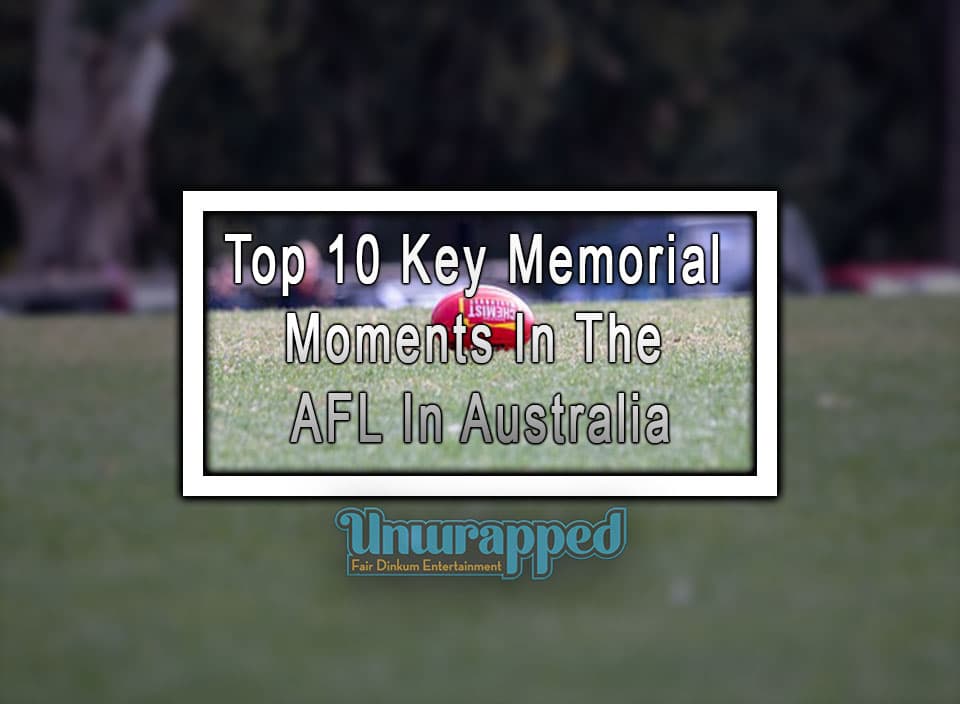 Footy Fest: The Top Historic Moments of The AFL

Ask any Australian about footy and you might just earn yourself a few hours of intense discussion about football, one of the country’s most favourite sports. First played in the mid-1800s, footy, or Australian football used to be held on rectangular grounds. It spread to other states in the 1870s. At the start of the new century, the Australasian Football Council was formed as the governing body of football. The game was called the Australasian Game of Football and was later changed to Australian Football. Many rules were implemented, from the point system, to how to calculate scoring percentages, to the use of the ladder and round-robin systems to determine the top teams. The history of the Australian Football League (AFL) is rife with changes that made the game more professional for the players and umpires and easier to enjoy for the spectators. Many instances showed the athleticism, emotions, and passion of all involved, and here we have compiled the top historic moments of the AFL that made it to the books of this well-loved sport.

The first documented football game is the match between Scotch College and Melbourne Grammar School in 1858. Played under crude conditions with experimental rules, each team assigned one of their members as umpires. The game was held on August 7 and ran for three consecutive Saturdays, ending in a 1-1 draw after the third day. This historic match is believed to have played a major role in the origins of Australian football. To celebrate the key contribution of the Melbourne-Scotch game, the Cordner–Eggleston Cup was instituted in 1989. Since the first game in 1858, the competition has been held annually between the two schools, giving them a claim to being the longest-held competition that has continuously been running.

2. Formation of the Victorian Football Association in 1877

The sport developed and became famous in the 1860s, with more clubs being formed and matches held in competitions known as Challenge Cups. The need to have a more structured environment to lessen the friction among clubs and to have a governing body to oversee the competition. This led to the formation of the Victorian Football Association. The VFA pioneered concepts that were adopted by future leagues. This is where the interstate football competition was established, following a ladder system for the ranking, the fixturing and the use of boundary umpires. The VFA faced challenges because of the lack of standard fixturing that had many teams frustrated. This culminated in the split of 1897, with the top teams of the Association breaking away to form their own league.

3. Establishment of the Victorian Football League in 1897

Amidst controversies in the VFA, six of its top teams decided to break away on October 1896 and form the Victorian Football League. This is one of the top historic moments of the AFL as this became the foundation of modern Australian football that we know today. The six clubs that started the VFL were South Melbourne, Geelong, Melbourne, Essendon, Fitzroy, and Collingwood. The clubs invited St. Kilda and Carlton, a former powerhouse in the VFA, to join them. The League soon established itself as a dominant football body and with the addition of former VFA club Richmond and former Metropolitan Junior FA in 1908, expanded the VFL to 10 teams. However, this was not sustained because of World War I. While the VFA ceased to have competitions for a couple of seasons, the VFL continued to do so under duress. The University club did not continue after 1914 and in 1916, only four of the remaining nine clubs continued to play. After the war, more teams from the VFA transferred to the VFL, further strengthening its hold on Victorian football.

4. The Founding of the Australian Football League in 1990

Until 1987, the VFL was composed of 12 teams. When the West Coast Eagles and the Brisbane Bears were added in 1987, it expanded the League into a fourteen-club competition from different parts of the country, a historic moment for the AFL. The VFL was renamed as the Australian Football League in 1990. In the following years, several more teams from mainland Australia were added until this became an eighteen-club competition in 2012. Today, championship games known as premiership matches are played not just on the mainland but also in the Northern Territories, Tasmania, and the Australian Capital Territory. Premiership matches have evolved from suburban rivalries with hundreds of fans trooping to final games into national events that draw in tens of thousands of spectators supporting their clubs.

5. Last Quarter Five Goals of Darren Jarman in the 1997 Final

In talking about the top historic moments of the AFL, we have to include the memorable premiership matches in televised history. On September 27, 1997, the Melbourne Cricket Ground (MCG) saw one of the most memorable moments in the history of the AFL. Played between the St Kilda Football Club (St. Kilda Saints) and the Adelaide Football Club (Adelaide Crows), it was attended by over 99,000 spectators and marked the first premiership victory by the Crows. The Adelaide club started the exciting game well, leading the first quarter. By the end of the second term, St. Kilda had the lead. The Crows got the lead back by the end of the third before taking control of the last term. Several players contributed to what will be a 31-point win over the Saints, but it was Darren Jarman who rose to the occasion on the last term. He scored 5 of his 6 goals in the fourth, sealing the premiership for the Crows.

In what is to be the coldest played premier match of the AFL, the game can be said to have been won in the last five minutes of the competition. The game was exciting, with several lead changes, closeness of the scores, the physicality of the game, and the contribution of several players who competed brilliantly for their teams. The first three quarters were low-scoring due to several stoppages that left little opportunity for either team to score. The wet grounds brought by the rains the previous night with some heavy showers during the game may have contributed to the rough conditions but St. Kilda was ahead after three quarters. It was in the last term at the 24-minute mark that the tables turned for the Cats. Zac Dawson of St. Kilda spoiled a kick, and it went to Geelong’s defender Matthew Scarlett. He then toe-poked the ball to teammate Gary Ablett who continued running forward. Ablett was able to pass it to midfielder Paul Chapman who was able to score the winning goal with only a 12-point advantage. The Geelong Cats became the first team who got the premiership after being down for the first three quarters.

On paper, this was a game that the Hawks should have won. They were ahead in most categories and were judged to be the season’s best team coming into the premiership match. The final game was intense, with six lead changes that sent the more than 99,000 fans into a frenzy after each goal. The Hawks threatened to break away with a wide margin but the Swans regrouped and were able to step up their defence. When Sydney came back to snatch the lead, the Hawks will display their kind of football wizardry and get the lead again. Hawthorn was looking poised to win the premiership, with several Sydney players bothered by pains brought by the physical game. But with only two minutes left and ahead by seven points, the ball found Nick Malceski of Sydney who snapped at about 25 meters. The last goal of Malceski who also scored the club’s first goal of the game sealed the premiership for Sydney.

In what is to be an unforgettable premiership match between the Sydney Swans and the Western Bulldogs, Tom Boyd emerged as the hero during the last quarter, delivering the second championship in the club’s history. The game was still up for grabs during the fourth term. The Bulldogs were led by nine points but a comeback for the Swans is still within reach. Lance Franklin, the superstar of the Swans, had the ball but Bulldogs Dale Morris stepped up the defence, catching Franklin who lost the possession. Boyd got the ball and after some quick steps, kicked from the centre square. The ball lobbied through after bouncing on the goalsquare. Boyd’s goal turned the game around. Five minutes before the game ended, Bulldogs teammate Liam Picken kicked another goal and sealed the premiership for their team.

The 2017 season started rough for the Richmond Tigers. They were 13th in the ranks but emerged as the premiers at the end of the season. The stunning comeback of the Tigers during this season is thanks to the defensive pressure adopted by the team under its coach Damien Hardwick. The premiership was a battle between Richmond, the best defensive team, and the Adelaide Crows, the best offensive club. The Tigers stunned the Crows, and the whole AFL for that matter, for holding the Adelaide club to only 60 points. This was the lowest production of the Crows for the whole 2017 season. Dustin Martin of the Tigers became the first player in the AFL history to get both the Brownlow and Norm Smith medals in the same year, giving an ode to his season-long noteworthy performance. The jump of the Richmond Tigers from 13th to the premiership is the biggest jump in the history of the League.

The establishment of the Women’s League has been a long time in the making. It was in 1915 when the first football game between women was played. As early as the 1920s, teams were already established and competitions between these state teams were also held. Women’s football continued through the Second World War, and soon, celebrities from the VFL were hosting or were playing umpire for women matches. It was only in 2010 when the AFL commissioned a team to review women’s football. After decades of clamour for women to be professionally playing the game, an exhibition match was held in 2013 between the Western Bulldogs and Melbourne, marking the first time that AFL clubs were represented by women. In what will undoubtedly be one of the most significant moments in the history of AFL, eight clubs were awarded in 2016 the license to participate in the AFL Women’s League that will start in 2017. After almost a century of playing, women were finally given their rightful place in the history of Australian football.

Football is embedded in the life of Australians. The game is followed by hundreds of spectators not only for their pride for their teams but more so for the sportsmanship and respect for the game that each player displays when they step on the playing field. The top historic moments of the AFL mark important moments in the country’s history as well. From the first game played in the country to the different historic finals moments, to the year when women were finally welcomed wholeheartedly in the sport with a league of their own, the Australian Football League continues to evolve. We can only expect more brilliant displays of athleticism and more defining moments for AFL in the years to come.