Skip to content
You are here:Home / 10 Most Important Australian Celebrations in 2020 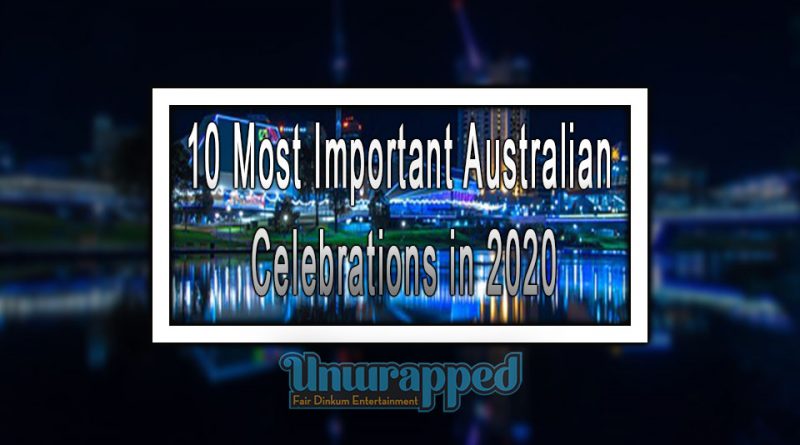 10 Days of Festivities in Australia

Australia is a land of multi-cultured people who are as lively, vibrant and dynamic as the country itself. Aussies are unbeatable when it comes to enjoyment and festivities. These people savour, relish and rejoice every moment and every day and if we talk about special days, then the zeal and fervour of Aussies are completely matchless. Like the rest of the world, Australia observes national holidays in the remembrance of some important people, to mark some significant happening occurred on the day or as a tradition set ages ago. If you want to learn more about Australian traditions, observances and holidays read this article till the end and learn what to do on Australian holidays in 2020.

January the first brings with it a sense of joy, pleasure, and happiness as everyone resolves to be his better self, to be more considerate and kind, to fulfil his duties more passionately and with greater determination. As this new chapter of life unfolds, the celebrations begin all across the globe. Australia is among the few countries to first welcome the New Year due to its geographical closeness to the International Date Line. The country observes a public holiday on New Year’s Day and most of the businesses, academic institutions, and state-owned projects are closed. You will see a spectacular display of 80000 fireworks at Sydney Harbour Bridge on New Year’s Eve where more than a million people gather to embrace the coming year. Aussies take the lead when it comes to celebrations. Friends and families come out on streets to become a part of the smaller celebrations. With great zeal and fervour, they toast along the beaches, in pubs and clubs, in cinemas and eateries. New Year concerts and hip-hop parties are thrown at every place to make the day a memorable one.

The anniversary of the first arrival of a convoy of 11 ships carrying criminals, at Port Jackson in 1788, is commemorated as the Australia Day. Celebrated on January 26th, Australia Day is all about acknowledging and appreciating the contribution of every Aussie towards making the country a vigorous, modern and lively place to live. People take a day off from work to cherish everything of Australia from its land, resources, and democracy to lifestyle, sports, music, and food. The day is celebrated differently in different states. The coastal capital Adelaide holds a parade and cricket match and the people rejoice with fireworks and concert. Sydney prefers more maritime celebrations and organizes different boat races. Festive ceremonies to welcome immigrants are often held on the Day. Some commonly used symbols on this public holiday include Commonwealth Star, five stars of the Southern Cross, Golden Wattle (Australia’s national floral emblem) and Opal (Australia’s national gemstone). There is a common display of green and gold which are Australia’s national colours and you will commonly hear “Waltzing Matilda”, the unofficial anthem on Australia Day.

On this day, Christians commemorate the crucifixion of Jesus Christ and just like many other countries, Good Friday is observed as a national and religious holiday in Australia. Businesses, schools, and offices are closed on this day. From divine lens, Good Friday is a fast day in some churches, some eat only three minor meals and no meat and some replace meat with fish. Long prayers are also observed in some churches. Christians hold the day sacred as crucifixion and renaissance of Jesus Christ are principal happenings in Christian beliefs. In Australia, Good Friday will fall on 10 April in 2020 and it marks the beginning of four-day long holy weekend just along with Easter holidays. It is a great opportunity to spend time with friends and family as many people take vacations to travel to popular tourists’ destinations. Brisbane to Gladstone yacht race, Tasmania’s Three Peaks Race and Sydney’s Easter Racing Carnival are the most famous sporting events that start on Good Friday. A major feast and a symbol of this day is hot cross bun which is widely served and eaten during the day.

On this day, Christians commemorate the crucifixion of Jesus Christ and just like many other countries, Good Friday is observed as a national and religious holiday in Australia. Businesses, schools, and offices are closed on this day. From divine lens, Good Friday is a fast day in some churches, some eat only three minor meals and no meat and some replace meat with fish. Long prayers are also observed in some churches. Christians hold the day sacred as crucifixion and renaissance of Jesus Christ are principal happenings in Christian beliefs. In Australia, Good Friday will fall on 10 April in 2020 and it marks the beginning of four-day long holy weekend just along with Easter holidays. It is a great opportunity to spend time with friends and family as many people take vacations to travel to popular tourists’ destinations. Brisbane to Gladstone yacht race, Tasmania’s Three Peaks Race and Sydney’s Easter Racing Carnival are the most famous sporting events that start on Good Friday. A major feast and a symbol of this day is hot cross bun which is widely served and eaten during the day.

In Christian beliefs, Easter is celebrated as the day of resurrection of the Jesus Christ. Easter Monday is celebrated throughout Australia as a public holiday. Many of the Easter symbols and traditions have roots in pagan celebrations. Aussies spend this public holiday with family at home, hanging out with friends or relishing the different state-held events and concerts. Easter Monday marks the end of many music festivals as well as sporting events. Byron Bay East Coast Blues and Roots Bluesfest, National Folk Festival, Australian Gospel Festival, Stawell Easter Gift athletics competition, Easter Racing Carnival (Sydney), yacht race from Brisbane to Gladstone, Three Peaks Race, and many other local events close with the ending of Easter festival. Easter is a much-awaited fiesta for children due to its non-religious tradition of Easter eggs and the Easter bunny which brings candies and chocolate eggs for the kids in Easter baskets. In recent years, the Easter bunny has been replaced by Easter Bilby in an effort to save the cute little Australian native mammal Bilby from extinction.

Australian and New Zealand Army Corps (AZNAC) Day is the national day of remembrance of military personnel who served in the wars and sacrificed their lives in battles, conflicts, and other peacekeeping actions. On this day, Australian and New Zealander troops landed on Gallipoli Peninsula in Turkey during the WWI. It is celebrated on April 25 all across Australia. It is generally observed as a public holiday though some businesses run their operations normally. Church services and dawn prayers are an integral part of this day which symbolizes the camaraderie experienced by soldiers as they prepared themselves each morning for military action. Marches and parades along with memorial services are held in major towns and cities all across the country. The verses of the well-famed poem “The Ode” are read out loud at many reunions.

Jingle bells, jingle bells, jingle all the way! What does it bring to your mind? Reindeer, Santa Claus, Mistletoe, tinsel and of course, Christmas! Just like the whole world, the Aussies celebrate the birth of Jesus Christ on December 25. It is an occasion of festivities, merriment, joy, and enjoyment. Many non-Christian Aussie follow the tradition of giving presents, concocting special cuisine and decorating their homes. This day falls in the middle of summer vacations and both 25 and 26 December are observed as holidays. It is that time of the year when people relax and mostly celebrate with relatives and friends away from home. Apart from usual Christmas decorations which are common in Europe and consist of Christmas tree, small lights or candles, snowmen, and fake snow, Australians decorate their homes with wooden ornaments decorated with pictures of Australian wildlife or landmarks. Native Australian animals dressed in Santa Claus costume and sleds pulled by six white kangaroos are the common item of décor at Christmas in Australia. Children anticipate receiving gifts from mythical Santa Claus whereas, adults roast meat and vegetables and bake fruit cakes and prepare steamed pudding with a coin inside. Whosoever finds the coin is considered to be the fortunate one.

The Christmas holiday is followed by Boxing Day which is also a public holiday on which most of the businesses and schools are closed. The tradition of celebrating Boxing Day has its roots in England where employers used to give bonuses, leftovers and used clothes to their employees in a box. But others believe that relates to the box into which worshippers put church contributions and the box was opened on Boxing Day to distribute the contents to poor communities. Aussies celebrate the day by enjoying the various sporting events such as Boxing Day test match held at Melbourne Cricket Ground. Another spectacular event held on this day is the yacht race from Sydney Harbour to Hobart on Tasmanian Island. The most important attraction for the people who love shopping is that post-Christmas sales begin on this day where items are available at cheap rates.

Australia holds membership of Commonwealth of Nations. The official head of state, presently Queen Elizabeth II, is Monarch of the Realms. The Commonwealth nations including Australia celebrate the birthday of the Monarch in June though the Queen was born on 21 April 1926. This Day is observed as a public holiday on the second Monday of June in twelve Australian territories through the date differs across states. Aussies take it as an opportunity to visit and meet their relatives living far away. You can also set off fireworks on Saturday, Sunday and Monday of Queen’s Birthday weekend in Australia. Some sports events such as Australian Football League are also held on this Day.

Australians annually observe St Patrick’s Day on March 17 to pay tribute to Saint Patrick of Ireland. On this day, Aussies honour Irish culture and commemorate the life and achievements of Saint Patrick. Businesses remain open on this day to serve special breakfasts and other meals of the day and serve Irish food and green coloured beverages. St Patrick’s Day parties are held in the evening where local musicians play Irish music. Sydney and Brisbane also hold special parades where people dressed in traditional Irish attire and waving Irish flag march through the streets. Some people prefer to wear green wigs and a symbol of Ireland such as shamrock or harp-shaped brooch.

Trick or Treat? October the thirty-first marks All Hallows’ Eve or Halloween which originated from ancient Celtic harvest festival Samhain. The festivities attract children and teenagers as they wear themed costumes and go door to door tricking-or-treating. Although not a public holiday but people generally take an off from work as the trend of this festival is increasing in Australia. Some themed parties are held at haunted places. People decorate their homes with pumpkins, jack-o-lanterns, fake cobwebs, spiders, images of black cats and witches. The day is associated with many symbols such as bats, spiders, black cats, and skeletons.

The Land Down Under has some flamboyant ways of commemorating important days. Besides, outdoor activities, Aussies ensure to make the best of these holidays by throwing parties, baking mouth-watering cakes, cooking lip-smacking cuisines, relishing at friends’ homes and decorating every nook and corner of their houses. 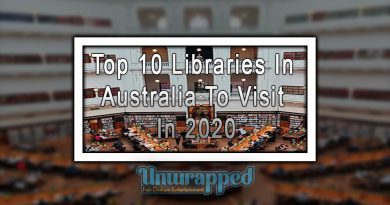