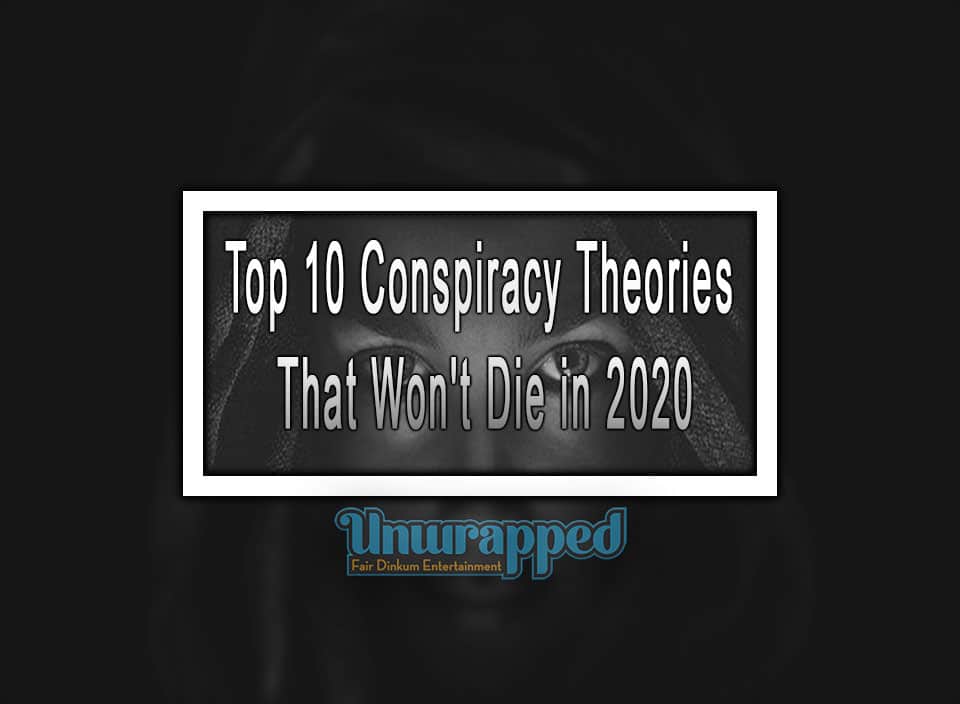 Before we dive into the top 10 conspiracy theories that won’t die, let us define conspiracy theories. In essence, it is a belief that a group of individuals are collaborating in secret against the common good. This includes an attempt to hide a consequential or deadly secret, to seize power, to effect a change in society, to create harm, or change history.

One of the most devastating events is the tragedy on September 11, 2001. Who can forget the horrific images of two planes crashing int the Twin Towers in Manhattan’s World Trade Center? There are alternating theories of why it happened, but the widely accepted account was that Osama Bin Laden was indeed behind it. However, it is also theorized that it happened because the Bush administration wanted to go to war in the Middle East. An abundance of unanswered questions like why the military failed to intercept the planes? Was there a “stand-down” order so that the government could blame Islamic terrorist? Another theory was that the jet fuel wasn’t enough to melt the Twin Tower’s steel beams, but that a controlled demolition has brought the World Trade Center Towers down when the planes which were an orchestration of the US itself crashed into the buildings.

Four decades after Neil Armstrong set foot on the moon, there are still hordes of people that are non-believers. Conspiracy theorists say it is the US government’s desperate attempt to be the first in the space race that faked the landings. It is theorized that the mission was filmed secretly, and that renowned filmmaker Stanley Kubrick had a hand in it. He was after all the producer of A Space Odessey in1968, that is proof that it was possible to create an artificial space set. Besides, the three astronauts that died in a fire during a test for the first moon mission, are believed to have been assassinated by the US government in order to keep the truth hidden.

We know that on November 22, 1963, President John F. Kennedy was assassinated when riding in an open-topped limo. However, even though Lee Harvey Oswald was found to have acted alone, 70% of the American nation believes that Kennedy’s death was the result of a conspiracy. Speculation over one of the most famous political assassinations in history includes a KGB plot, mobsters that wanted to act out against Kennedy’s brother for the initiation of organized crime ring prosecution and CIA involvement. The trajectory of the bullets didn’t square with the sixth-floor perch of Oswald and a second gunman theory persists.

The Big Pharma and FDA conspiracy reasoning are that they are withholding a cancer cure in order to continue making millions by selling cancer treatment. A cure, after all, would be detrimental for drug companies aside from the fact that thousands of researchers and doctors would be out of business. While it is a popular conspiracy theory, logic tells you that thousands of people would be involved in such a major cover-up and somewhere along the line someone would have slipped such a massive secret.

The death of Princess Diana in Paris in 1997, was an assassination and not an accident. That is how the theory rings even though experts and numerous investigations agreed that the negligent driving of Henri Paul, her chauffeur caused the tragedy. Conspiracists, however, believe that the British State carried out a hit. The father of Dodi al-Fayed, Mohamed al-Fayed claimed that as the mother of the future king, Diana had to be killed to prevent her from having a child with a Muslim. New polls found that six out of ten of the French public and 38% of the British nation continue to believe that Diana was assassinated.

Even though the US military dismissed the theory that an alien spacecraft landed in Roswell in 1947 but rather a weather balloon, Ufologists and conspiracists believe otherwise. The location in New Mexico where several top-secret aircraft and the U-2 spy plane were developed and tested, is a heavily guarded military base. It is called Area 51, which is a secretive division of Edwards Air Force Base. The theory is that the US government is continuously researching alien life forms and technology at Area 51.

A famed conspiracy theory is that the world is controlled by secret societies. The Illuminate that originated in Germany in the 18th century is allegedly also behind the one-dollar bill pyramid and eye symbol. The Illuminate is linked to JFK’s assassination, the 9/11 terror attacks as well as the “faked” moon landings. This group of Illuminate today is made up of high-profile celebrities, business moguls, bankers, and politicians. On the extreme end as you will see further down is also the theory that reptiles are in control of humanity. Even the formers Canadian defence minister, Paul Hellyer claimed the Illuminati is indeed REAL.

When HIV/AIDS were first reported in 1981, conspirators spread the theory that the CIA is behind the deadly virus. A number of high-profile believers including the South African President touted this theory. Believers dispute scientific proof that AIDs originated in Africa. The US government are accused of manipulating the truth that this virus was indeed scientifically manufactured in US labs. In particular, is the CIA rumoured to be behind HIV/AIDS. Another high-profile believer is the Kenyan ecologist, Wangari Maathai who said when she won her Nobel Peace Prize, that she also supports the same theory. It is believed that Aids was created to wipe out African Americans and homosexuals.

Certainly, one of the more humorous is the notion that there is shape-shifting flesh-eating, blood-drinking reptilian humanoids in control of the human race. Some people certainly live in a fantasy world to believe that our corporate leaders, executives, famous actors and singers are cold-blooded reptiles. David Icke published a book in 1998, The Biggest Secret, where he claims that the royal family, in particular, Prince Charles is indeed a Vampire. Icke is a New Age Philosopher and conspiracy theorist claims that these reptiles which he calls Annunaki, have been in control since ancient times. Other reptiles that he named include Bob Hope, Henry Kissinger, George W. Bush and Queen Elizabeth. The queen remains “young” as she drinks human blood and flesh. He continues to claim that the lizards are behind the Illuminati and the Freemasons too. He published several books on the subject with his latest work called, The David Icke Guide to the Global Conspiracy.

It is simply too fantastic to believe that a handful of people could go to such extremes as to place a fake person in the place of a dead one. This is how the Paul McCartney theory goes, he never fathered his children, he never formed a band called Wings, he never wrote any award-winning songs. Neither did Queen Elizabeth knighted him either, he was dead, she knighted an imposter. The theory is that Paul McCartney died in a car accident in 1966. According to theorists, have the Beatles covered up his passing. They hired a person that sang and looked like him. When you listen to their music, you will find the hidden truth, or so they claim. Paul’s replacement that took his place is Billy Shears. Believers point out to various clues that are proof of his death which they picked up through song lyrics.
Read More: What Not to Do in Australia

If you thought it is only the evolution of the internet that sparked conspiracy theories, it is not true. One of the oldest conspiracy theories is that the Virgin Mary was not Jesus’ mother, but his wife. It is interesting to take note that studies done at Frostburg State University based on critical thinking, is that accepting an unsubstantiated claim, endorsing paranormal claims, psychological misconceptions, conspiracy theories and pseudoscience represents the failure to think critically. Nevertheless, reading about wild claims and conspiracy theories in a confusing world where people try to find order, remains interesting and demands a chuckle when you envision people sitting around the holiday dinner table sharing their thoughts.