The Stevie Wonder Story On 07-09-2022 At Torrensville SA, Thebarton Theatre 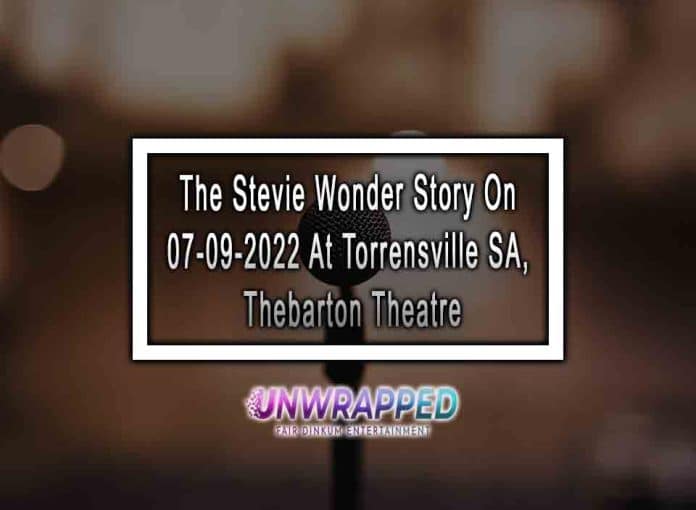 In September 2022, Thebarton Theatre will host the world’s finest Stevie Wonder show. Classic Stevie Wonder songs, including Superstition, Sir Duke, Higher Ground, Master Blaster, and Signed Sealed Delivered, along with a cinematic trip through the cultural revolutions for which Stevie’s music formed the soundtrack, are all featured in this film. On this remarkable lineup, which includes a complete 9-piece band, you’ll find musicians and vocalists with global touring and studio recording credentials.

Including everyone from Stevie Wonder to Beyonce to Grace Jones to Amy Winehouse to Alicia Keys to Pharrell Williams to Annie Lennox to Tina Turner to Aretha Franklin.  As a group, the band members have performed in some of the world’s most prestigious venues, such as the Sydney Opera House and Wembley Stadium, as well as the Hollywood Bowl. With Philly-style horns, a rhythm section with full percussion, and exceptional supporting vocals, this magnificently rich musical and visual feast will enthrall, arouse, and dance in the aisles to the songs, the soul, and a narrative of the times.

Stevland Hardaway Morris (born 13 May 1950), better known by his stage name Stevie Wonder, is an American singer and musician who has influenced performers in a variety of genres, including rhythm & blues, pop, soul, gospel, funk, and jazz. Wonder, who had been blind since birth, was a child prodigy who signed with Motown’s Tamla label at 11 and was given the moniker Little Stevie Wonder. Wonder’s usage of synthesizers and other electronic musical instruments during the 1970s changed R&B norms, making him a virtual one-person band. He also ushered in the album era for the genre, structuring his albums as complete, constant, socially concerned statements with intricate melodies.

With over 100 million albums sold globally, Wonder is one of the most successful musicians. There are 25 Grammy Awards to his name—the most for a solo artist—and he has one Academy Award (Best Original Song, for the 1984 film The Woman in Red). Three music halls of fame have admitted Wonder into their ranks: The R&B/Rock/Songwriters halls of fame. He’s also known for his work as a political activist, particularly his campaign in 1980 to make Martin Luther King Jr.’s birthday a federal holiday in the United States. As a U.N. Messenger of Peace in 2009, he received the Presidential Medal of Freedom in 2014.