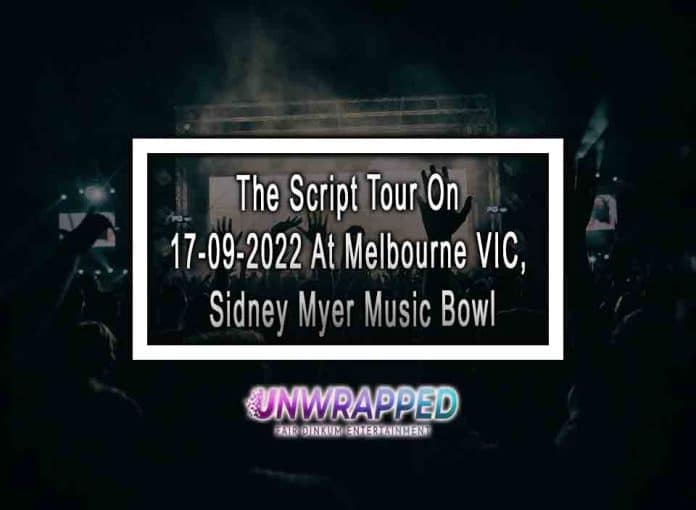 Frontier Touring is happy to bring Dublin three-piece The Script back to Australia after a four-year hiatus. The band will play a spectacular show in Melbourne in September as part of their Greatest Hits Tour 2022. Sunsets & Full Moons adds to the Irish trio’s impressive list of accomplishments over the previous 11 years, including five platinum albums, six billion streams, 30 million single sales, and two million tickets sold at headlining events across the world. Get your tickets early to avoid missing The Script live on Australian soil for the first time in over four years.

The band is on the potential road to support their Tales From The Script album, a collection of their best potential songs and fan favorites from their previous six studio albums. The album features legendary pieces from the trio’s illustrious discography, including the UK #1 smash ‘Hall of Fame’ and Top 10 singles ‘The Man Who Can’t Be Moved,’ ‘For The First Time,’ ‘Superheroes,’ as well as new single ‘I Want It All.’

It also features ‘Breakeven,’ their debut hit ‘We Cry,’ and ‘Rain,’ all hallmarks of their live act. The Script is returning to Australia with their biggest hits and songs with their most recent studio album, Sunsets & Full Moons, over three years after their last release. The group’s sixth studio album, which reached No. 1 in their nation and No. 5 in the UK, was well welcomed by fans and reviewers, garnering more than 143.89 million streams.

The Script is a Dublin-based Irish rock band that started in 2007. In 2008, they launched their debut album. Danny O’Donoghue, lead vocalist and pianist, Mark Sheehan, lead guitarist, and drummer Glen Power make up the band. After signing to Sony Label Group’s Phonogenic label, the band relocated to London. It released its self-titled debut album in August 2008, preceded by the hit songs “The Man Who Can’t Be Moved” and “Breakeven.”

Since 12 years old and growing up in Dublin, Danny O’Donoghue and Mark Sheehan have been great friends. They were previously members of Mytown, a boy band founded in 1996. When they started writing and producing, they were invited to collaborate with a few of their idols, such as Dallas Austin and Montell Jordan. They spent a few years in the United States and were signed to a record label until the firm disbanded and they were dismissed.

Australian Of The Year Awards 2023 What’s it all About?