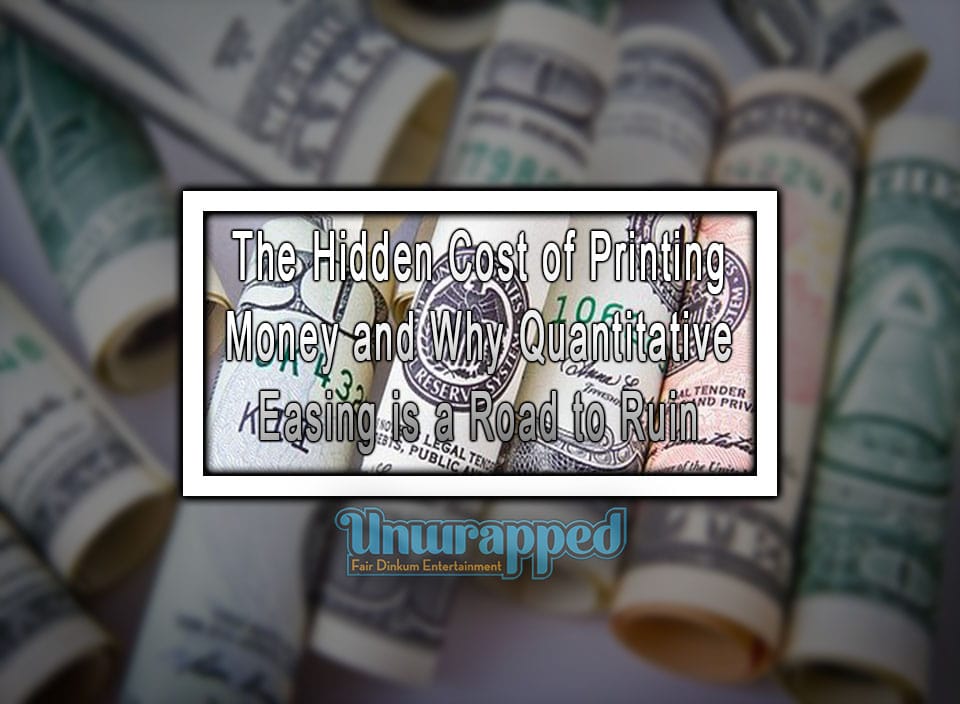 Money Printing Costs and the Influences of Quantitative Easing

Quantitative easing was popularized as a term in the 2008 financial crisis. In the simplest of terms, it means pumping a lot of money in the economy and then “easing” it down. In a more technical manner, it is not so easy to understand.

It is very easy to confuse quantitative easing with the normal manner of creation of money. So for clarity let us very briefly see how money is created, just so that we can keep this out of the equation and avoid any confusion.

1. How is Money Normally Created?

This is how money is normally created. When an economy is facing hyperinflation or stagflation then it can no longer use this method of creating money because the people do not have enough purchasing power to invest the money in the market and instead they focus on savings.

In very simple terms just remember that when a financial crisis hits, the economy dries up in terms of money. When the money dries up because of defaults and loss of purchasing power, people can no longer spend it and this causes the economy to go into recession and possibly into a depression if the recession becomes prolonged.

Without going too much into the technical details, let us look at the aftermath of quantitative easing. The post-2008 world has been heavily focused on debt.

Figure 1 shown above, shows the history of interest rates in the United States. It can be clearly seen that the 2008 crisis didn`t happen overnight. From 2005 there was a savings trend in the US economy where interest rates were increasing. This increase in interest rates, induced savings and therefore reduced the amount of money available in circulation. People were more inclined to save than to spend.

When the 2008 crash finally hit, you can see that the interest rate graph takes a dive. This shows that the government began to rapidly reduce the interest rate to induce spending. This, however, did not have the desired effect as the people were not spending their savings.

The post-2008 crash economy also saw a flat interest rate line. This shows that in the last decade the focus of not the only the USA but almost every economy has been to keep interest rates low in order to invigorate demand. A decade of falling interest rates shows that governments have basically been trying to support the economy on crutches.

Interest rates have to be cut when the money supply starts to dry up and demand falls. A whole decade of falling demand only means that we never really came out of the 2008 crisis instead we have only adopted temporary measures to make everything feel like normal.

3. Quantitative Easing – The Road to Ruin?

Go back to how money is created. The loan given by the central bank goes to the government which then goes to the banks and then to the common people. Under quantitative easing, this does not happen. There is no debt instead reserves are issued to commercial banks and mutual funds, who settle each other’s debt and then the system assumes that this excess liquidity will “trickle-down”.

There is no such thing as a trickle-down effect in this case. Why? Because imagine that you hold government bonds and the central bank is buying government bonds from you. You sell your government bonds to the Central bank for cash. Great, now you have got the cash. So what are you going to do with it? Save it? Interest rates are too low, you won`t get a good return anywhere in the market right now. What else can you do with excess cash? Invest it? Not an option because you know there is no demand in the market and no purchasing power.

What else can you do? Hard to think really. No, not really Any sensible investor looking to maximize his returns would say. Look the Central bank is buying bonds; this means that there is now suddenly a demand for bonds. So why don’t I buy bonds from other investors and sell it to the Central bank? Every investor holding bonds begins to think like this and no suddenly there is more demand for bonds than there is supply.

This rises up the prices of bonds, increasing the wealth of those who already own bonds. There is no trickledown effect here because the investors are buying and selling to each other or the Central bank. This trading is not directly affecting the market of goods and services. It only affects the investment assets market but the common man is not interested in investment assets.

The 2008 crisis wiped off the retirement savings of individuals by up to 30 to 40% and in some cases even 70%. These people weren’t saved by quantitative easing. Many of those who were set to retire by 2012 are still working because their savings were lost when pension funds collapsed.

According to the Bank of England, the quantitative easing regime in the UK pumped around £375 billion into the market but the resultant growth in GDP was only around 1.5-2% which is equivalent to £23-28 billion of extra spending in the real economy.

Quantitative easing, therefore, is an ineffective manner to rescue a crashing economy. Consider it a stop-gap arrangement that puts the economy on a debt ventilator. Quantitative easing does not address the real problem of falling demand and low purchasing power.

Instead it administers a temporary cure that is akin to the injection of steroids to temporarily boost the spending. The trickledown effect is only limited to roughly 20% the remaining 80% goes to increasing the wealth of those who are already ultra rich. So it not only makes the rich richer and the poor poorer but it also puts the economy on a debt ventilator.

Also Enjoy: How to Make and How to Lose Money on the ASX

Paying for paper and ink is no secret, but there are ways to hide it. If your consumables order is not managed properly, you may end up spending a lot more money than you want. Make sure everyone in the office corresponds when ordering and who sends it, so you don’t end up with a closet full of extras.

Also See : The Real Cost of Covid-19 To the Australian Economy

Stay Connected
46,670FansLike
5,664FollowersFollow
840FollowersFollow
Previous articleThe Economics of Quantitative Easing How It Works
Next articleAustralia Must Invest in Defence Now – We Must Not Outsource Security

Features of taking a loan for construction – what nuances to consider?