Skip to content
You are here:Home / President Obama Farewell Address, Mentions Trump Only Once 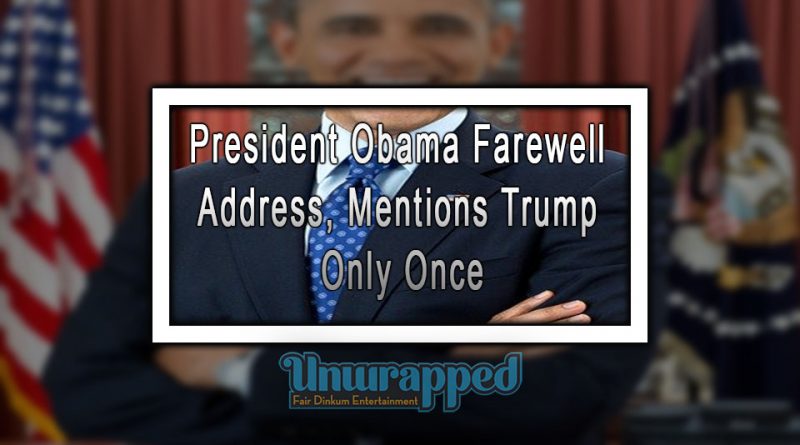 While addressing the nation for the very last time as President from Chicago, Barack Obama asked Americans to seek solidarity and called for a “new social impact.”

In his farewell message, Obama retained the same tone he used in 2008 to propel to the national stage. He asked his supporters not to relent in ensuring they “form a perfect union.”

By shouting his campaign slogan “Yes We Can,” Mr. Obama asked Americans to hold together U.S. values as the countdown to his exit from the Oval Office nears ending.

In an emotional voice and tear welling in his eyes, Mr.Obama extended gratitude to his family and declared he was greatly honored to have served as president. He earnestly prodded the country to live by his vision of progress.

His speech had been regarded as unique by observers, even before he delivered it. For the first time, Barack Obama broke from a tradition set by his predecessors of delivering the farewell speech from the Oval Office. He went to his hometown of Chicago where he was declared victorious in the 2008 and 2012 elections.

Speaking to an emotional crowd of 18,000, Mr.Obama said: “So just as we, as citizens, must remain vigilant against external aggression, we must guard against a weakening of the values that make us who we are.”

He did not mention Mr.Trump who takes over in the next 10 days when he spoke of the transition of power and how important it is. His supporters began to boo but Mr.Obama quickly jumped in. “No, no, no, no, no.” One of the nation’s great strengths, he said, “is the peaceful transfer of power from one president to the next.”

Mr.Trump comes into power on 20th January having made both controversial and progressive promises. Apart from his staunch stand of “cleaning the drain,” a term meant to imply fighting corruption; Donald Trump has raffled a number of feathers. In his campaign pledges, he promised to build a wall on the border with Mexico, temporarily ban Muslims from entering the country, dismantle Obama’s healthcare reform law and upend a global deal to fight climate change.

But Obama was categorical on his stand on the issues throughout the 2016 campaigns. However, after Trump winning the elections, the president has been striking a conciliatory with the president-elect. However, he used his farewell speech to reiterate his position on controversial matters.

“I reject discrimination against Muslim Americans,” he said in a clear reference to Trump, drawing applause. “If anyone can put together a plan that is demonstrably better than the improvements we’ve made to our health care system, that covers as many people at less cost, I will publicly support it.”

It seems his farewell speech was clearly meant to keep off a confrontation with Donald Trump. He mentioned his successor only ones when he advocated for a peaceful transfer of power. However, it was impossible not to see in Obama’s words a repudiation of a Trump-era that is soon beginning. Many expect the president-elect to do a great job of clearing the mess made by his predecessors. However, some do not support him.

But even as Obama tried not to talk of Trump, it was expected that some of his parting words would implicate the incoming president. On the way to Chicago, White House press secretary Josh Earnest told reporters on Air Force One that Obama is “not one to be overly sentimental,” but it would be unrealistic for anyone in his position tonight not to feel some nostalgia.

Mr. Obama was overly emotional while speaking about his wife Michelle Obama.

You took on a role you didn’t ask for and made it your own with grace and grit and style and good humor,” he said. “You made the White House a place that belongs to everybody. And a new generation sets its sights higher because it has you as a role model. You’ve made me proud. You’ve made the country proud.”

Obama didn’t say what his post-presidential plans are but White House spokesperson said that “there will be a time and place” when he would comment on that.

As he concluded his speech, Obama insisted that the citizens “believe. Not in my ability to bring about change – but in yours.”

Also See : Warning! Fear the Rise of Populism: Populism a journey to Sanity

No Restrictions on Use Free Image of Antarctica