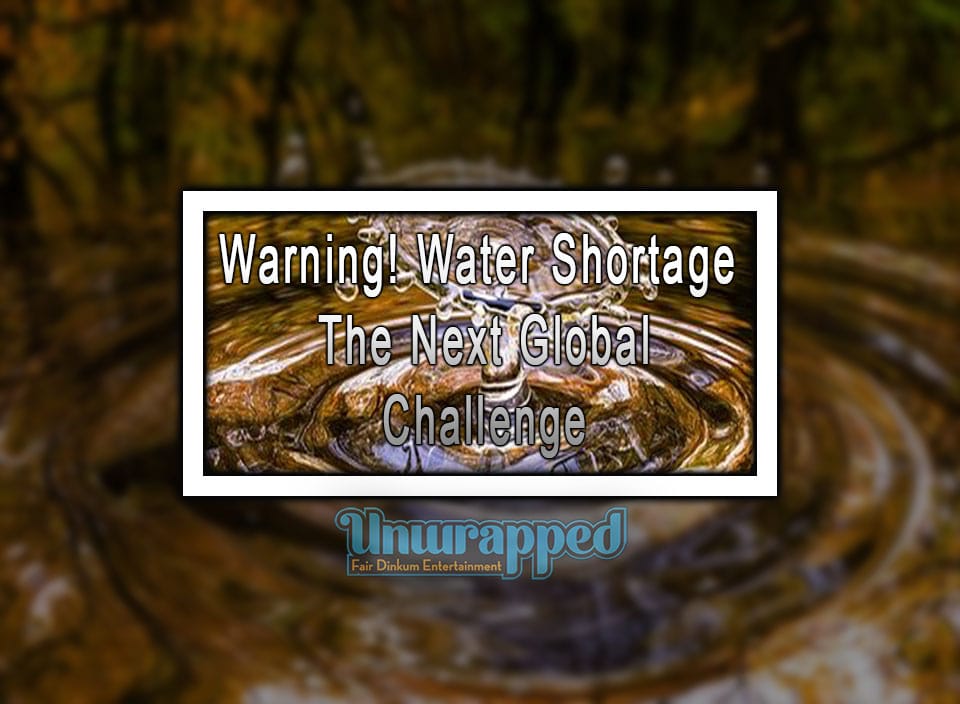 Shortage of Water: The Next Global Challenge.

The next 200 years are going to be rough for humanity. With a drastic labor-lax lifestyle, many of us don’t worry about sustenance. Many of us never consider the possibility of food or water crisis.

Rising sea levels and hotter environments aren’t all there is to global warming. In fact, global warming threatens the very ecosystems that we need to survive as a species.

Global warming will naturally lead to a water crisis, where freshwater runs out! Rivers, wells, and springs will all perish as global temperatures rise!

Consider for a second that only 2% of the world’s water is freshwater. Additionally, 70% of that is stored in ice and glaciers. Glaciers naturally melt into our salty ocean waters, which leads to their loss.

With global warming, we risk losing 70% of our freshwater to oceans that aren’t drinkable.

You see, ocean water is comprised of 3% salt. The human kidney can only clear salt out of the water with a salinity of 2% or less. Other than that, the water is pissed away with the salt. Thus, you’re not doing your body any good by drinking saltwater. In fact, drinking ocean water dehydrates your body.

Global warming also creates extremities in water cycles for different regions. In some areas, global warming can trigger “perennial droughts”. In others, it can trigger destructive floods (1).

The reason for extremities in water cycles would be rain retention. Clouds commonly keep rain for longer periods of time when global temperatures rise. This leads to the deprivation of water in certain areas, and thus drought. In other locations, the excess cloud water is released heavily, triggering floods.

The Consequences of Severe Droughts and Floods

In both situations, the global supply of food is cut short. Drought leads to deforestation, turning once arable lands in waste. Floods destroy growing crops, causing the food to be lost.

With droughts, fresh water evaporates to no return. With floods, destruction occurs to infrastructure that threatens freshwater supplies.

For example, flooding in urban areas causes sewage water to mix with fresh water supplies. Specifically, wells, lakes, and rivers are the most affected.

Thus, the problem could be summed up as one of resource shortage. There’s less water to drink, and the water cycles destroy our ability to farm food.

Food sources can also be compromised due to increasing humidity. As more water gets retained in the air, humidity levels increase. Higher humidity, unfortunately, causes plants to overheat, restricting their ability to grow (2).

Low humidity with higher global temperatures will cause more wildfires (3). Wildfire seasons will increase in length, where more crop fields will perish. This will discourage farmers from agriculture, besides ruining the world’s supply of food.

Can the Resource Shortage Lead to Armed Conflict?

Absolutely. It is a matter of national security after all. If a population can’t eat/drink, then it can’t survive.

It will take a lot of time though for the world to reach a stage of worldwide armed conflict. The issues of food supply, after all, are more about the diminishment of domestic capacities. By this, we mean that each country loses its self-sufficiency capacity over time.

Countries that could feed other countries will have to divert resources for domestic demand. Importer countries that suffer from resource shortages will suffer from lack of supply. This will lead to internal conflict, social instability, and possibly outbreaks of civil wars.

War with other countries is a possibility, but generally, it would be local. Countries with nearby food resources may be under threat of military invasions. This can lead to disruption of worldwide trade routes, and even more rising food prices.

Even now we still suffer from resource shortages! An example would be the Ethiopian famine in the early 1980s. The total victim count of the crisis was 400,000!

Take into consideration that at the time, 80% of the Ethiopian economy was agricultural…

Similar high population countries share the same fate. Examples include Bangladesh. It is a country with a 156 million people, relying mainly on agriculture. Yet, Bangladesh suffers from heavy monsoon rainfalls and flooding. It is also within the range of South East Asia’s tsunami zone.

Even China Suffers From Similar Problems Too

60% of China’s population lives at its Eastern and Southern coastline. That would be a little over 650 million.

Rising sea levels and increased global temperatures endanger the lives of 650 million people. Floods from the ocean can submerge China’s largest cities in the next 100 years. This will force the relocation of half the population, while losing all the infrastructure (4).

China risks loss of its main freshwater supply, this being the Yangtze River. With a population of 1.3 billion, maintaining self-sufficiency without the Yangtze will be impossible. In fact, China’s arable land is almost concentrated entirely to the West. That region is specifically at risk of flooding.

Long-story short, China is going to go hungry within the next century. Being the world’s largest economy, everyone is at risk too!

The Future of Water: Desalination Plants?

Currently, desalination technologies are being used to aid in resolving water shortages. Desert countries without freshwater supplies mainly use this method.

Desalination involves using sea or ocean water. The water is heated to remove impurities and salt. This allows the water to be used for daily household activities. Desalinated water is cleaned thoroughly, making it usable for drinking purposes!

Currently, the largest desalination plant in the world is in Saudi Arabia. It is estimated to provide 264 million gallons of water per day (5). Many countries are also following suit, especially those that lack freshwater. Examples include Greece, Spain, Japan, and China!

The only problem with desalination is that it’s expensive. Regardless, it’s the best alternative available. War and lost lives are much more expensive than higher water bills!

Water is our most precious resource please share your opinions mon how we can best manage our live giving treasure.

Also See : YuuGive – You Shop, We Give supporting charity while shopping