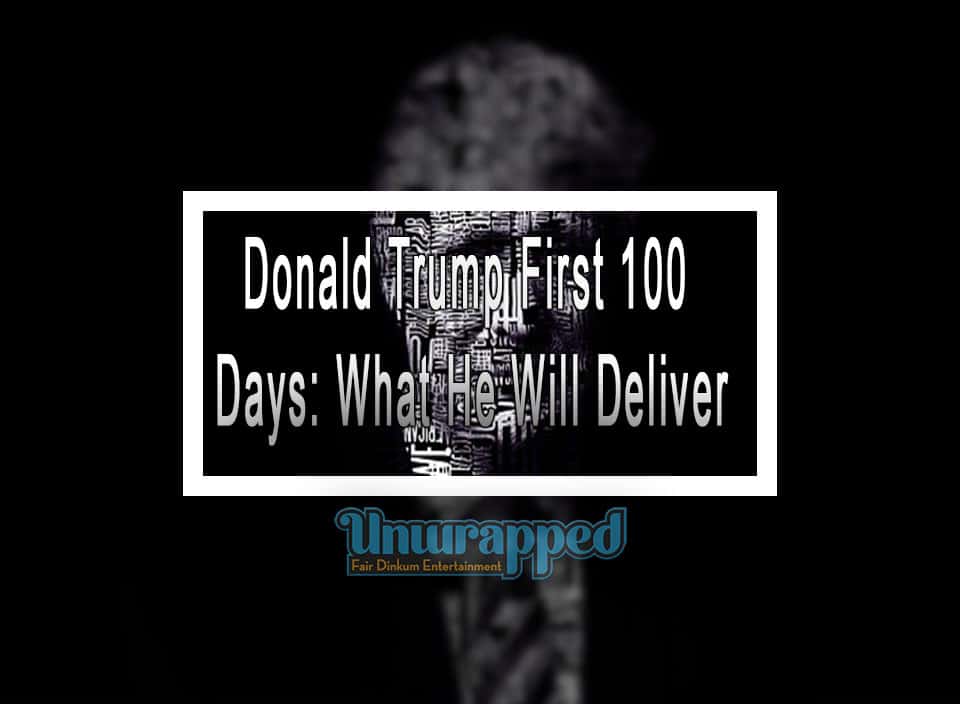 What will Donald Trump Deliver in His  First 100 Days?

On 9th November, the American voters voiced out who they preferred to be the Commander-in-Chief for the next 4 years. They elected Mr. Donald Trump to be their president in a tightly contested election. Hillary Clinton immediately conceded defeat after it became apparent Trump was winning.

Throughout the campaign period, the President-elect outlined major issues he would deal within the first 100 days. He is now set to make these pledges a reality. His plans will see him be very active within the first three months in the Oval Office.

Repealing ObamaCare, proposing new ways to combat immigration, rolling back executive orders, naming a new Supreme Court justice and imposing tariffs are some of the things that will keep him occupied in his first 100 days.

Most of his plans have to do with replacing or reforming laws that most Americans feel are not that effective, improving the country’s image worldwide and bolstering national security. Trump had argued that elected Hillary would be equal to giving Barack Obama another four years in office. He now vows to make a change in the country’s direction in his first days.

Read More : David Davis Address to MPs after Supreme Court – Bill to be published within days

Day One in Office

Starting 20th of January 2017, America and the world will start to call Donald Trump Mr.President. He has already visited the White House, a tradition that seeks to ensure a smooth transition. The two emerged after a 90-minute talk to state that they had a very productive talk.

Mr.Trump told the reporters that he had been briefed on the challenges the country encounters.

His first tasks in the most difficult job will be to nominate a replacement for the Supreme Court Justice Antonin Scalia. The former died in February. Mr.Trump already has a list consisting of 20 names of prominent lawyers, lawmakers and conservative jurists. He says these would be considered for the high court.

The subsequent 99 days will see Mr.Trump “drain the swamp.” This is a symbolic term that implies rooting out the corruption in Washington. He has made a major promise of ensuring members of Congress have term limits.

In addition, he proposes a law that will stop government officials from lobbying the government in five years. The law also prohibits lobbying of these officials on behalf of foreign governments.

Donald Trump has frequently insisted that America doesn’t “win on trade.” For that matter, he promises to instigate fresh negotiations of NAFTA. He also says that China manipulates currency and thus will direct treasury to confront the country.

“First, I will announce my intention to renegotiate NAFTA or withdraw from the deal under Article 2205,” he says. “Second, I will announce our withdrawal from the Trans-Pacific Partnership. Third, I will direct the secretary of the Treasury to label China a currency manipulator.”

Mr.Trump also promised to call a NATO summit and rebalance members’ financial commitment as he renegotiates the Ira nuclear deal.

The Republican nominee make the USA more secure by increasing military investment. He would also fight the ISIS in an “unpredicted” manner so as to catch them by surprise. He has on many occasions criticized the Obama government for announcing military actions before implementation.

Trump’s 100-day plan states that he will “cancel every unconstitutional executive action, memorandum, and order issued by President Obama.”

When it comes to federal regulations, the victorious Republican nominee says that he will require for each nomination it adopts, the government will have to eliminate two active regulations.

The main area of controversy has been Obamacare. But the President-elect has already recognized some of the positives in it. He thus isn’t planning to make a complete overhaul of it.

Also See : Washington Is Ready for Donald Trump Inauguration as the 45th POTUS

Can Australia defend itself Without US Support?