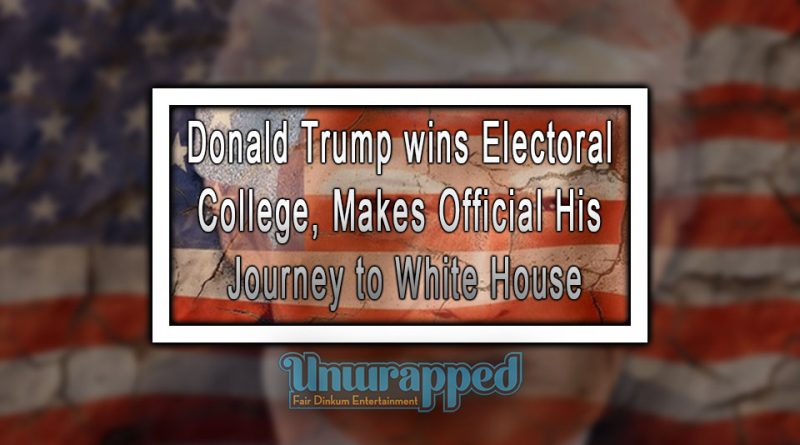 The Electoral College has affirmed that Donald Trump is the next President of the United States, as he crossed the 270 electoral votes.

Calls for Trump to be voted down by members of the Electoral College were roundly ignored on Monday – with only two ‘faithless’ Republican electors rejecting the president-elect and four deserting Democrat Hillary Clinton.

The President-elect had an easy time earning the 270 electoral votes that he needed to book White House for the next four years. This year saw many gain interest in the normally mundane voting process as they protested against Trump’s surprise victory.

Most Trump critics had hoped that Texas electors would revolt against Trump, with some becoming “faithless” electors. But that didn’t happen as he won 36 votes of 38 ballots. This became instrumental in vaulting him past the 270 marks.

With his victory yet again, Trump has spawned a determined effort to stop him from the presidency. The grass-roots advocates pictured him as unfit to step into the office but clearly the electors thought otherwise.

While Mr.Trump’s opponents needed 37 Republican defectors to bring his electoral-vote tally below 270, the bulk of electors who broke ranks — four in Washington State — were Democrats who otherwise would have voted for Ms.Clinton.

“Today marks a historic electoral landslide victory in our nation’s democracy,” Trump said in a statement. “I thank the American people for their overwhelming vote to elect me as their next President of the United States.”

He added, “this election represents a movement that millions of hard-working men and women all across the country stood behind and made possible. With this historic step, we can look forward to the bright future ahead. I will work hard to unite our country and be the President of all Americans.”

Also See : Warning! Fear the Rise of Populism: Populism a journey to Sanity