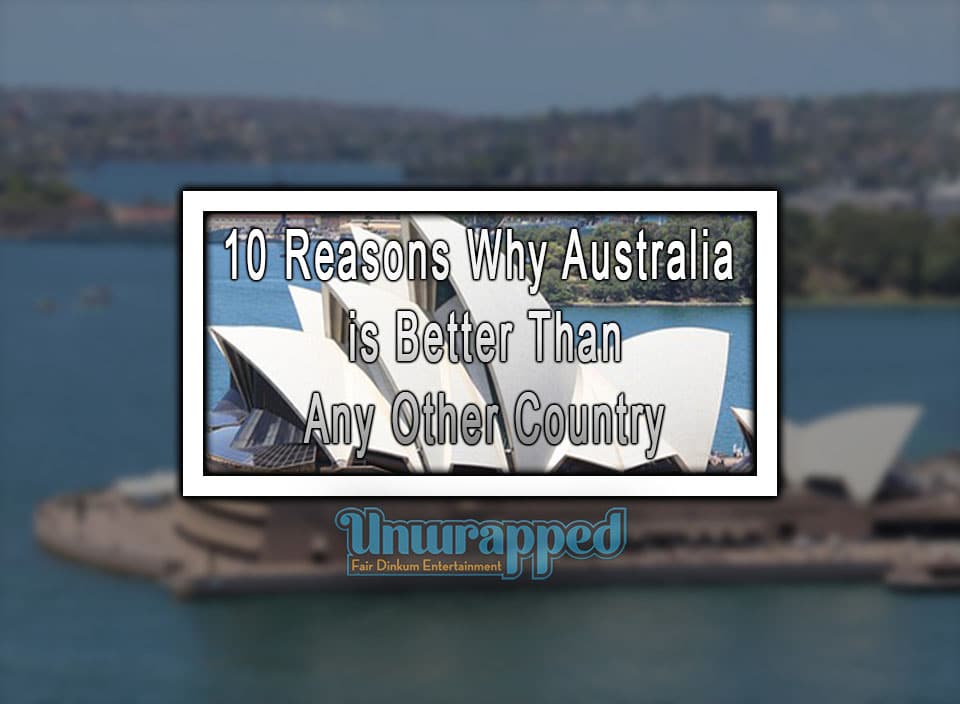 Ten Reasons Why Australia is the Best Country in the World

You don’t have to be an Aussie to know that we have everything of the best the world could offer. As the sixth-largest country on earth with more than 20 million people, it is a vast country with some of the most exotic animal species that range from frightening to the cutest. Here we love living as close to the beach as we possibly can, we love our pies, adore sports and expect to live a long and healthy life in a country where everything is longer, bigger and cleaner.

Australia has one of the world’s best climates that gives you ample opportunity to spend as much time as possible in the outdoors. It also boasts a sporting culture second to none.

2. Highest Minimum Wages in the World

Nowhere else in the world would you get such a high minimum wage. When you compare the minimum wage of Australians to any other country you would find that the pay rate is more than $10 higher than the competitor countries. This includes large countries like the United Kingdom, United States, France and any other country in between.

Australia is one of the world’s healthiest countries for several reasons. Australis offers its people one of the world’s best health care systems. It has one of the lowest infant mortality scores and a high life expectancy. Smoking is low in Australia too with a continuously declining number of smokers.

Read More: How good is the Australian Healthcare

4. The Most Successful Multicultural Country in the World

Research and statistics show that compared to the rest of the world, is Australis the most successful multicultural country. This means lifetime fiscal benefits to the economy. Multiculturism and continuous migrations to Australia have tremendous benefits to the economy. In 2017, Australia had the highest number of migrants with the acceptance and success of the country’s genuine acceptance of all races, religions and cultures underpinning the diversity and generosity of the country.

Aside from English, more than 260 languages are spoken in Australia. Common languages you will hear around Australia include Greek, Cantonese, Arabic, Italian and Mandarin. Chances are very good that whatever language you speak, you will be understood.

Australia is a trusted partner for investment and trade with a globally integrated and open economy. Out of the top ten Forbes Global 2000 industries, eight of them have operations here and nine out of the ten top Global 500 also have operations as well. It opens a trade and international dealings with the world, making Australia a sought-after country to invest in or start a business. We also have a very strong service and goods export market.

Seven of the world’s best universities are in Australia, it includes the Australian National University, the Universities of Melbourne, Sydney, New South Wales, Queensland, Western Australia and Monash University.

Australia scores exceptionally well in all statistics and surveys measuring the quality of life. Out of 230 global countries, Australia ranks fourth. Three of the most livable cities in the world are Canberra, Brisbane, and Adelaide.

Where else in the world can you go to a new beach every day it will take you 27 years if you want to accomplish that. What is more, an Aussie beach is hard to beat. From the magnificent city beaches to the pumping surf of the unspoilt, wild and natural beaches, every beach is a contender to be better than any other beach in the rest of the world.

It is impossible to live in Australia and wonder where you could go on your vacation. This country certainly has it all, from Sydney to Melbourne to The Great Barrier Reef, Giant Pink Lake, Majestic Outback to the unblemished beauty of the Northern Territory, you will love Australia.

Do you realize that Australia has always been ranked as one of the top ten most livable countries in the world? It is a country with more than 19 UNESCO sites, too many beaches to count, accepts all cultures, outstanding healthcare and has also been named the fourth happiest place in the world.

Why is Australia the best country to visit?

One of the most popular reasons to visit Australia is the snorkelling and scuba diving around the Great Barrier Reef. It’s the world’s largest living organism (so big that it has its post box), and the entire Reef is bigger than the United Kingdom, Holland and Switzerland combined!

Also See: Foreign Teaching, Is This Real or Not?