10 Australian Authors to Read and Enjoy in 2023 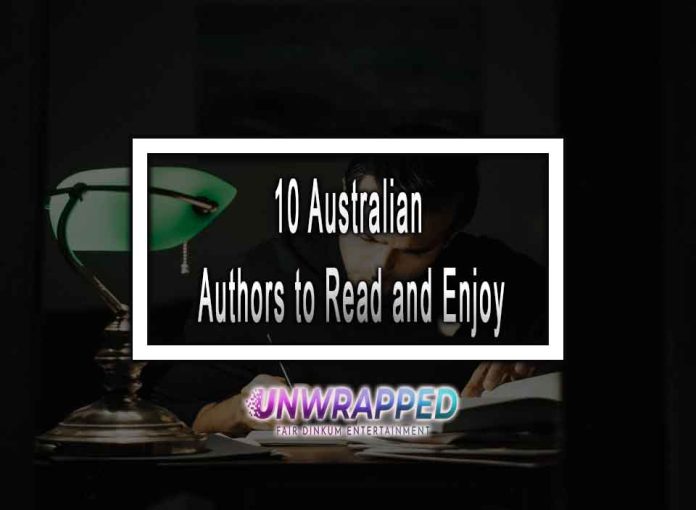 Australia is best known for its nature’s bounties, it’s wild and rare animals and glistening cities. But the least known geniuses in its folds are the authors who are constantly erasing the international boundaries in terms of their popularity. You may have heard and read some of them, but there is a plethora of writers and poets who are hugely talented. They deserve more than what they have gone so far as international recognition goes. Many of the new crop writers of Australia have started drawing critical acclaim from the international guild of writers and breaking into the public consciousness of the world citizenry. There are so many names to mention here that it is near impossible to do justice to all of them. Hence we are going to look at the top 10 Australian authors to read in 2023. This list is by no means an exhaustive one, so do explore more on your own. Also, one to watch for the Future Australian Novelist Ralph K Jones Dystopian and Sci-fi writer.

Matthew Reilly can easily pass off as the most successful Australian author to date. His success can be gauged by the fact that he has been voted thrice as Australia’s Favourite Author, a feat no other author has ever achieved. His style of writing and storytelling is fast-paced and adrenaline-pumping wherein he uses a massive canvas. His list of international bestsellers includes such names as Temple, Ice Station, Area 7, Hover car Racer, Scarecrow Seven Ancient Wonders, The Five Greatest Warriors and The Six Sacred Stones. The list goes on and on from his first self published novel in 1996 titled ‘Contest’ to his extremely popular The Four Legendary Kingdoms. He is published in more than 20 countries and is reported to have sold about 8 million copies all across the globe, with US America and Australia accounting for more than one million copies of his books.

Liane Moriarty has the habit of bursting into No 1 spot of the bestselling list on her novel debut. This she has done with Big Little Lies and also Truly Madly Guilty. She is Australia’s one of the most celebrated authors of all times. She has seven international bestsellers to her credit, which include The Last Anniversary, Three Wishes, The Hypnotist’s Love, What Alice Forgot, Truly Madly Guilty and of course the massive commercial successes titled The Husband’s Secret and Big Little Lies. The Husband’s Secret sold more than 2 million copies and was lapped up by CBS Films for its film rights. Big Little Lies broke into New York Times No 1 spot for bestsellers on its debut itself and was picked up by Nicole Kidman and Reese Witherspoon for its Films and TV rights. Liane has written books for children and has released her latest bestselling book in 2018 named Nine Perfect Strangers.

A big gun of Australia’s literary scene, Tim Winton has published his works in 28 languages across more than 28 books for readers of all ages, including children. He has been one of the most prolific writers of Australia and has been critics favourite. He has a very simple and emphatic style of storytelling which finds easy access to a reader’s heart. He has been widely awarded Australian author right from his first published novel. Open Summer was his debut book which received the Australian Vogel Award in 1981. He has been the recipient of Miles Franklin Award four times for Cloudstreet, Shallows Breath and Dirt Music. In fact, Dirt Music was shortlisted for Brooker Prize. Another of his novel The Rider was shortlisted for Brooker Prize. He has received critical acclaim for his latest release of the novel The Shepherd’s Hut in 2018. He is an author who definitely deserves to be read by 2023.

In the fiction category, Monica McInerney is much acclaimed internationally for her relentless invasion into the bestselling bastion. She is an Australian author who is celebrated for her romantic novels and has been awarded the Romantic Book Awards of Australia in 2011. Her gripping storyline has made many a critic sit up and take notice. She has many memorable novels to her credit. Some of the top-of-the- recall ones are ‘Upside Down Inside Out, A Taste For It, Spin The Bottle, Family Baggage, The Alphabet Sisters and At Home With The Templetons. Her classical novel titled Those Faraday Girls. Won her Australian General Fiction Book Award in 2008 from Australian Book Industry. Altogether Now is her collection of short fiction which again got her nominated for Australian General Fiction Book Award in 2009. In the Popular Fiction category, she was shortlisted in 2010 Irish Book Awards chapter for her novel At Home With The Templetons. The Trip Of A Lifetime is her latest publication of 2018 vintage.

This Australian author becomes a bestseller with each every novel she writes. Her novels travel to 39 countries and get translated into 32 languages. Her first novel writing venture resulted in the much-acclaimed The House at Riverton, which was later also packaged as The Shifting Fog by Allen and Unwin. The House at Riverton was at the top of the UK Bestseller list in 2007 and went on to become the New York Times bestseller in the year 2008. In the same year, it got nominated at the British Book Awards for the Most Popular Book. On the other hand, The Shifting Sand claimed General Fiction Book Award for 2007 from Australian Book Industry Awards. The Forgotten Garden was her second novel winning her top spot in Australian and Spanish bestsellers’ list in 2008 along with becoming Sunday Times No 1 bestseller in the UK. In 2008 this novel climbed to the top of the charts of the New York Times and received the General Fiction Book Award for 2008 from Australian Book Industry Awards. In 2010 she produced her next international bestseller – The Distant Hours followed by The Lake House in 2015, while The Clockmaster’s Daughter is her latest 2018 release.

Credited with five book releases to his name, Markus Zusak has seen his stock skyrocket with his international bestseller The Book Thief. This book has been translated into more than forty languages and has spent more than the last 10 years on the bestseller’s list of New York Times. In 2013 this superstar of a book was adapted for cinemagoers to the big screen by Downtown Abbey and ably directed by Emmy Award-winning director, Brian Percival with a superb cast of Emily Watson, Sophie Nelisse and Geoffrey Rush. The latest book to be released from the author’s stable is Bridge of Clay, 2018 edition. Markus Zusak’s first three book releases were between the year 1991 and 2001, which are The Underdog When Dogs Cry and Fighting Ruben Wolfe. All these novels got a fair amount of international recognition and were amply awarded in his native Australia and the USA.

Widely hailed in Australia as the top-notch author of crime novels, Jane Harper has been a great success with her thrillers. She pens down some nail-biting stuff for which she is popular in more than 35 destinations around the world where her works are published. Her crime novels are very gripping and intriguing for which she has been the recipient of CWA Gold Dagger Award for Best Crime Novel and the Crime and Thriller Book of the Year from the British Book Awards. She has also been awarded Indie Awards Book of the year Australia and Australian Book Industry recognition with the Book of the year. Jane Harper has many international successes and three of her books have been in International bestsellers list, and they are The Lost Man, Force of Nature and The Dry. In fact, The Dry has been so popular that it is slated to be made into a movie starring Eric Bana.

Mem Fox is a truly gifted personality and very loved in Australia. She was born in Australia but soon moved to Africa. She studied drama in England but moved o Australia in 1970 where she is settled in Adelaide ever since. She is the most beloved and talented picture, book author. Her maiden book Possum Magic is the most sold children’s book in Australia ever, selling more than 3 million copies. Her children books Wilfred Gordon and McDonald Partridge have individually sold more than one million copies. Then there is Oprah’s favourite and best children’s book of all times- Time for Bed. Mem Fox has authored more than 30 picture books for children and 5 books for adults in the non-fiction category. She has received many honours and awards, including two honorary doctorates. Her novel Ten Little Fingers and Ten Little Toes were on New York Times bestsellers list for 16 weeks in 2008-2009.

Celeste Barber is an actress, comedian and a writer all rolled into one. She has been a great performer in the entertainment industry besides being an author. She is famous for her comedy shows and often hosts TV Shows. In 2015 her comedy shows for MICF Raw Comedy were sold out for Sydney Comedy and popular Fringe Festival. She has been on The Matt Johns Show and had on and off appearances in Home and Away, How Not to Behave and Wonderland. She has also been a co-host in Studio 10. She has done some social fun experiments like the Celeste Challenge Accepted to gauge reactions of an average person while doing things that rich people do. She is very popular in social media and has a following of more than 3 million. In 2018 she published her bestseller book titled Challenge Accepted. Her popularity in whatever she does keeps on rising.

On the footsteps of Celeste Barber, Vietnamese born Australian Anh Do is an actor, comedian and author. He has been appearing in many Australian Television Shows like Thank God You Are Here. In 2007, he even had a podium finish as runner-Up in Dancing With The Stars. He is a Business Law Degree holder from Sydney’s University of technology. His brother Khoa Do is a film Director and has made many appearances in his brother’s films like Footy Legends. In his film, he was also a producer and co-writer. He had a TV Show airing in his name called Anh Does Vietnam. He is also a prolific writer of great reputation for children books. He has authored three very popular children book series- The WeirDo series, the Ninja Kid series and the Hot Dog series. He has a very balanced professional life where he finds time to pursue all his passions with tremendous success.

Australian authors have regaled the world with their artistry with storytelling. Some stories have been so gripping that they have made it to the Silver Screen. Here we have dispassionately tried to assemble a list of top 10 Australian authors to read in 2023 in terms of their popularity and critical acclaim. You must do yourself a favour by reading some if not all these fabulous Australian authors by the coming year 2023.